To stretch short feed supplies, livestock producers could ammoniate low-quality tall fescue hay. Ammoniated hay is hay placed under a tarp and treated with a maximum of 60 pounds of anhydrous ammonia per ton of hay. After three weeks, the ammonia treatment is complete, and the hay is fairly good quality. It is also affordable in drought years, when hay and feed are limited. Tall fescue hay should cost about $20 per round bale, and it can be treated for an additional $12 per bale.

Low-quality tall fescue hay is ideal for ammoniation. If the hay is high quality, it can become toxic after ammonia treatment and cause crazy cow syndrome when fed. Ammonia treatment has been shown to improve the digestibility of other low-quality hays, even straw. And there may be other crop residues that were baled and could be ammoniated. Recent work conducted at MU showed that even aftermath from tall fescue seed fields could be treated with ammonia to provide a good maintenance feed for overwintering beef cows. 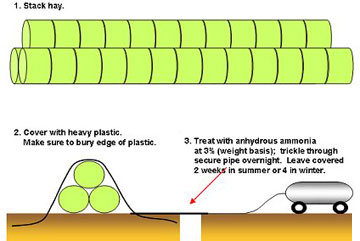 The ammoniation process is simple
Large round bales are most often used, stacked seven at a time — four bales side-by-side with three on top. More than 100 bales fit under a standard 100-foot sheet of plastic. Plastic should be heavy mil, and edges should be secured by covering them in a trench or sealing the edges with waste lime. The ammonia should be added slowly by cracking the valve on the anhydrous ammonia tank and allowing the ammonia to trickle in slowly overnight. Hay should be aired out for one or two days before feeding; this allows the ammonia to clear out for easy handling.