Phyllosticta Needle Blight, caused by Phyllosticta thujae, is a fungal pathogen which primarily infects Arborvitae. The majority of Phyllosticta species are regarded as secondary pathogens on conifers, and many of them are poorly understood. While the infection may not cause death of the tree, the browning needle tips caused by P. Thujae are unsightly for homeowners and landscape designers. Phyllosticta thujae is frequently seen after stressful events that weaken a tree's defenses against pathogen infection. Winter injury, drought stress, excessive pruning, etc. are a few examples of common stressors which lead the pathogen to take hold. 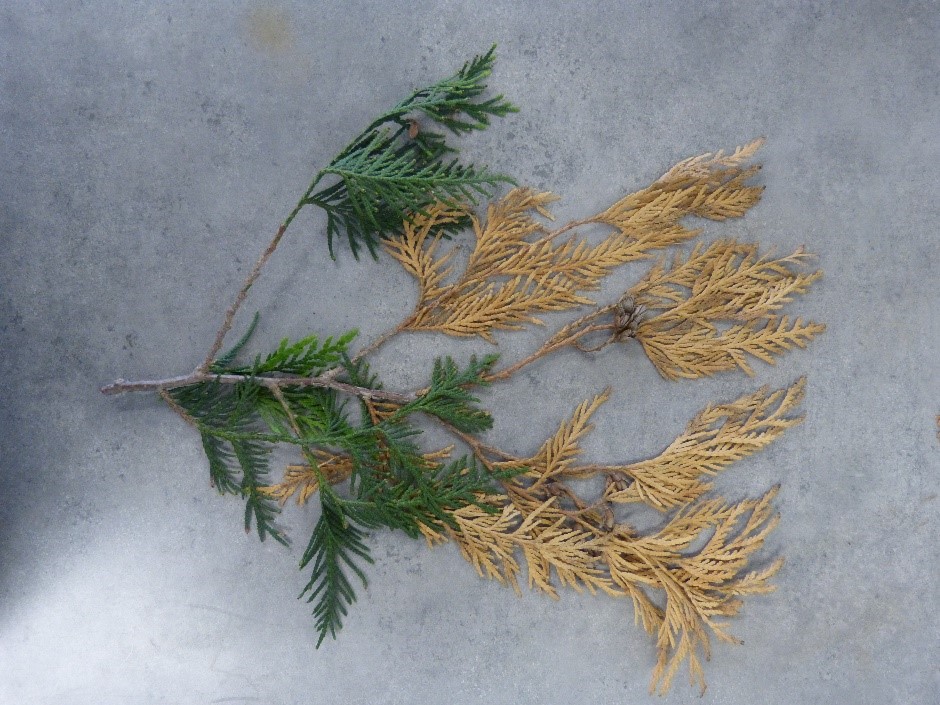 Symptoms and signs: Plants infected with P. thujae generally have blighted needle tips and/or discolored (pale green to yellow) needles that appear dry (Figure 1). Infections frequently start at the needle's tip and spread to the base. When the weather is damp and moderate, black fungal tissue pads called pycnidia burst through the epidermis on symptomatic needles to release vast amounts of spores called conidia, which are then splashed or blown to surrounding shoots to start new infections. The dense canopies of arborvitae, especially those that have been sheared, provide the optimum environment for the growth of pathogens.

Learn more about the life cycle, damage and management of this disease:

The MU Plant Diagnostic Clinic received a peony sample that was diagnosed with Botrytis Blight. It is a very common disease that tends to appear in seasons of conditions with high moisture and warm temperatures. By establishing itself in dead plant matters and forming survival structures, this disease can survive harsh weather in the winter. However, this disease can be controlled and prevented through proper management techniques. 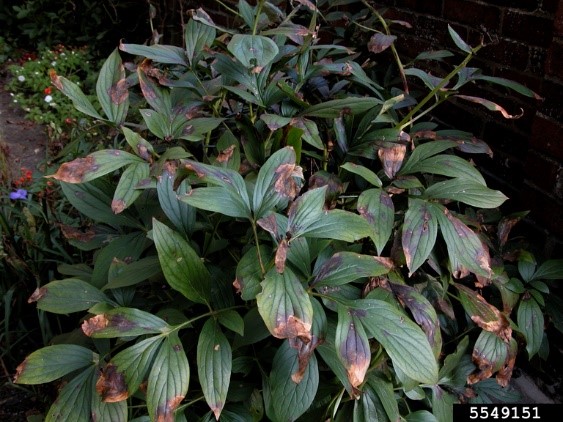 Symptoms and signs: This disease causes symptoms on peonies such as leaf spots, wilting shoots, blackened buds, stem discoloration as well as grey mold (Figure 1). It first starts on the new shoots, causing wilting and discoloration (brown/black). As the disease progresses, it spreads on flower buds, causing the buds to swell and die without opening in severe cases. Meanwhile, it also causes leaf spots and stems discoloration as infected leaves and buds fall off and touch healthy leaves on the way down.

With the weather getting warmer in Missouri and garden season approaching, the MU Plant Diagnostic Clinic wants to bring attention to the Bacterial Canker Disease of Tomatoes. This disease can persist in the soil for long periods of time, so prevention is key. 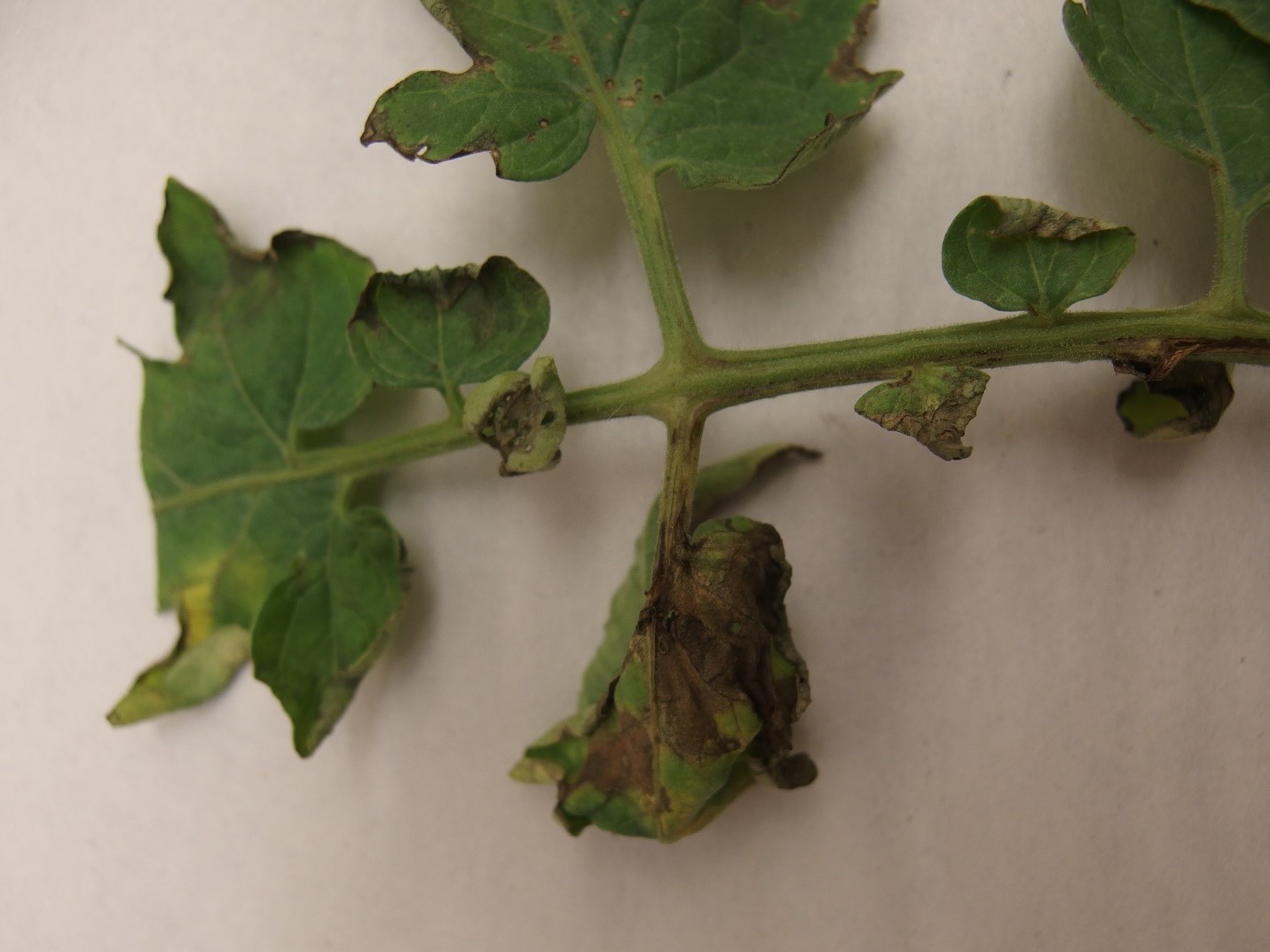 Symptoms and signs: Symptoms of the disease vary based on the age of the tomato plant, different environmental factors, and the type of infection developed. As a result, a diagnosis of the disease on symptoms alone can be difficult and a sample may need to be sent to a diagnostic clinic to confirm the presence of this disease. Symptoms of seedlings include leaf edge discoloration, necrosis and wilting. The leaves on a mature tomato plant become discolored with interveinal chlorosis and necrosis (Figure 1). The stem develops brown streaks in the vascular tissue and often splits forming brown cankers. The fruit develops small, creamy, white and raised spots with tan or brown centers and white margin.

The MU Plant Diagnostic Clinic received a Colorado Blue Spruce sample in March that showed symptoms of needle discoloration and barely distinguishable black spots running along the needles. It was diagnosed as Stigmina Needle Cast disease. 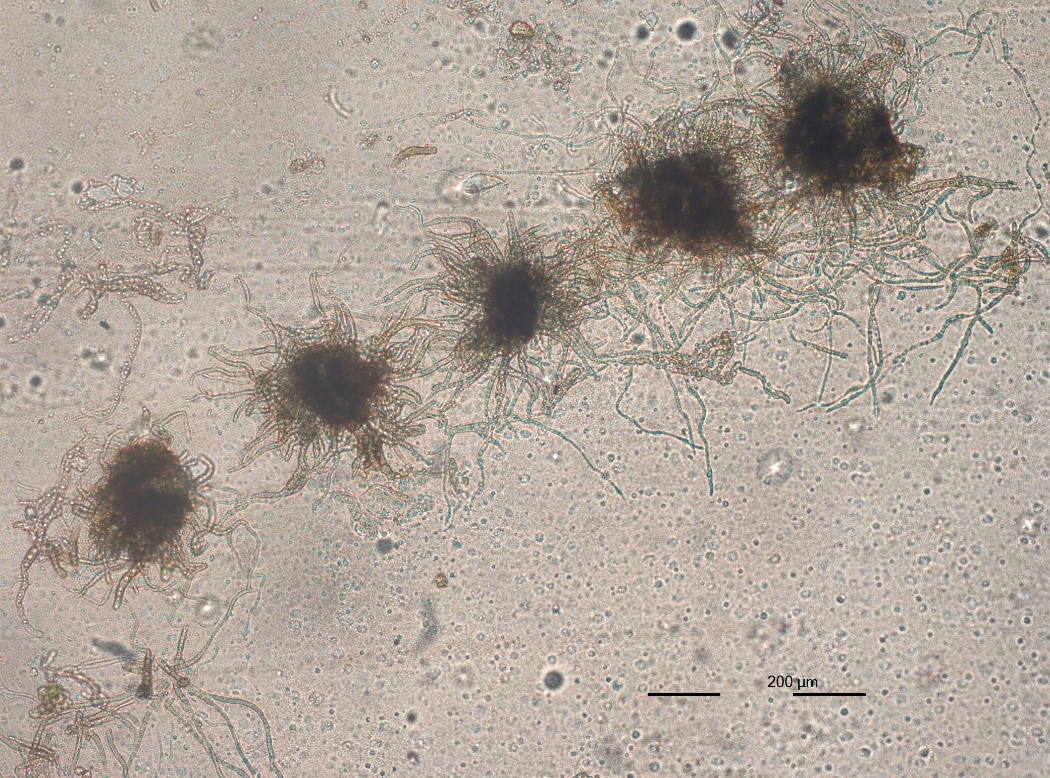 Symptoms and signs: Symptoms of Stigmina Needle Cast progress slowly over a three-year course and eventually develop into needle discoloration and severe needle drop on the lower canopy of the tree. The first sign of the disease are black spots along the needles that are nearly invisible to the naked eye. About one year after the initial infection, symptoms start to become more severe and work their way up the tree to the newer foliage. Needles start to become darker and discolored, ranging from yellow, purple, and brown hues. Severely infected trees under other environmental or cultural pressure may die in the third year.

Bacterial Leaf Scorch (BLS) disease is caused by the bacterium Xylella fastidiosa, which infects the xylem of susceptible trees. This disease is transmitted by insect vectors, primarily sapsucking leafhoppers, though infection by root grafts are known to have occurred. Xylems infected with BLS eventually become blocked and are unable to transport water and nutrients from the tree roots to leaf tips. There is no cure for BLS and an infected tree will progressively decline and reach mortality in 5-8 years.

Xyllela fastidiosa affects a variety of oak species, elm, maple, mulberry, sweetgum, and sycamore. Symptoms of BLS include marginal scorching that slowly spreads inward towards the main veins, further leading to twig dieback (Figure 1). BLS symptoms are similar to drought stress and can be difficult to distinguish between them. Timing of onset of symptoms is generally a differentiation between drought stress and BLS as drought stress injury occurs soon after an environmental event whereas BLS symptoms tend to develop in mid-summer and progressively worsen into fall. A variety of hosts may also exhibit a halo type ring at the scorched boundary. Indeed, BLS symptoms are also often confused with those of Oak wilt and Tubakia leaf spot.

Learn more about the diagnosis and management of this disease: