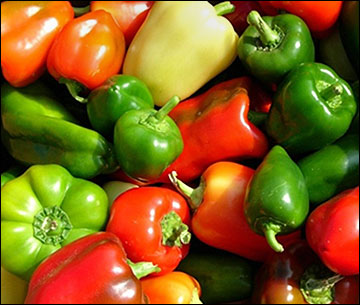 Peppers (Capsicum sp. L.) are popular warm-season vegetables for commercial production in Missouri. Peppers are in the Solanaceae plant family and are botanically related to other popular garden vegetables such as tomatoes, potatoes and eggplants. As such, peppers share the same spectrum of pest problems and should not be rotated with these crops.

Like beans, potatoes, pumpkins and sweet corn, the pepper is native to the New World. Originating in Mexico and Central America, it was reintroduced into North America from Europe by Columbus. In tropical regions, the pepper grows as a perennial plant, but because it is tender and easily killed by frost, it is cultivated as an annual in temperate regions such as Missouri.

Pepper plants have a relatively short and bushy architecture with a tough stem and a shallow root system. The flowers are predominantly self-pollinated although bees can improve fruit set of peppers. Peppers are generally classified based on fruit type, the major distinction being between fruit that is pungent (cayenne, jalapeno, Tabasco) and fruit that is sweet (bells, frying peppers, pimentos, paprika). Pungency in pepper is derived from capsaicin, a plant chemical that is concentrated in the placenta of the fruit around the seeds. Peppers have considerable nutritional value as they contain high levels of vitamins A and C and significant amounts of potassium.

Peppers should be established in the field as transplants because pepper seeds are slow to germinate in field soil. Direct-seeded peppers do not germinate evenly, resulting in an uneven plant stand. Transplants grow more evenly, which increases harvest efficiency. Transplants are produced by sowing pepper seeds about 3/4 inch deep in transplant trays or flats filled with soilless germination media and allowing the plants to grow for six to nine weeks in a greenhouse. The optimal temperature for germination of peppers is 80 to 85 degrees F, but plants should be grown at 70 to 75 degrees F. Research has revealed that growing peppers in larger tray cell sizes (50 or 72 cells per tray) or containers will produce larger transplants. This practice increases early yield but not overall marketable yield. One ounce of seed will produce about 1,500 to 2,000 graded transplants for planting in the field.

Peppers require warmer growing temperatures than tomatoes and are typically transplanted into the field about two weeks later than tomatoes. To ensure the pepper transplants will be able to withstand the stress of the field environment, harden off the plants by reducing the level of fertilization about one week before transplanting. Do not plant transplants that have flowers or small fruit on them. Pinching off all flowers and small fruit present on the transplants will channel energy into production of new roots and leaves. During periods of cool, wet weather, peppers will grow poorly. Using black plastic mulches to increase the soil temperature for early plantings will be beneficial. Excessively high or low air temperatures (higher than 94 degrees F or lower than 50 degrees F) can reduce fruit set of peppers by causing flowers to drop from the plant.

Peppers perform best in a well-drained, loamy soil with a pH ranging from 6.0 to 7.0.

Peppers can be planted in single rows or twin (double) rows on a raised bed. Double rows increase plant populations and marketable yields. Typically for commercial production, peppers are established on plastic mulch with drip irrigation. Black plastic is commonly used for early-season production, and white plastic or organic mulches (straw, compost), which cool the root zone, are effective for summer plantings.

Peppers are spaced 12 to 24 inches between plants with each row or bed 4 to 5 feet on center. If a double row is used, rows are spaced about 18 inches apart on the bed and plants are spaced in an alternating or zigzag pattern. Typical plant populations are 10,000 to 12,000 plants per acre.

Peppers have a shallow root system, and when fruit loads are heavy, the plant will begin to bend. Staking peppers maintains an upright plant, prevents the plant from splitting during a heavy fruit load, and reduces the incidence of sunscald on the pepper fruit. Staking involves placing a wooden or metal stake every 3 to 4 linear feet of row and using tomato (nylon) twine along the outside of each row to support the plants.

About 80 pounds of actual nitrogen per acre (1.8 pounds per 1,000 square feet) is applied before transplanting peppers. Do not use a high rate of preplant nitrogen because it can reduce fruit set of peppers. An additional 50 pounds (1.1 pounds per 1,000 square feet) can be applied over the course of the growing season either through drip irrigation lines or as a side-dress application four weeks after transplanting. Avoid using high rates of ammonium nitrogen fertilizers, which could reduce uptake of calcium and trigger blossom end rot.

Fertilizer can be broadcast over the field or banded over each raised bed. If the fertilizer is banded on the raised bed, the rate is calculated based on the width and length of each bed and not the entire field or plot planted to peppers. A starter solution containing nitrogen and phosphorus is applied immediately after transplanting. Based on a recent soil test, up to 150 pounds per acre (3.4 pounds per 1,000 square feet) of phosphorus (P2O5) and 200 pounds per acre (4.6 pounds per 1,000 square feet) of potassium (K2O) should be applied.

Peppers have a relatively shallow root system and thus are susceptible to moisture stress.

Moisture stress will cause flowers and small fruit to drop and will reduce leaf area, causing the fruit to be sun-scalded. Failure to apply adequate water can also exacerbate blossom end rot of peppers. Irrigation is particularly crucial during transplanting, flowering and fruit set. Mulching with organic mulches, such as straw or compost, or plastics can reduce soil moisture loss. Applying too much water to peppers or planting in poorly drained soil can trigger serious diseases such as phytophthora blight.

High tunnels are plastic-covered, solar-heated greenhouses that can be used to extend the pepper growing season. Crops are grown directly in the soil without artificial media. High tunnels protect the growing crop from extremes in temperature, wind and rainfall, as well as many pests. For warm-season crops such as peppers, high tunnels are especially beneficial because they accelerate growth of the plants by significantly increasing average daily temperatures. In Missouri, peppers can be established in high tunnels about one month earlier than they typically are established in the field or garden, allowing growers to have early-season peppers for local markets. A commercial high tunnel typically is 2,500 to 3,000 square feet and can accommodate 700 to 800 pepper plants.

Peppers are planted on raised beds as single or double rows on plastic mulch with one or two lines of drip irrigation per bed. Row covers may be needed to protect the peppers from light frosts in spring and fall. In Missouri, peppers can be transplanted within high tunnels in early April through mid-July and harvested through November. With the use of shade cloth to prevent sunscald of ripening peppers, high tunnels promote production of high-quality colored bell peppers. Insect screens can be placed over the vents of the high tunnel to prevent invasion by the European corn borer and other serious insect pests.

Peppers can be attacked by several diseases, including bacterial leaf spot, phytophthora blight, anthracnose and viruses. Choosing a resistant variety of peppers is the most effective management strategy for controlling diseases. (See Table 1.)

Blossom end rot is a common physiological disorder affecting sweet peppers. Blossom end rot starts as a water-soaked lesion on the bottom (blossom end) or side of the pepper fruit wall. Eventually the lesion becomes discolored and papery dry, making the fruit unmarketable. Blossom end rot is directly correlated to a calcium deficiency in the fruit. Because calcium enters the fruit by water uptake, blossom end rot can be triggered by extended periods of dry weather followed by heavy rains, when calcium does not enter the fruit in sufficient amounts. Low soil calcium (low pH) can be a direct cause of blossom end rot, so a soil test should be performed to determine the base level of calcium in the soil.

Weeds can significantly lower yield and quality of peppers. Mulching peppers will reduce weed emergence. Research has revealed that shallow cultivation for about 40 days, followed by application of organic mulch, is the most effective way to suppress weeds without the use of herbicides.

This table lists the author’s suggested varieties and is not intended to be comprehensive.
*Approximate dates of maturity from transplanting. Add an additional 10 to 14 days for full color development.

The standard box for sweet peppers is a 11/9-bushel box weighing about 28 pounds. A good yield of peppers is 700 to 800 bushels, or boxes, per acre.

Peppers should be cooled immediately after harvest to preserve quality. The optimal temperature for cooling peppers is 50 degrees F at 95 percent relative humidity. To avoid chilling injury, do not expose peppers to temperatures lower than 45 degrees F. Long-term exposure to temperatures greater than 50 degrees F can cause the peppers to change color, lose fresh weight and decay. Peppers should not be immersed in water immediately after harvest because water can seep into the fruit cavity and cause the fruit to rot.