The production of beautiful, blemish-free apples in a backyard setting is challenging in the Midwest. Temperature extremes, high humidity, and intense insect and disease pressure make it difficult to produce perfect fruit like that purchased in a grocery store. However, careful planning in selecting the apple cultivar and rootstock, locating and preparing the site for planting, and establishing a season-long routine for pruning, fertilizing, watering, and spraying will greatly enhance the flavor and appearance of apples grown at home.

How many to plant? 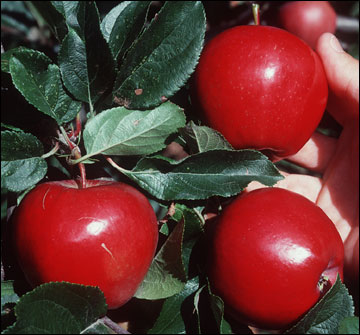 In most cases, the fruit produced from two apple trees will be more than sufficient to supply a family of four. In most cases, two different apple cultivars are needed to ensure adequate pollination. Alternatively, a crabapple tree may be used to pollinate an apple tree. A mature dwarf apple tree will generally produce 3 to 6 bushels of fruit. One bushel is equal to 42 pounds. A semidwarf tree will produce 6 to 10 bushels of apples. After harvest, it is difficult to store a large quantity of fruit in a home refrigerator. Most apple cultivars will quickly deteriorate without adequate cold storage below 40 degrees Fahrenheit.

What cultivar or rootstock to plant?

Because Missouri's climate is favorable for fire blight, powdery mildew, scab, and cedar apple rust, disease-resistant cultivars are recommended to minimize the need for spraying fungicides. Popular midwestern cultivars such as Jonathan and Gala are extremely susceptible to fire blight and thus are difficult to grow because they require diligent spraying. Liberty is a high-quality tart apple that is resistant to the four major diseases and can be successfully grown in Missouri.

Apple trees on dwarfing rootstocks are recommended to facilitate training, pruning, spraying and harvesting. Trees on dwarfing rootstocks also start producing fruit the second season after planting and generally have a life span of about 20 years. A dwarf tree can still be 15 feet tall when grown in Missouri. When purchasing a tree from a nursery, often the consumer does not get to choose the rootstock that induces the dwarfing habit of the trees. However, when it is possible to select the rootstock, G-16 and M. 9 are recommended. M.9 rootstock is susceptible to fire blight when environmental conditions are favorable for the disease and can be injured by freezing temperatures in early fall before the tree is acclimated to cold weather. Apple trees on semidwarf rootstocks such as M.7A or G.30 are large trees (up to 20 feet tall) at maturity. Trees on semidwarf rootstocks generally begin to produce fruit four years after planting and continue to bear for 25 years. Trees on M.7A rootstock are vigorous, but produce several rootstock suckers, which should be pruned annually. In Missouri, M.26 rootstock should be avoided because of its susceptibility to fire blight. Another problematic rootstock is MM.106, which is susceptible to crown rot disease during rainy seasons. 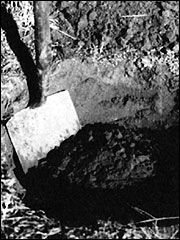 Figure 1
Dig hole 2 feet wider than the spread of the roots. 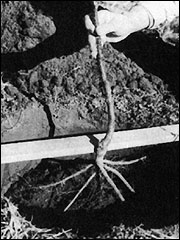 Figure 2
Plant tree at the same depth it was planted in the nursery. 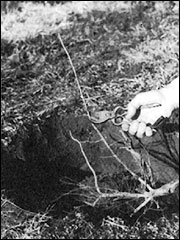 Figure 3
Trim broken and crossed roots and shorten all roots to about 18 inches. 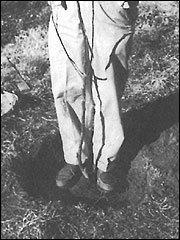 Figure 4
Tamp the soil with your foot as the hole is filled.

One month after spring planting, apply about a half pound of 12-12-12 (or similar analysis) fertilizer per tree in a circular band around the edge of the original planting hole. The year after planting, apply about one pound of 12-12-12 fertilizer per tree in a circular band under the drip line of the tree canopy just before growth begins in the spring. In subsequent years, fertilizer needs will probably increase; the amount of fertilizer to apply can be gauged by the terminal growth made the preceding year. Young trees (one to six years old) should have 12 to 18 inches of new grow each year and 6 to 12 inches of growth thereafter. Growth above or below these figures would indicate too much or too little fertilizer. After inspecting the amount of terminal growth, the amount of fertilizer can be adjusted from the amount applied the previous year. In a year when the blossoms are injured by frost and the crop is lost, do not apply any fertilizer because it will promote too much vegetative growth.

When cultural control of pests is ineffective or impractical, chemicals often are needed to control the pests. To control pests chemically,

By the third year (fruiting year) after planting, obtain an adequate sprayer of some kind. A compressed air sprayer or knapsack sprayer is adequate for a limited number of dwarf trees.