Fire blight is a bacterial disease affecting apple, crabapple, pear, hawthorn, pyracantha (firethorn) and related species. The bacteria commonly overwinter in cankers (sunken diseased areas) on the tree, which produce a sticky exudate in early spring (Figure 1). The bac­teria are usually spread from the cankers by insects and by wind-blown rain. Careless pruning practices may also spread the bacteria. 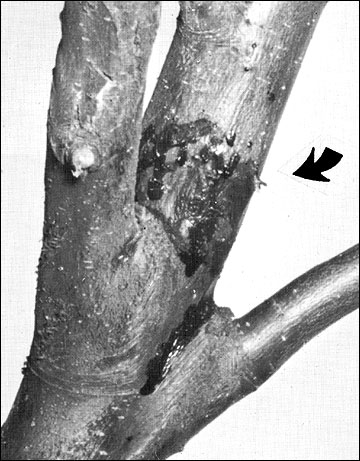 Figure 1
The arrow points to a fire blight canker on a large limb.

Blossom blight
The blossoms on susceptible trees are usually the first plant parts to become infected in the spring. This is partly because of their attractiveness to insects, which carry the bacteria from the cankers. Bacteria multiply rapidly in the blossom nectar and infect the blossoms through natural openings called nectaries. Infected blossoms turn brown and die, usually with the flower parts remaining attached.

Shoot or terminal blight
The succulent new shoot growth also is susceptible to bacterial infection in the spring and early summer. When infected, the tender tips wilt, die and assume a characteristic shepherd’s-crook appearance (Figure 2). These infections often kill a foot or more of the terminal growth. Apple leaves and shoots turn a rusty brown color; in pears, these parts turn black (Figure 3). In either case, the dead leaves remain attached to the dried shoots. 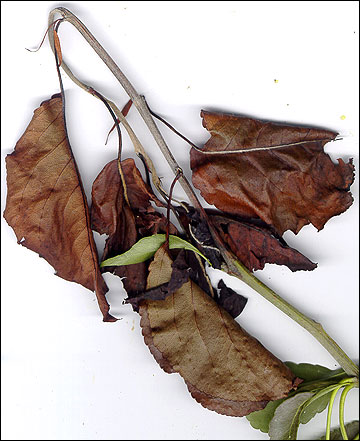 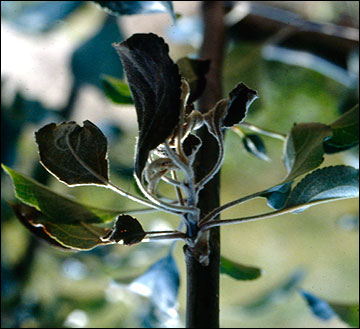 Cankers
Fire blight cankers of various sizes can develop on twigs, limbs and even the trunks of trees. The bacteria can colonize natural openings in the bark, such as lenticels, and areas where the bark has been wounded from pruning cuts, hail damage or mechanical damage; or it can move systemically through the tissues of the plant from infected blossoms or shoots. In either case, the infected area will become discolored and superficially sunken. Cankered areas do not penetrate deeply into the wood. A sticky ooze containing billions of bacterial cells often develops in the region of these cankers in the spring and early summer, especially during wet weather. Because of the high sugar content of this ooze, infected limbs and cankered areas often develop a sooty black overgrowth of fungi.

Cultivar selection
Fire blight is one of the most difficult diseases to control. One of the best ways to avoid fire blight is to avoid planting cultivars that are susceptible.

Apple cultivars that are the most highly susceptible are Gala, Jonathan, Lodi, York, Suncrisp, Braeburn, Fuji, Granny Smith and Mutsu. Golden Delicious, Redfree, Winesap and York apples are also susceptible to fire blight and usually require control when conditions are favorable for infection. Arkansas Black, Red Delicious, Empire and Liberty are moderately resistant and usually do not require special treatment for fire blight.

Pruning
Eliminate fire blight infections by pruning out diseased branches. Dormant pruning to remove overwintering infections helps reduce inoculum for the next season. Remove pruned material from the orchard. Beginning about one week after petal fall, monitor the orchard to locate blighted limbs for removal. On young trees, and those on dwarfing rootstocks, early strikes in the tops of the trees often provide inoculum for later infections of shoots and sprouts on lower limbs near the trunk, which may result in tree loss. Give these early strikes in the tops of trees a high priority for removal. Always cut an infected branch at least 8 to 12 inches below the visible injury or canker. In May or June, when blight bacteria are moving rapidly, a greater distance below infections may be required on major branches, scaffolds or trunks. Ideally, an infected shoot or branch should be removed at its point of attachment, without damaging the branch collar. The appearance of new infections below a pruning cut indicates that the cuts were not made far enough below the infection and the bacteria had already spread past the cutting point.

To avoid spreading bacteria during pruning, dip or spray the pruning tool before each cut with a 10 percent solution of bleach (one part bleach to nine parts water). Dry and oil tools after use to prevent rust.

Control with pesticide
Streptomycin is a bactericide used to control fire blight. Various products are labeled for application to apples, pears and ornamentals. Sprays are generally applied when wet weather occurs during bloom and temperatures are 60 to 75 degrees F. A minimum of two applications is necessary to provide control. Consult the label for specific application instructions.

Fertilization
Fire blight has been observed to be most severe on vigorously growing trees. For this reason, pay careful attention to the amount of fertilizer applied, especially nitrogen fertilizer. Adjust nitrogen fertilizer treatments so that bearing apple trees produce no more than 10 to 12 inches of new terminal growth in any given season; pear trees, no more than about 6 to 8 inches. With ornamental species such as pyracantha that respond to low levels of nitrogen, withhold all nitrogen fertilizer until the plant shows lack of vigor. Keep in mind that fertilizers applied to lawns also will be available to the tree roots.

Fire blight runs in cycles
This disease may appear for several years in various degrees of severity, then show little or no damage for a few years. Fire blight is most severe in springs when

These conditions promote rapid development of succulent shoots and blossoms that favor both the rapid multiplication and subsequent dissemination of the bacteria. During seasons like this, homeowners with susceptible ornamental and fruit plantings need to be especially diligent in their fire blight control programs.