New apple cultivars often command higher prices than some older cultivars such as Jonathan, Red and Golden Delicious. If a grower can bring a new apple into production while it is in demand, a new cultivar can be more profitable to produce than an older one. High-density orchard systems of more than 500 trees per acre, such as the vertical axis system, can be used to produce fruit in the second or third year after planting. In contrast, low-density orchard systems of 150 to 200 trees per acre generally require five years to come into production.

Intensive production systems such as the vertical axis system have additional benefits other than early production of fruit. Pruning and harvesting costs are reduced due to the small size of the trees, and less spray material is applied to the dwarf trees. But these systems have disadvantages as well. The cost of establishment, which includes installing a trellis system, is higher. Also, more intensive management techniques are required, as disease and insect pests can spread rapidly among closely planted trees.

In the vertical axis system, the trees are trained and maintained in a narrow pyramidal shape with a dominant central leader to maximize light penetration within the tree canopy. The central leader is trained to grow vertically to a height of about 10 feet. In this system, few pruning cuts are made during the first three years after planting until the trees have begun to grow together. Thereafter, lateral branches are periodically renewed by cutting into 2-year-old or older growth. Trees are supported by a trellis, consisting of a conduit or a wooden post at each tree with at least one wire connecting the tops of the posts (Figure 1). 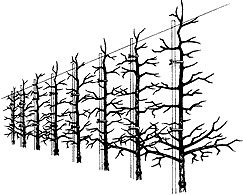 Figure 1
Apple trees on a dwarfing rootstock trained to a vertical axis system.

To properly manage the trees in a vertical axis system, the growth habit of the apple cultivar must be matched with the correct rootstock at an appropriate spacing. The two dwarfing rootstocks recommended for vertical axis orchards in Missouri are B.9 and M.9 rootstocks. B.9 rootstock is less susceptible to low temperature injury and produces a slightly smaller tree than M.9 rootstock.

Because most orchard sites in Missouri produce vigorous-growing trees, a recommended spacing for a non-spur cultivar on B.9 or M.9 rootstock is 6 feet between trees within the rows and 14 feet between the rows, for a total of 518 trees per acre. Spacings may be reduced if trees are located on a re-plant site or on hardpan soil. Tree spacings may be increased when trees are grown in very fertile soils. Equipment size, including tractor width, also influences the spacing between rows.

Purchased trees often lack these specifications. In this case, remove any branches or “feathers” that are within 18 inches of the soil surface. Also remove branches that are at a narrow angle to the central axis or that are not evenly spaced around the leader.

If the tree has only two branches, cut them back to the trunk and head, or prune, the leader at 30 to 32 inches from the soil surface to promote the growth of new lateral branches. When the new central leader has grown about 18 inches, remove the first, second and third shoots that are located near the tip of the leader, leaving the lower branches to develop into scaffold limbs. The leader should also be tied to the post at this time.

In early July, any branches that are at less than a 60-degree angle from the central leader should be spread or tied down to this angle (Figure 3A). Wire or plastic tree spreaders and other products available commercially can be used.

Clothespins attached to a cement weight by a wire also can be used to increase limb angle (Figure 3B). These weights can be made inexpensively. When using cement weights, however, the branch initially should be weighted at slightly less than a 60-degree angle, as the branch angle will increase with time.

Branches that are nearly horizontal are undesirable because they tend to produce few fruiting spurs and grow vegetatively, which decreases light penetration within the tree. Upright sprouts that were not spread during July should be removed later in the growing season or during dormancy. Tree weights can be removed from limbs any time after late August.

Figure 2
(A) An ideal tree for planting in a vertical axis system. (B) Branches at a narrow angle to the central axis are removed and the leader is cut back on poorly branched trees at planting. 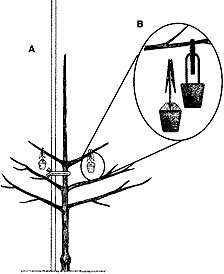 Figure 3
(A) Limbs are spread in early July of the first growing season to a 60-degree angle from trunk. (B) Clothespins attached to weights can be used to spread limbs.

In March, maintain the narrow pyramidal shape of the tree by removing any vigorous shoots that are competing with the central leader (Figure 4). After fruit set, two or three apples may be left on the tree; however, most of the apples should be removed by June. Too much fruit inhibits the vegetative growth of limbs and subsequently reduces the lifespan of the tree. In July, limbs at less than a 60-degree angle should be spread or weighted. Sucker growth that was not spread during the summer can be removed during the fall or dormant season. 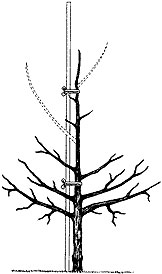 Figure 4
In early spring of the second growing season, remove vigorous shoots that compete with the central leader.

Remove vigorous shoots that compete with the leader in early spring. Continue to spread the branches near the top of the tree in early July. By this time, branch angles are set in the lower part of the tree. Tie the central leader to the post for support. The leader should be near the top of the post — about 8 feet tall — by mid-June. You will need to thin fruit to prevent limb breakage and to improve fruit size and quality.

In the dormant season, prune the lower branches of adjacent trees that have grown together. Cut back into 2-year-old or older wood to a less vigorous lateral branch to maintain the narrow pyramidal tree form (Figure 5). Do not cut into 1-year-old wood, as this promotes excessive growth. Remove downward-hanging branches. 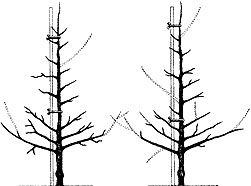 Figure 5
In the dormant season after the third year, prune the lower branches of adjacent trees that have grown together.

The height of mature trees in a vertical axis orchard system is usually about 10 feet. After the central leader grows beyond the top of the post, it can be bent over and tied to the top wire to limit the tree’s size (Figure 6A), or it can be pruned back to a less vigorous lateral branch on 2-year-old wood during the dormant season (Figure 6B). In the vertical axis system, the lower limbs are permanent, but they are periodically shortened by pruning cuts into 2-year-old or older wood. To maintain the narrow form in the upper part of the tree and renew branches, cuts should be made near the central axis. Vegetative buds at the base of stub cuts will produce a new branch and ensure new fruiting wood is present. Branches that are positioned directly above another branch and shade lower limbs should be removed. 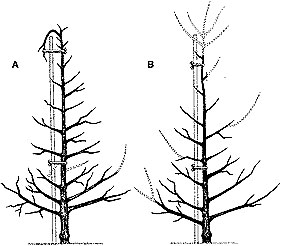 Figure 6
(A) To limit the height of the tree, the central leader can be bent over and tied to the post, or (B) cut back to a less vigorous lateral branch to form a new leader.

Sometimes a tree may lack limbs on one side. To correct this situation, a nearby branch or shoot can be redirected by tying it in a position that will make it grow into the vacant space. The following year, additional new growth will fill the space.

Mature trees that have not been carefully maintained will have a round shape or will be wider at the top than at the bottom. Trees in this condition require major cuts near the trunk in the top one-third of the tree and stub cuts to remove entire branches (Figure 7). When a tree is not maintained in a narrow pyramidal form, shading within the tree reduces fruit set and quality.

Upright sucker growth and shoots growing back toward the center of the tree should also be removed. Branches that lie directly over another and shade the lower limb should be eliminated as well. Finally, branches growing at narrow angles (less than 45 degrees from the central leader) are easily broken when fruit is present, so they should also be removed. 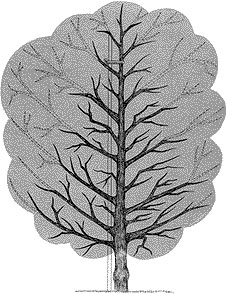 Figure 7
A mature tree that does not have a narrow pyramidal form (shaded area). Limbs are cut back to a less vigorous lateral to redevelop the vertical axis form.