Using manure to supply nutrients in a crop fertility program requires that manure be applied at the proper rate in terms of pounds of nutrients per acre. In addition, the manure must be applied uniformly across a field. Lush growth within and adjacent to spreader paths and lesser growth in areas between are the result of uneven spreading.

Manure spreader designers strive for an equal application rate, or uniformity over the entire width of a spreading swath. However, the application rate is nearly always greater in and near the spreader path than it is farther away.

The effect of this lack of uniformity can be reduced by adjusting the distance between adjacent spreader paths so that there is some overlap of the outside areas of the spreader swath (Figure 1). The additive effect in the overlap areas tends to even out the uniformity between spreader paths (Figure 2). 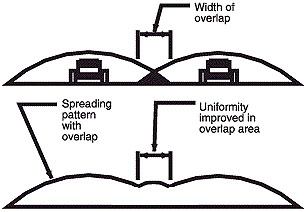 The amount of overlap, or proper distance between adjacent spreader paths, necessary for the best uniformity can be determined from a uniformity test. In this test, several plastic sheets are laid on the ground in the spreader path. The spreader passes over the sheets at normal operating speed and lane spacing. Manure collected on the sheets is weighed and compared to determine spreader uniformity.

These steps outline the procedure to determine uniformity.

If overlap is too great — lane spacing is too close — there will be more manure collected in the areas between spreader paths. Some spreaders may spread manure at a greater rate along the outside edges of the spreading swath than in or near the spreader path. In these cases, overlap will make uniformity worse, and the best uniformity is attained with no overlap — lane spacing equals spreader swath width. It may be difficult to obtain good uniformity with some spreaders.

Table 1 outlines the steps and provides a means of recording data for the spreader uniformity test.