This publication is one in a series about operating and managing a pasture-based dairy. Although these publications often refer to conditions in Missouri, many of the principles and concepts described may apply to operations throughout the United States.

When dairy farmers think about milk quality, they think of mastitis. Mastitis, inflammation of the udder, is usually caused by a bacterial intra­mammary infection (IMI). This inflammation can be subclinical or clinical. Subclinical mastitis has no obvious clinical signs and is usually revealed by an increased milk somatic cell count (SCC). Clinical mastitis can include any combination of the following signs: changes in milk secretions, such as clots, flakes, color, consistency; and swelling, heat, pain and redness, or erythema, of the affected mammary gland.

Mastitis is the most common and costly of diseases in dairy production. Several costs are associated with mastitis:

In a Wisconsin study, subclinical losses amounted to roughly 15 percent of the total cost of mastitis, loss of milk quality premiums to 40 percent, treatment costs 20 percent and culling the final 25 percent. The total loss was $257 per case. Financial losses due to subclinical and clinical mastitis tend to overlap because their impacts are not mutually exclusive; for example, subclinical cases may cause production losses and changes in milk quality that lead to premium losses, whereas clinical cases negatively impact milk production and quality and potentially increase treatment costs.

Milk quality is vital to the dairy producer, processor, retailer and consumer. Milk processors demand that milk meet certain quality parameters to supply the global marketplace. The United States maximum legal limit for bulk tank milk somatic cell count (SCC) is 750,000 cells per milliliter. However, markets outside the U.S. can have more stringent SCC requirements. The European Union, for example, requires that the SCC of bulk tank milk be no greater than 400,000 cells per milliliter, and many U.S. milk processors are thus requiring this level of quality because they export milk products to the European market.

One of the most vital steps in addressing milk quality is setting goals for your farm. Goals will vary from farm to farm and year to year. As milk quality changes, the goals will need to be revised. Improving milk quality has benefits for the physical health of the cows as well as the financial health of the dairy, so the ultimate goal should not be to simply meet the milk shipment standards, but rather to produce the highest quality milk possible. Several parameters can be used as benchmarks for monitoring milk quality. These parameters include bulk tank SCC, preliminary incubation (PI) count, and incidence of clinical mastitis. DHIA records can also be useful in monitoring udder health.

To understand how to control mastitis, you must first understand the types of bacterial pathogens that cause mastitis, their reservoirs and the clinincal characteristics of these pathogens in the cow. Mastitis pathogens are frequently classified based on their reservoir of infection as contagious or environmental. Contagious pathogens — for example Staphylococcus aureus, Streptococcus agalactiae, Corynebacterium bovis or Mycoplasma spp. — are generally harbored in the cow’s mammary gland and transmitted between cows during milking by the teat cups and milker’s hands. Environmental pathogens — for example, coliforms, non-agalactiae streptococci and some species of coagulase-negative staphylococci (CNS) — are, as the name suggests,  found in the cow’s environment and are usually acquired between milkings. Some characteristics of the primary causes of mastitis are detailed below.

Staphylococcus aureus is the most common cause of contagious mastitis and is one of the most difficult mastitis pathogen to get rid of. It is usually subclinical and can become chronic, with intermittent clinical flare-ups. The milk SCC of the affected cow will fluctuate over time. Staphyloccus aureus  can be very difficult to treat, with dry cow therapy giving the best results. However, cure rates, even with dry cow therapy, are usually low.

Streptococcus agalactiae was once relatively common but, since the introduction of dry cow therapy, has become very uncommon. It will primarily be subclinical, but it will cause persistently high SCC and bacterial counts in the milk. It is an obligate pathogen of the udder — obligate means it cannot survive outside a host — and therefore the only major reservoir for infection is other cattle.

Mycoplasma is generally considered a contagious mastitis pathogen. It is seen more commonly in large herds, especially herds that purchase cattle for replacement or expansion. It can infect multiple quarters on the same cow and can cause agalactia, or reduced milk yield. When calves are fed waste milk contaminated with Mycoplasma spp., they can develop mycoplasma infections. The usual signs of mycoplasma infections in calves are pneumonia; joint swellings, or arthritis; and ear infections, or head tilts.

Of these pathogens, the coliforms are most likely to cause severe clinical mastitis, otherwise called toxic mastitis, with signs that include swelling of the udder, watery milk, fever and systemic illness. Coliform mastitis vaccines — for example, J5, J-Vac and Endovac — have diminished the clinical severity of coliform mastitis on many farms.

Numerous types of environmental, or non-agalactiae, streptococci exist. Streptococcal mastisis can vary from an incidental finding that self-cure to strains of Streptococcus uberis that are hard to treat and can act like contagious organisms.

Coagulase-negative staphylococcus (CNS) can be environmental and, like the environmental streptococci, often self-cures. Some species of CNS cause an elevated SCC and some do not.

Clinical mastitis is easily diagnosed because the cow will have obvious symptoms of disease, which can include changes in the milk secretion, udder or cow. Subclinical mastitis is more difficult to diagnose as the cow, udder and milk have no visibly detectable abnormalities. Hence, other diagnostic tests must be applied. The most common method for detecting subclinical mastitis is to measure the milk SCC. Somatic cells are nucleated host cells and in the normal udder are primarily a white blood cell known as the macrophage. However, during infection there is a shift towards a predominant population of white blood cells called neutrophils. Somatic cells can be quantified in a number of ways, including direct microscopy, the California Mastitis Test (CMT), Wisconsin Mastitis Test, electronic counters or Porta-SCC.

Culture of milk for bacterial organisms can be done at several levels, including the bulk tank, cow and mammary quarter. When environmental mastitis is suspected, bacterial culture of bedding materials may also be warranted. When investigating a herd with a milk-quality problem, bulk tank milk cultures can help distinguish between environmental and contagious bacterial pathogens. For adequate interpretation, bulk tank milk culture data from three successive milk shipments should be evaluated. The milk hauler can take a second sample when taking the sample for bulk tank analysis for the processing plant. The samples should be frozen and then submitted for culture. Multiple samples allow for detecting intermittent shedders as well as evaluating trends in bacterial pathogen presence over time. Evaluation of the bulk tank milk culture data will help define what follow-up data are needed.

In general, if the predominant pathogens in the bulk milk are contagious — such as Staphylococcus aureus, Streptococcus agalactiae, Corynebacterium bovis or Mycoplasma spp. — individual cows will need to be cultured to determine which cows are the reservoirs. Milk samples for culture should be collected aseptically into labeled sterile tubes (Figure 2). When submitting samples for culture of mycoplasma, ensure that the lab being used does mycoplasma cultures routinely as not all labs perform this test and special media and growth conditions are required for mycoplasma culture. These data will aid in making management decisions about individual cows, such as culling, segregation, milking order and, potentially, treatment. Although a composite milk sample — that is, a sample from all four mammary quarters collected in the same tube — has value, bacterial culture of milk from individual mammary quarters is more specific and allows for making more targeted decisions, such as drying off an infected mammary quarter.

When the predominant bacterial pathogens isolated from the bulk tank are environmental — for example, coliforms or non-agalactiae streptococci — the evaluation of bedding management or paddock condition and environmental hygiene are needed. Muddy paddocks during the first 30 days post calving can be a significant problem. Collecting composite or quarter milk samples from clinical mastitis cases for bacterial culture will help define the pathogens that frequently cause clinical disease and thus lead to informed treatment decisions.

In addition to bacterial culture, some labs offer antimicrobial sensitivity testing. Unfortunately, in the case of mastitis, in vitro, or bench-top, susceptibility testing may overestimate treatment success; and in other instances, because of the delivery of high concentrations of a drug at the site of infection, organisms reported as resistant on the bench top may respond to therapy. Hence, treatment decisions should be based on historical cure rates in the herd for a given bacterial pathogen. Keeping records of clinical mastitis treatment outcomes is thus very important. Incidence of clinical mastitis should be less than 2 percent (two cases per 100 cows at risk) a month. Treatment success can be measured in two ways: resolution of clinical signs, or having two successive test day SCC results less than 200,000 cells per milliliter.

The National Mastitis Council (NMC) has a 10-step Recommended Mastitis Control Program, which is outlined below.

Regarding Step 2, the cows’ environment greatly influences their cleanliness. Hygiene scores can be a good indicator of the condition of the environment. The hygiene score most related to SCC is the udder score (Figure 3). A producer can readily score cows as they come through to be milked. The cows’ hygiene can be improved in several ways: fencing off mud holes; improving heat abatement, thereby dispersing cows; trimming tails; cleaning the cows’ freestalls more often; and minimizing overgrazing to maintain adequate grass coverage. Milking without premilking hygiene (cup on) when teats are contaminated with mud and manure is an unacceptable practice.

Regarding Step 4, the goal when milking a cow should be to prepare her for milking in such a way that milk flow is maximized and time on unit is minimized, while ensuring the teat is clean, dry and free of mastitis. Achieving this goal requires proper tactile stimulation and cleanliness before unit attachment. (See Figure 4 for proper milking procedures.) Minimize the time the unit is on the cow when milk flow is low so as to minimize teat end damage. You can get a good indication of the health of the cows’ teat ends just by looking at them. Also, aim for leaving about 1 cup, or 250 milliliters, of milk in the udder at the end of milking. Although undermilking costs producers some saleable milk, overmilking costs producers more through an increased incidence of mastitis. 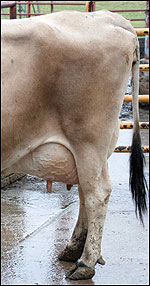 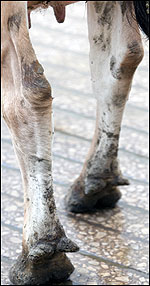 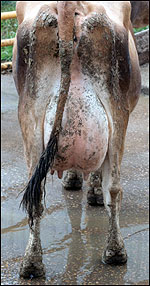 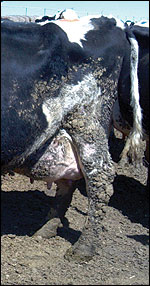 Figure 3
The National Dairy FARM Program's hygiene scorecard ranges from 1 for clean to 4 for dirty. The udder score is the hygiene score most related to milk somatic cell count (SCC).