Management of Glyphosate-Resistant Waterhemp in Corn and Soybean 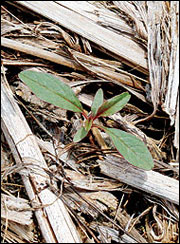 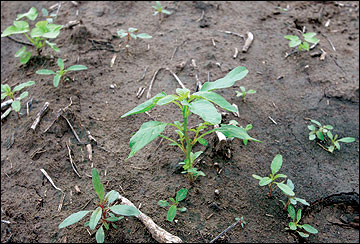 Figure 2
Waterhemp plants have hairless stems and long lance-shaped leaves that are waxy or glossy in appearance.

Waterhemp, Amaranthus rudis, is a summer annual weed in the pigweed family that is found throughout the Midwest. Waterhemp seedlings have oar-shaped or oval cotyledons (seed leaves) and are hairless (Figure 1), unlike redroot or smooth pigweed. Mature waterhemp plants have long, lance-shaped leaves that are waxy or glossy in appearance (Figure 2). Plants can range in height from 4 inches to 12 feet depending on growing conditions, and they can grow as much as 1 inch per day during the summer growing season.

In surveys conducted in Illinois and Missouri, producers and agricultural retailers listed waterhemp as one of the most common and troublesome weeds encountered in soybean production. Waterhemp is a prolific seed producer, capable of producing about one-and-a-half times more seed than most other pigweed species. Waterhemp plants generally produce about 250,000 seeds per plant, although some plants can produce as many as 1 million seeds when growing under optimal conditions in noncompetitive environments. Waterhemp seeds have a discontinuous emergence pattern and can germinate later in the season than most summer annual weed species. This allows waterhemp to escape many preemergence (PRE) herbicide applications and often allows this weed to flourish after postemergence (POST) applications of non-residual herbicides like glyphosate (sold as Roundup or a variety of other trade names). Waterhemp seed can also persist in the soil for as many as four years with 95 percent of the seed remaining viable after this time.

Waterhemp has a remarkable ability to adapt to the selection pressure imparted by herbicides and has evolved resistance to many different classes of herbicides. Waterhemp populations have evolved resistance to atrazine; to ALS-inhibiting herbicides such as Pursuit and Classic; to PPO-inhibiting herbicides such as Blazer, Cobra, Flexstar and Phoenix; and most recently to glyphosate. The first confirmation of glyphosate-resistant waterhemp occurred in Platte County, Mo., in 2005. This waterhemp biotype was 19 times more resistant to glyphosate than a susceptible biotype and was confirmed to also be resistant to ALS- and PPO-inhibiting herbicides. This phenomenon of ALS- and PPO- resistance also has been documented with waterhemp populations in Kansas, Illinois and Missouri. Since the initial confirmation of glyphosate-resistant waterhemp in Missouri, additional populations have been confirmed in Missouri, Illinois, Kansas and Minnesota. All of these populations evolved resistance to glyphosate after repeated applications of the herbicide in the same fields over time. In the Platte County location where glyphosate-resistant waterhemp was first identified, at least one application of glyphosate had been made to Roundup Ready soybeans each year for seven years.

The confirmation of glyphosate resistance in waterhemp is concerning because this weed is dioecious, meaning that male and female flowers occur on separate plants. Male flowers produce pollen, which is wind-disseminated to fertilize females, which then produce the seed. The significance of this is that pollen can transfer the resistance trait to a previously glyphosate-susceptible female waterhemp in another area. The female will then produce seed, some of which will be glyphosate-resistant.

In the majority of documented cases, glyphosate-resistant waterhemp has developed in continual Roundup Ready soybean systems where glyphosate has been used continually with little or no use of alternative herbicides. Therefore, one of the most effective and economical methods to prevent or manage glyphosate-resistant waterhemp is to rotate to corn and use alternative herbicides. In corn, a wide variety of preemergence (PRE) herbicides will provide good control of glyphosate-resistant waterhemp, including: metolachlor (Cinch, Dual II Magnum), acetochlor (Degree, Harness, Surpass, TopNotch), alachlor (MicroTech), isoxaflutole (Balance Pro, Balance Flexx), mesotrione (Callisto, also in Camix), dimethenamid (Outlook), and any of the various atrazine premixes that contain these herbicides (Bicep II Magnum, Bullet, Cinch ATZ, Degree Xtra, Fultime, Guardsman Max, Harness Xtra, Keystone, Lariat, Lexar, Lumax and others). Herbicides that provide good control as postemergence (POST) treatments in corn include: atrazine, 2, 4-D, dicamba-containing herbicides (Banvel, Celebrity Plus, Clarity, Distinct, Marksman, NorthStar, Status, Yukon), Callisto, Impact, Laudis, and Liberty or Liberty tank mixes in Liberty Link corn. When treating waterhemp POST, it is very important to ensure that herbicides are applied to the correct stage of the crop and the weed based on label recommendations of the herbicide.

Figure 4
Influence of herbicide programs on net income when glyphosate-, ALS- and PPO-resistant waterhemp is present in soybeans. (*fb=followed by; PRE=preemergence; POST=postemergence)