Some insects, such as honeybees and butterflies, are considered beneficial because of the important role they play in plant pollination. The insects described in this guide are considered beneficial because they feed on other insects (Table 1). They are either predators or parasites. Predators actively hunt and feed on other insects. Many predatory beneficial insects are generalists that feed on many types of prey. The parasites are usually flying wasps or flies that lay their eggs on or in the body of certain kinds of insects. The young feed on and often destroy their hosts.

Noninsect predators are also beneficial in row crops and gardens. Examples include spiders and predatory mites, which are also described in this guide. Collectively, pollinating insects, predatory and parasitic insects, and noninsect predators that help control pests are commonly referred to simply as "beneficials."

Insects are always active in the garden, and the vast majority can be classified as beneficial.
Less than 5 percent of all insects are pests.

Beetles are the largest and most diverse group of insects. They go through four stages of development: egg, larva, pupa and adult. Both the adult and larval stages can be predacious. Adult beetles have two pairs of wings: a pair of forewings that are colored and leathery, and a pair of membranous hind wings that are folded beneath.

Ground beetles
Adult ground beetles have black or dark metallic coloring (Figure 1). Most adult beetles are nocturnal; they prowl the soil and its surface at night in search of food. Ground beetles feed on soil-dwelling and aboveground pests. The larvae are brown or black and have a wormlike shape, but they are rarely seen because they remain underground. 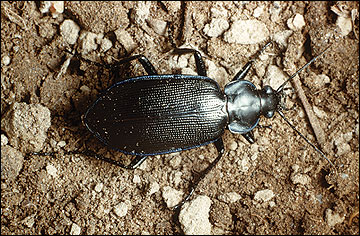 Lady beetles or ladybugs
There are many different species of lady beetles, but most are typically round or oval shaped with bold patterns and bright colors with spots (Figure 2). Lady beetle larvae have an elongated, dark-colored body with orange and yellow markings (Figure 3). Adult and larval lady beetles feed on aphids; mealybugs; soft-bodied insects, such as caterpillars; and spider mites. 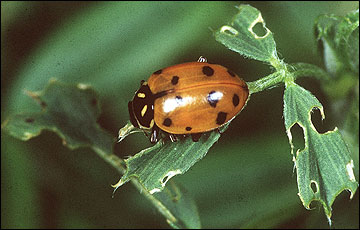 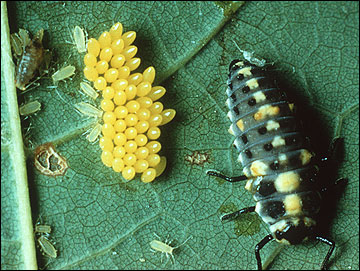 Rove beetles
Adult rove beetles are black or brown and have elongated bodies with short wings that leave most of their abdomen uncovered (Figure 4). These beetles resemble earwigs, but they are smaller and have no pincers. Rove beetles feed on aphids, mites, fly eggs, maggots, nematodes and springtails. They are also beneficial in decomposition and are often found around compost piles, manure, mulches and perennial beds. 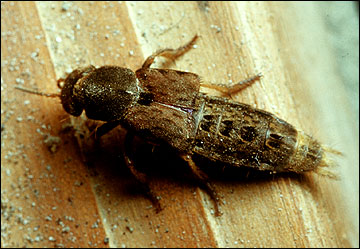 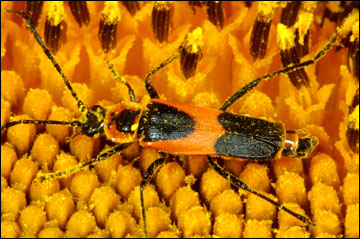 True bugs have mouthparts adapted for sucking plant, insect or other fluids. True bugs kill prey by piercing them and extracting their body fluids. Adults have forewings with membranous tips that overlap when the bugs are at rest. Bugs start out as wingless nymphs and molt several times as they increase in size until they are winged adults. They do not have distinct larval and pupal stages as do beetles.

Minute pirate bugs or flower bugs
Adult pirate bugs or flower bugs are very small and have a triangular head and a long, oval-shaped body (Figure 6). They are black or purplish and have white wing patches. Nymphs are yellow or reddish-brown and pear-shaped. They feed on small caterpillars, leafhopper nymphs, spider mites, thrips, aphids and the eggs of many other insects. 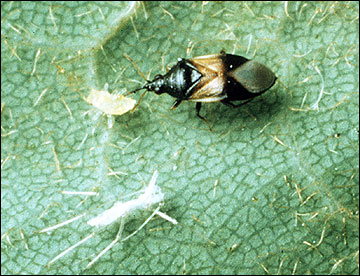 Bigeyed bugs
Bigeyed bugs are long, oval and somewhat flat, and range in color from black and white to tan (Figure 7). Like the name implies, these bugs have prominent bulging eyes and a wider head than other bugs. They feed on aphids, caterpillars, leafhoppers, spider mites and tarnished plant bugs. 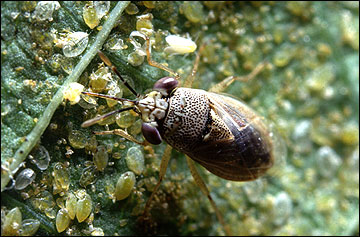 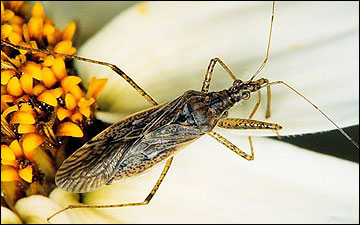 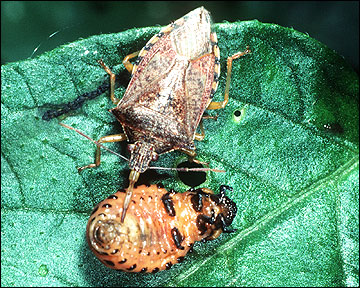 Ambush bugs
Ambush bugs have a stout body and thickened, mantid-like front legs (Figure 10). Their coloring ranges from black to brown to yellow to green. They prey on bees, flies and wasps. 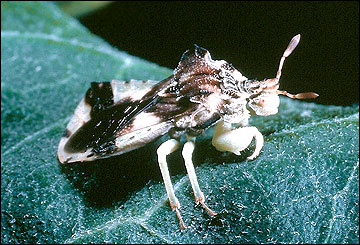 Assassin bugs
Adult assassin bugs are black, red or brown and have a long narrow head with round beady eyes. They are relatively large insects with a long pair of front legs. Some species of assassin bugs can inflict a painful bite if mishandled. Assassin bugs prey on aphids, leafhoppers, small caterpillars, flies, and beetle eggs and larvae. One of the most common assassin bugs in Missouri is the wheel bug (Figure 11). 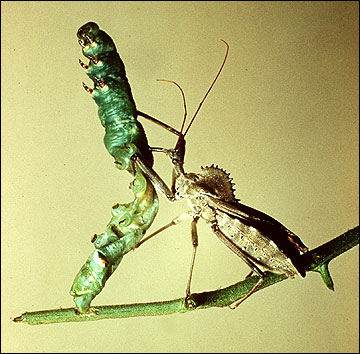 Flies go through four stages of development: egg, larva, pupa and adult. Fly larvae, which are called maggots, have no legs. Adults are highly mobile fliers with only one pair of wings. The various species of predatory flies can have chewing, piercing, sucking or sponging mouthparts, depending on their food source.

Robber flies
Adult robber flies have a well-developed thorax with long legs and a tapered, slender abdomen. These grayish flies are strong fliers with large eyes. Because the larvae are soil dwellers, they consume eggs, small larvae and other soft-bodied insects that also live in the soil. Adults prey on butterflies, wasps, bees, grasshoppers, leafhoppers, beetles and other flies (Figure 12). 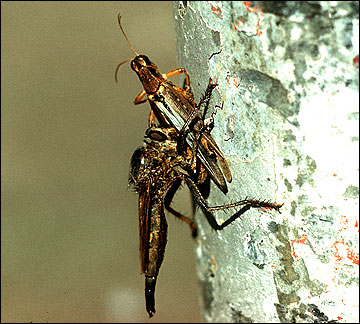 Syrphid flies
Syrphid flies are also known as flower flies or hover flies. These brightly colored flies are black with yellow or orange markings, resembling bees and yellowjackets (Figure 13). The larvae feed on aphids (Figure 14). Adults feed on pollen and nectar and are important pollinators. 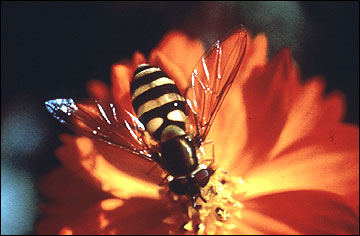 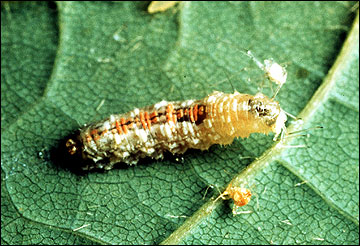 Parasitic flies have sponging, sucking or piercing mouthparts. Although they have only one pair of wings, they are good fliers and can travel great distances. Parasitic flies are aggressive predators that feed on a variety of insects, especially those that are exposed, such as caterpillars and leaf-eating beetle larvae.

Tachinid flies
Tachinid flies are about the size of a housefly. They are gray or brown and are covered with dark bristles (Figure 15). Adult tachinid flies lay eggs on caterpillars, beetles and bugs near their heads. Young maggots tunnel into a host and feed for a week or more. Eventually, the fly larvae will kill the host. Tachinid flies also feed on many species of caterpillars, Japanese beetles, May beetles, sawflies and squash bugs. 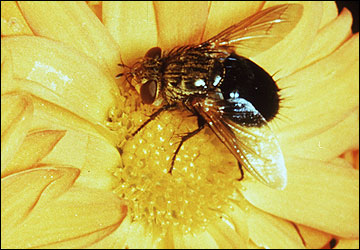 Predatory wasps have chewing mouthparts with which they feed on a variety of prey. Adult wasps capture prey for their larvae. Many native predatory wasps do not attack people and are generally considered to be beneficial.

Hornets, paper wasps and yellowjackets
Adult hornets, paper wasps and yellowjackets are black with yellow or white markings (Figure 16). Adults feed on caterpillars. Larvae feed on beetles, flies, true bugs and other wasps. In cold winter areas, colonies only exist for one season. The colony starts new every year from a queen that has overwintered. 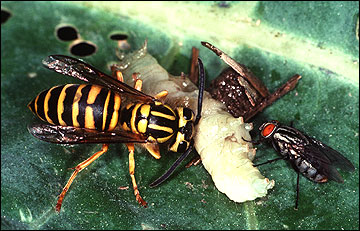 Parasitic wasps are small with metallic brown or black coloring. Females have an extension on the tip of their abdomen called an ovipositor, which is used to sting and lay eggs in or on the host insect (Figure 17). When the eggs hatch, the larvae feed on the host, in time crippling or killing the larger insect. Wasps go through four stages of development: egg, larva, pupa and adult. Parasitic wasps can overwinter as either a larva or pupa within their hosts or in the soil. The adults emerge in spring or summer. 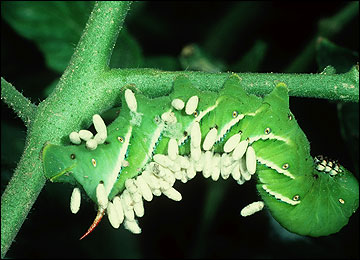 Figure 17
Cocoons of a parasitic wasp on a tomato hornworm. 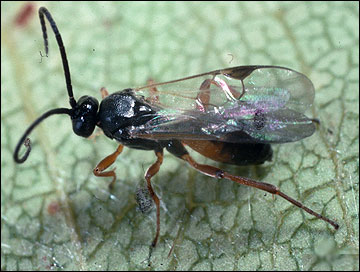 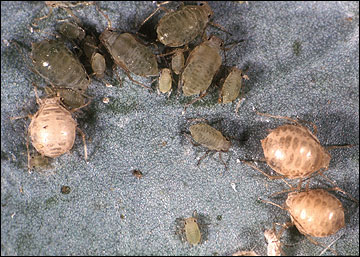 Trichogramma wasps
Trichogramma wasps are yellow, or yellow and black (Figure 20). A female wasp will lay one or more eggs in the egg of the host insect. The host egg turns black as the Trichogramma wasp within it develops. These wasps attack the eggs of caterpillar pests, including European corn borers, corn earworms, imported cabbageworms, diamondback moths, cabbage loopers, and tomato and tobacco hornworms. 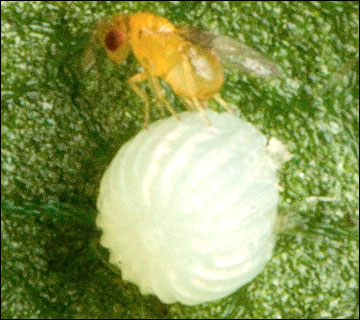 Lacewings
Adult lacewings are soft-bodied insects. They have four membranous wings distinctively marked by veins with many branches, and chewing mouthparts. Female lacewings lay their eggs on the end of slender white stalks (Figure 21). The larvae that emerge are small, flattened, voracious predators with prominent jaws (Figure 22). Adults of some species are predacious, whereas others feed only on pollen and nectar. 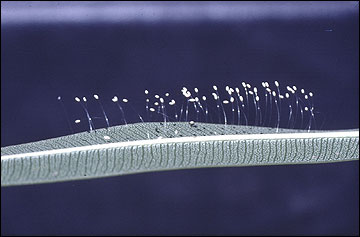 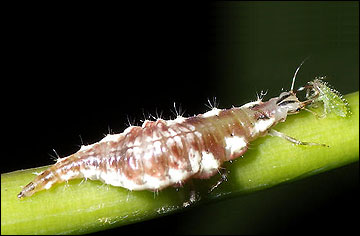 Green lacewings
Adult green lacewings are pale green and have large, many-branched veined wings they hold over their body when at rest (Figure 23). Green lacewing larvae are similar to lady beetle larvae but are light brown and have hooked jaws projecting from the front of their heads. The larvae feed on small caterpillars, beetles, aphids and other insects. The adults feed primarily on nectar and other fluids, but some consume small insects. 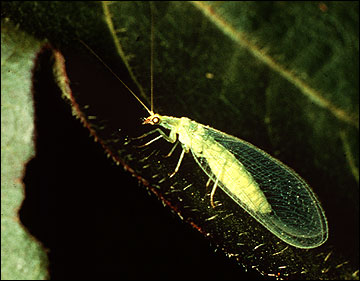 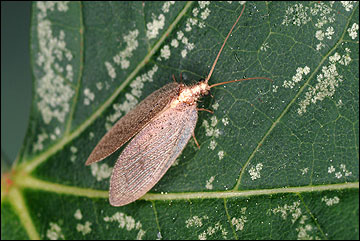 Mantids
Mantids are also known as praying mantids. Mature adults are yellow, green or brown (Figure 25). Mantids usually feed on many kinds of insects, including beneficial species. They wait on flowers to prey on insects that feed on nectar and pollen, such as moths and mosquitoes. 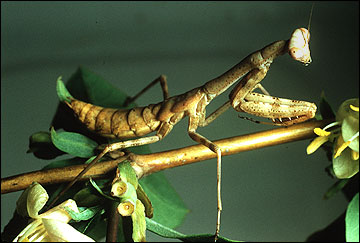 Earwigs
Earwigs are decomposers and predators (Figure 26). As decomposers, they feed on dead plant material, which helps recycle organic matter. As predators, they feed on pest species. For example, the European earwig feeds on the apple and woolly apple aphids in many orchards. However, earwigs can be pests by feeding on the seedlings, blossoms or shoots of many soft fruit trees, such as apricots, cherries and peaches. 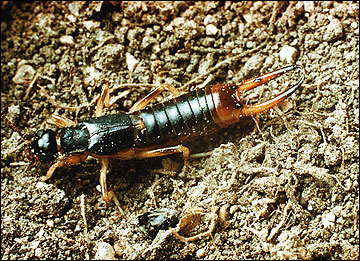 Predatory mites
Predatory mites are round and are larger and faster moving than the spider mites on which they prey (Figure 27). They do not like humid weather but instead prefer hot, dry weather. These mites feed not only on the plant-eating spider mites, but also on immature thrips. 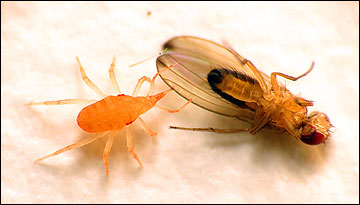 Spiders
Spiders feed on insects and other small arthropods. Some spiders build webs on which prey become entangled (Figure 28). Webless spiders feed on prey they find on soil and plants (Figure 29). 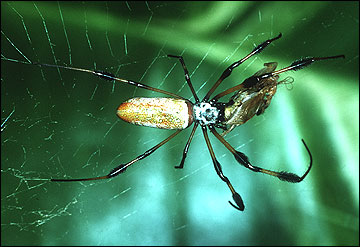 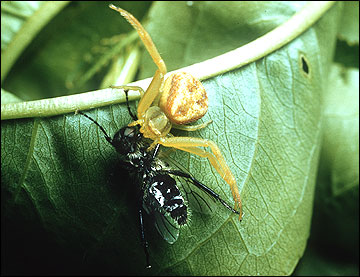