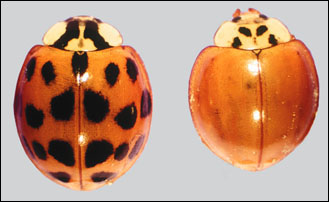 Figure 1
The multicolored Asian lady beetle can have as many as 19 spots, or it can have no spots.

Throughout much of the country, the multicolored Asian lady beetle (Harmonia axyridis) has become an unwanted houseguest, especially during the spring and fall months. Adults are about one-quarter inch long, oval in shape and about two-thirds as wide as they are long. The color of the wing covers (the domelike shell over most of the body) can range from beige to yellow to yellowish orange to bright reddish orange with anywhere from 0 to 19 black spots (Figure 1). The area just behind the head and in front of the wing covers is white with a black, M-shaped mark.

In the late 1970s, this species of lady beetle was introduced into many agricultural areas throughout the United States and Canada because of its great value as a biological control agent. It was first found in Missouri in 1993. During the growing season, the Asian lady beetle is a very beneficial insect because both the larval and adult stages feed on aphids, mealybugs, scale and other soft-bodied insects infesting many important crops and plants. Healthy adults can live up to three years.

Why are they in houses?

During October and November, the adult beetles seek out protective sites and congregate at these locations to overwinter (hibernate) in clusters. In their native home (Japan, Korea and other parts of Asia), these beetles are attracted to vertical surfaces and usually overwinter in cliffs. Unfortunately, the vertical symmetry of houses and other buildings appears to attract the beetles as suitable overwintering areas, and they often congregate on a home's outside walls, windows, doors or porch decks that are light-colored and have a south or southwest exposure.

The beetles will enter buildings through poorly fitting window screens and doors, cracks and crevices, and vents. They tend to congregate in dark, undisturbed areas such as attics and wall voids. In March and April when temperatures become warmer and the days are longer, the beetles will try to move outside in search of food. It is at this time when they are becoming active that the greatest numbers of them will be seen inside homes.

The beetles become a serious nuisance when large numbers of them are seen crawling on the walls and ceilings inside a home. They do not sting, carry human diseases, or bite (although in rare cases some folks claim to have felt a very light "bite or nibble" by them). In some instances where there are large numbers of beetles inside the home, there have been a few reports by individuals of an increase in respiratory or allergy-like reactions. Asian lady beetles are not known to feed on wood, clothing or human food, and they do not reproduce indoors during the winter months.

It should be noted that when these beetles are handled, such as picking them off the walls or furniture or if they are squashed, they sometimes release a chemical substance that, although harmless, does have a mildly offensive odor and can stain walls and fabrics. The use of a vacuum cleaner in collecting the beetles will help avoid such problems.

The best way to check home invasion by Asian lady beetles in the fall is to prevent their entry into the structure. This can be done by sealing all outside cracks and crevices around doors, windows, siding, utility pipes and other openings with a good quality silicone or silicone-latex caulk. Window screens should not have any tears and should fit snugly inside the window frame. Install insect screening over attic and exhaust vents.

Inside the home, the beetles can be easily vacuumed or swept up in a dustpan and released outside, preferably in a sheltered spot well away from the house. If vacuuming alone is not practical, then a household aerosol spray containing pyrethrins or pyrethroids (e.g., tetramethrin, resmethrin) may be used.

If you do vacuum up large numbers of beetles, empty the bag relatively soon afterward. The beetles will die within a day or so and, if not removed, may impart a permanent odor that will be noticeable each time the vacuum cleaner is started for several weeks or months after that.

Although Asian lady beetles are harmless and very beneficial because they feed on many soft-bodied insects that attack important horticultural and agronomic plants, large congregations of the beetles located outdoors near homes may need to be controlled with chemicals. For such outdoor control, apply insecticides containing carbaryl (e.g., Sevin) or chlorpyrifos (e.g., Dursban).