Caterpillars in Your Yard and Garden - Page 8 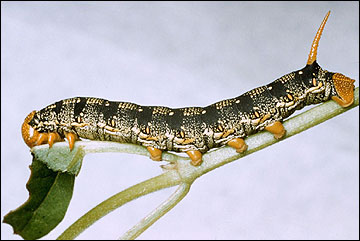 The light form, left, and the dark form, below, of catalpa sphinx caterpillars (Ceratomia catalpae), are present from early summer to early fall. They produce multiple generations per year. 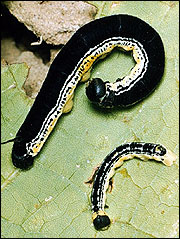 There are two variable color forms, dark and light, of the catalpa sphinx caterpillars. Caterpillars with the dark form have a solid, broad, black stripe on the top of the body with yellow and white markings on the side of the body. The head and horn are also black. Light-formed individuals are pale yellow in color with patches of black on the top of the body, and the head and horn are yellow-orange. Full-grown caterpillars are about 3 inches long. The only host plant is the catalpa tree, and caterpillar numbers may reach such levels as to cause severe defoliation.

Many caterpillar species in the Sphingidae family are referred to as hornworms because they have a conspicuous horn or spine on the top of the last abdominal segment. The bodies of these caterpillars are usually free of hairlike setae and smooth except for shallow wrinkles in each segment. Adults are referred to as sphinx, hawk or hummingbird moths. They are fast, strong fliers with a rapid wing beat and often hover in front of a flower to feed on the nectar in much the same manner as a hummingbird (and superficially they look like a hummingbird too!). The name sphinx is probably in reference to the sphinx-like position that some of the caterpillars assume when disturbed. Some common vegetable, tobacco and other plant pests belong to this family of caterpillars.