Caterpillars in Your Yard and Garden - Page 37 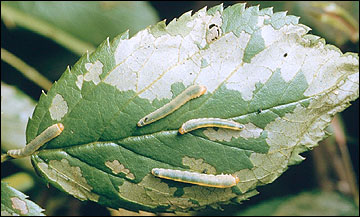 Full-grown caterpillars are about 0.5 inch long. The head is yellow-orange and the body yellow-green. The caterpillars skeletonize the foliage by feeding on the upper layers of the leaf, leaving behind the lower epidermal layer. Host plants are only Rosa species.

Most species in the order Hymenoptera are beneficial to agriculture as either important pollinators or as biological control agents that prey upon pestiferous insects. However, the hymenopteran group known as "sawflies" feed upon plant tissue and at times can cause serious defoliation. While adult sawflies resemble a wasp or a bee, immature sawflies are caterpillar-like, resembling the immature stage of moths or butterflies. A good diagnostic characteristic that can be used to distinguish between lepidopteran and hymenopteran "caterpillars" is the number of prolegs on the abdomen. Moth and butterfly caterpillars usually have five pairs of prolegs, four pairs on the mid-abdomen and one pair at the end of the abdomen (referred to as anal prolegs). In contrast, sawfly caterpillars typically have six or more pairs of prolegs on the abdomen. Sawfly larvae can cause significant damage to many forest trees (conifer and broadleaf) and landscape trees and shrubs.