Caterpillars in Your Yard and Garden - Page 25 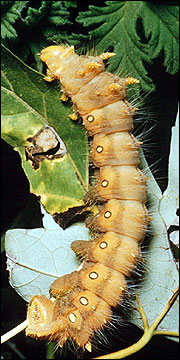 The body color of imperial moth varies from light green to dark green to reddish brown. Full-grown larvae reach lengths of 4 inches. The head is usually yellow-orange. Four short horns are found on the second and third thoracic segments and on the last two abdominal segments. The rest of the body is sparsely covered with long, white hairs. The round-oval spiracles on the sides of each abdominal segment are conspicuous. They are white-yellow outlined in black.