"Green industries" are the nonfood segment of agriculture dedicated to the production of, as well as the maintenance and sale of, ornamental, landscape, turf and nursery plant materials for the enhancement of the human environment. Green industries also include businesses, organizations, individuals and associated properties in the horticulture industry such as ornamental nurseries, sod farms, landscapers, floriculturists, arborists and lawn care firms.

Missouri's green industries can be divided into three segments: producers, service providers and end-users. Producers and service providers include businesses that primarily serve the end-user segment through production and sales of turf and ornamental plant material, as well as the contractual services involved in the installation and maintenance associated with these products. End-users are the final segment of green industry products and services and typically include golf courses, park districts, airports, commercial areas, schools and homeowners, all of which often employ their own workforce for landscaping and maintenance services.

Green industries are among the fastest growing of Missouri's agricultural sectors. They include nearly 1.5 million acres of maintained turfgrass areas, with estimated annual expenditures of $1.3 billion for establishment and maintenance of lawns, sports turf and athletic fields by homeowners, sod producers, golf courses, school districts, colleges and universities, lawn care firms, municipal and county governments and the Missouri Department of Transportation. Surveys show that these same groups spend more than $20 million annually on landscaping plants and materials.

Integrated pest management (IPM) can be thought of as a systematic approach to solving pest problems by applying knowledge about pests to prevent them from reaching unacceptable levels. IPM includes a variety of cultural, biological, genetic, regulatory, physical and chemical tactics to reduce pest problems. Maintaining high quality plant material involves carefully and routinely observing plants and looking for early signs of infestation or problems with plant material. Correctly diagnosing a pest problem is a key component to a successful IPM plant management program.

Beginning in 1972, the U.S. Department of Agriculture made funding available to the states to develop an IPM network through the extension system. MU's IPM program has been in place since the mid-1970s. Although IPM programs originally focused mainly on insects and their control, today's programs consider all categories of pests.

Missouri's geographic location and environment are conducive to the development of pests. Many sites planted with turfgrass are sprayed with pesticides, especially herbicides. Reliance on pesticides alone for pest control results in pesticide resistance, greater potential for human and pet exposure, potential environmental contamination and harm to nontarget organisms, and pesticide waste. IPM stresses routine inspection and monitoring and the use of correct cultural practices. IPM recommends treatment with pesticides only when pests are above economic thresholds, not routine applications based on calendar date whether pests are present or not. When pesticides are necessary, IPM seeks to use natural or biological substances or those that are the least toxic and most environmentally friendly.

The importance of IPM

In the green industries, particularly within urban areas, social and environmental considerations are at the forefront. As in other states, Missouri's citizens are concerned about pesticide and nutrient pollution of surface water and groundwater sources, effects on human health and impacts on nontarget organisms and food safety. A degraded environment with poor water and air quality is not a conducive atmosphere for healthy life. IPM strives to safeguard these resources, and this approach will have definite benefits to society in general.

Four national objectives have been identified for the IPM program:

MU's IPM program has specific objectives related to the interests of the green industries:

Putting a successful IPM program into action in the green industries involves the following five steps:

1. Identify key pests and the damage they cause

Proper identification of the pest is important for several reasons. It may not be an economically detrimental pest after all, and no control measures will be necessary. Not all insects are pests; some are natural predators or parasites that help to control pest species. The proper selection of a control measure or pesticide depends on the correct identification of the pest and in some cases its life stage.

Rather than calendar-based treatments, IPM stresses scouting practices to detect pests and determine if action is necessary. Time constraints and the lack of trained, competent personnel challenge green industry managers trying to implement a sound scouting program. If damage can be detected before a serious pest population becomes established, then several problems can be prevented. Environmentally friendly control measures, such as watering, handpicking or applying soaps and oils, may be employed. Before pesticides are applied, scouting may show that lower than maximum registered rates can be applied to achieve acceptable levels of control. Several practical considerations can save time in a scouting program. Knowing a pest's habitat can save time in the monitoring program. For example, weeds are most likely to invade thin and stressed areas of turfgrass. Such areas can be watched more frequently and closely. The anticipated time of pest development can alert a pest manager to the most opportune times for scouting. Degree-day modeling is based on the number of days when average temperatures exceed the threshold for development and activity of a particular pest. By tracking degree-days, pest managers can predict when the pest will appear and damage will occur. In greenhouse settings, it is common to monitor ubiquitous insect pests such as thrips and whiteflies using sticky traps and cards. Other landscape tree pests, including lilac, ash and dogwood borers, can be monitored with pheromone-baited wing traps.

3. Determine the potential for economic loss or significant reduction of aesthetic value

In the original IPM models that were developed in agricultural environments, control measures were based on economic thresholds. To justify treatment, pest populations or pest damage had to exceed this threshold. In the green industry, there may be two different types of thresholds to take into consideration when making pest control decisions. Injury threshold refers to the level of damage a plant can tolerate. The amount of damage that a manager can tolerate is referred to as the aesthetic threshold. Injury thresholds tend to be more precise because the level of damage associated with a specific pest density is known. For example, grubs do not always cause damage to turfgrass. Most areas can sustain up to six May/June beetle grubs, 10 southern masked chafer grubs or 25 ataenius grubs per square foot without significant damage. Because aesthetic value is often of primary concern in turfgrass sites, individual tolerance levels are variable. Turfgrass managers may be willing to tolerate different levels of pests in different situations and make site-specific management decisions. A pest acceptance level can be extremely low in highly visible or high-use sites. For example, few weeds would be tolerated on a golf green or a lawn that is adjacent to a commercial building.

If there are health and safety threats or legal concerns associated with a certain pest, then thresholds are more clearly defined. Missouri's law prohibiting noxious weeds significantly affects the decision-making process of the Missouri Department of Transportation. In some instances, pest acceptance levels may be greater because of social or cultural factors or because of concerns about the costs or hazards of pest management methods used.

A variety of integrated pest management tactics are available to the green industries:

The success of an integrated pest management program depends on evaluation of its results. What worked well, which aspects need improvement, and which should be eliminated? What are the benefits of the program in financial return and in environmental or social value?

Pest problems on the horizon for Missouri's green industries 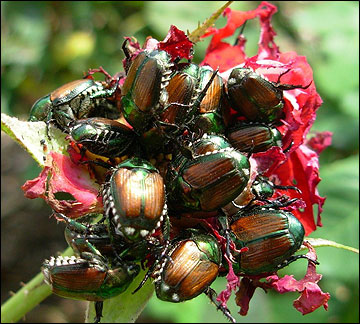 Figure 1
Adult Japanese beetles can cause extensive defoliation of trees and shrubs.

The Japanese beetle was first found in the United States in 1916, following accidental introduction from its native country of Japan. It is now common to the eastern United States and for the past 70 years has been in pockets of Missouri, such as Springfield, Sedalia and western Missouri. These pockets have been expanding over the last few years and populations have been increasing.

Japanese beetles are half an inch long and metallic green in color with bronze or copper-colored wing covers. They can be confused with the green June beetle but are smaller. Japanese beetle adults often congregate in large numbers to feed on foliage and fruit of 300 to 400 different hosts, including fruit and ornamental trees and shrubs, as well as agricultural plants such as corn and soybean plants (Figure 1). Typical feeding damage by the beetles is often seen as a lace-like pattern on the foliage of host plants as beetles avoid leaf veins when feeding. Beetles often begin feeding at the top of plants and move downward.

Adult beetles emerge from the soil in May and June to feed for about 60 days. During this time the beetles mate and females deposit eggs in the soil. Each female may lay 40 to 60 eggs, and larvae emerge in about two weeks. Larvae will feed on plant roots and decaying material before overwintering in the soil as third instars. The following spring, larvae quickly finish development, pupate and emerge as adult beetles beginning in May.

Emerald ash borer is an aggressive wood-boring insect that attacks and kills all species of ash (Fraxinus) trees. Attacks by this metallic-colored beetle of the Buprestidae family usually kill ash trees in one to three years. Although stressed trees are usually more prone to borer attack than healthy trees, evidence from Michigan suggests that even healthy well-maintained ash trees are being attacked and killed by this beetle.

The natural range of the emerald ash borer is eastern Russia, northern China, Japan and Korea. It was first discovered in North America in Michigan in June 2002. The borer most likely traveled from Asia to North America in wooden packing materials. Because adult insects only move short distances on their own, the continuing spread of this beetle is primarily by human transport of ash wood products.

Although the emerald ash borer has not yet been found in Missouri, it has been in isolated infestations in the neighboring state of Illinois. In addition, there are currently 21 counties under quarantine in Michigan and isolated infestations in Ohio, Indiana and Maryland as well as Ontario, Canada. For current national information on emerald ash borer online, see emeraldashborer.info.

The gypsy moth is an exotic and destructive pest that threatens the health of Missouri's forests and urban landscapes. Each gypsy moth caterpillar can consume up to 11 square feet of hardwood foliage from May until June. When abundant, caterpillars can completely defoliate trees. They are also a public nuisance in recreational and residential areas because of the rain of their excrement from treetops.

Gypsy moths are slowly expanding their range toward Missouri, spreading by wind and by people unknowingly carrying moths on vehicles, nursery stock or other outdoor items. Although there are no infestations currently in Missouri, an annual multiagency effort to detect introductions from other infested regions is conducted by using pheromone lure in sticky traps. If actively reproducing gypsy moth populations are detected, programs using IPM techniques will be employed to stop their spread.