Two species of weasels occur in Missouri. Long-tailed weasels (Mustela frenata) are found throughout Missouri but are seldom seen. The smaller least weasel (Mustela nivalis) is found only in northern areas of the state (Figure 1). The upper parts of these animals are yellowish to dark brown; under parts, white with a yellow tint. In winter, the coat of weasels in northern portions of the state is usually white except for a black tip on the tail. The fur is known as ermine. Weasels are in the family Mustelidae, which also includes mink, skunks, badgers and river otters. Mink (Mustela vison) occur statewide but are a semi-aquatic species mainly found in wetlands. Although weasels and mink seldom cause damage, both species may kill poultry or other domestic fowl. Missouri allows trapping during a designated season.

Weasels live in many habitats but prefer woodlands, brushy fence rows and thickets along watercourses. They live in shallow burrows made by moles or woodchucks, in rock piles, under tree roots and in dense, brushy vegetation. They eat small animals and dead prey they store in their burrows. They prefer rodents such as mice, rats and voles but also eat squirrels, chipmunks, shrews, moles, rabbits, small birds, bird eggs, reptiles, amphibians, earthworms and some insects. Despite their small size, weasels are voracious predators.

They mate in July or August, and young are born the following April or May. Gestation averages 279 days, but the fertilized embryos are dormant a long time before implantation and further development. A single litter usually consists of four to eight young. Weaning begins about 5 weeks of age. Young males do not mate their first summer. Females become sexually mature when they are 3 to 4 months old. 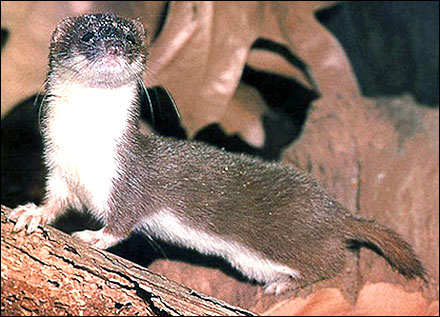 The Wildlife Code of Missouri, part of the Code of State Regulations, classifies the long-tailed weasel and mink as furbearers and game mammals that may be trapped during the prescribed season. Damage-causing weasels may be shot or trapped out of season without a permit. Refer to 3 CSR 10-4.130 Owner May Protect Property; Public Safety of the Code for details and restrictions (see Resources).

Weasels are attracted to brushy protective cover and areas with ample food sources such as mice and rats. Take steps to remove these types of habitat around farm buildings and other structures. Remove food sources by controlling rats, mice and voles.

To keep long-tailed weasels and mink out of poultry houses and other structures, close all openings larger than 1 inch in diameter. Block openings with half-inch hardware cloth, wire mesh or other suitable materials that prevent animals from entering to look for food.

These products are not recommended or effective control methods. The naphthalene in moth balls, for instance, is toxic, and the vapor can be harmful.

Trapping is the most effective way to control and remove nuisance animals. Weasels have a curious nature and are easily trapped in number 0 or number 1 steel traps. Use foothold and body gripping traps; cage traps are less effective. Set traps in old brush piles, under outbuildings, next to poultry houses, under fences or along stone walls since weasels will likely investigate any small covered area. Protect trap sets with objects such as boards or tree limbs to prevent harming other wildlife. Bait single- or double-door cage traps with fresh meat or fish, and place in areas where damage is occurring. Place double-door cage traps in runways and wire the doors open for a few days before setting the trap. Check current regulations for trapping program restrictions that may apply.

Weasels seldom cause severe economic losses to poultry or domestic fowl; however, when they do locate an easy food source, steps can be taken to solve the problem. Weasels also can be beneficial predators as they consume rats, mice and other small rodent species. Contact the Missouri Department of Conservation and refer to the Wildlife Code of Missouri before using traps or other damage control techniques for weasels.