The eastern chipmunk (Tamias striatus) is a ground-dwelling rodent common across Missouri, particularly in the Ozark region (Figure 1). Chipmunks have distinctive stripes on their rusty red to chestnut brown fur. Five dark brown stripes line the back — one down the backbone from the neck to rump, two on each side from shoulder to rump. A creamy buff stripe separates the dark stripes. Mature chipmunks are 9 to 10 inches long and weigh about 3 ounces. The flattened, bushy tail is about one-third the animal's length. They sit upright and hold food in their forefeet while eating. Their heads are blunt and squirrel-like, and they carry food and other material in furred cheek pouches. 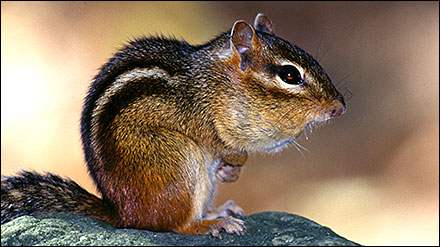 Chipmunks may range over an acre, but their individual territories often are much smaller. Two to four animals may inhabit an area the size of an acre; however, their population is dependent upon the availability of food and cover.

They are omnivorous, feeding on plants and animals. Acorns, hickory nuts, cherry seeds, serviceberries, raspberries, mushrooms, dogwood seeds, corn and plant bulbs are favorites. They will also eat birds' eggs, insects, snails and occasionally mice and young birds. Chipmunks cache food in their burrows to use throughout the year. They are prey for predators such as foxes, coyotes, hawks and owls.

Mating occurs during the spring and again in summer or early fall. Litters consist of two to five young born after a 31-day gestation period. The young become sexually mature within the first year; adults can live up to three years. They are typically most active during early morning or late afternoon. During winter, they hibernate.

Chipmunks are found in mature woodland habitat and adjacent edges. They also live in suburban and urban areas and can be found in gardens and areas with shrubs and ornamental plants, rock piles and outbuildings or under patios and foundations. They can be a nuisance when they dig seeds from gardens, feed on flower bulbs or burrow in lawns or under foundations. Their 2- to 3-inch diameter burrows descend almost vertically. They are cut neatly through the turf, leaving no excavated soil at the entrance. The main tunnel can be 20 to 30 feet long, but a more complex burrow system can occur when cover is sparse. The burrow system usually includes a nesting chamber, food storage chambers and various side pockets that connect to the main tunnel. Separate tunnels are used for escape if the chipmunks sense danger.

Chipmunks seldom cause economic damage, but there may be circumstances when prevention and control measures need to be considered. Chipmunks tunneling or burrowing under home or building foundations can cause problems. Also, chipmunks may eat garden seeds and flower bulbs, gnaw on seedlings or eat pet food that is not stored in a protected container.

Homes with wooded lots, thickets of ornamental shrubbery and dry rock walls are attractive to chipmunks. Altering the pattern of natural and ornamental plants can make this habitat less attractive. Because most people value their trees and shrubs too much to make drastic changes to their landscape, they may simply opt to tolerate chipmunks.

To keep chipmunks out of buildings and other structures, use hardware cloth, caulk or other materials to close entrances and openings in the foundation or other points of entry. Hardware cloth can also be used to exclude chipmunks from flower beds. Cover seeds and bulbs with one-quarter-inch hardware cloth, and cover the cloth with soil. The cloth should extend at least 1 foot past each margin of the planting. In the long run, exclusion is less expensive than trapping, particularly when there are many chipmunks in an area.

Although chipmunks are a protected wildlife species under the Wildlife Code of Missouri, they can be controlled when causing damage. Trapping is the most practical way to remove nuisance chipmunks. Live-catch, wire-mesh traps or common rat snap traps can be used. Effective baits include nut meats, sunflower seeds, raisins or grains that are used in common breakfast cereals. It is often a good idea to prebait the trap for a couple of days by wiring the trap doors open. The chipmunks will come to associate the trap with a new source of food. Once they become conditioned and are feeding on the bait, the trap can be set. Be sure to place the trap securely so it doesn't move when the animal enters. Check traps on a daily basis. Release the trapped chipmunks at least a mile from the capture area.

Rat-sized snap traps are also effective, but they kill the animal. These traps are larger than those used to trap house mice. The same baits used for live-trapping can be used, but they should be secured to the bottom of the trigger. Peanut butter and oats smeared on the trigger can be effective bait. To attract chipmunks, place small amounts of bait around the trap.

Place either type of trap where chipmunks travel or feed. Place them perpendicular to the chipmunk's travel route or in pairs with the trigger for each trap facing away from the other. For more information on using traps to control small rodents, refer to MU Extension publication G9446, Controlling Rats.

No commercially available toxic baits or pesticides specifically control nuisance chipmunks. Baits for controlling house mice or rats will also kill chipmunks; however, they are not labeled for such use and are not recommended.

Contact the Missouri Department of Conservation or MU Extension for more information on preventing and controlling nuisance chipmunks.