This aquaculture and fisheries guide is one in a series being developed jointly by MU Extension and Lincoln University.

Many Missouri ponds are watershed ponds that rely on surface runoff to maintain proper water levels (Figure 1). Continued drought combined with high temperatures can have devastating effects on fish ponds. Drought conditions tend to reveal poor pond construction and magnify the potential for a fish kill. Even ponds that have been properly designed and constructed within a watershed can have problems.

Ponds that typically are the first to have problems are those in very small watersheds or on marginal soils. A small watershed is one where the area surrounding the pond is too small to provide enough runoff to maintain the pond's water level during years with average rainfall. In Missouri, the recommended watershed-to-pond acreage ratio is between 15-to-1 and 20-to-1, which means a watershed must be at least 15 acres to provide runoff for a 1-acre pond.

As pond levels decrease through seepage, evaporation and lack of runoff, several problems can occur:

Figure 1. During a drought, water levels drop in watershed ponds, crowding fish and increasing the potential for aquatic vegetation and oxygen depletion problems.

During drought, pond water levels will continue to drop, exposing the shoreline and further reducing pond volume. The combination of these events causes fish crowding and stress, and increased aquatic plant growth. Aquatic plants begin growth near the shoreline in shallow water that is less than 3 feet deep. Properly constructed ponds will have deeper shoreline areas. However, drought conditions will create shallow areas that expose plants to more sunlight and encourage their rapid growth. Plants grow quickly in warm water, so develop an aquatic plant management plan before a drought progresses very long. Aquatic plants can be reduced or controlled through several practices including use of recommended aquatic herbicides and stocking of grass carp. Excellent aquatic plant identification and control recommendations can be found on the Texas A&M University's Aquaplant website http://aquaplant.tamu.edu/.

In addition, algae and aquatic plants become more abundant in warm water and in ponds with lower water levels (Figure 2). Although plants produce oxygen during daylight hours, they consume oxygen at night and during extended periods of cloudy weather. Also, intense sunlight can cause algal blooms to die-off, which further depletes oxygen. More abundant vegetation can also cause wide swings in pH levels because during the day when the plants are carrying on photosynthesis they use carbon dioxide (CO2), which combined with water acts as a weak acid. As the CO2 is used up, the water becomes more alkaline and can reach pH levels above 10, an uncomfortable range for warm-water fish.

The use of supplemental aeration in ponds can protect fish during a drought. The simplest solution is to use an electric aerator that provides about 3/4 horsepower of efficient aeration per acre of pond area. Operate the aerator as needed or by a timer set to operate during the night. Other aeration solutions include pumps and outboard motors. Pumps can be used to circulate pond water, and the water can be splashed over a diffuser to increase the oxygen content. A drop of at least 2 feet, from the diffuser to the pond water, is needed to allow time for the water to absorb oxygen from the air. Pumps are efficient in moving water but usually move less water per horsepower than pond aerators. A pump can be used most efficiently to create a sanctuary area for fish to gather rather than to aerate an entire pond. Outboard motors can be carefully positioned to stir and splash pond water, but use this method only in dire emergency and be sure to follow safety precautions. 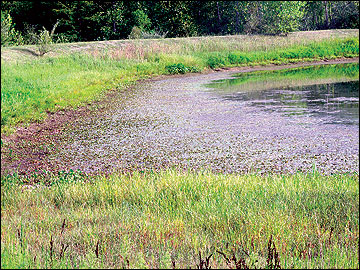 Reducing the chance of a fish kill during a drought

In addition to watching for and treating for an oxygen depletion by providing supplemental aeration, pond owners can reduce the chance of a fish kill by taking take preventive actions in the management of a drought-affected pond.

Drought conditions may increase the prevalence of some fish diseases. Diseases that occur in warmer water temperatures include columnaris, aeromonas, enteric septicemia of catfish (ESC) and several viral infections. Any stressful condition increases the likelihood that these diseases will occur. Parasitic diseases including gill parasites and grubs may become a problem as fish are crowded into smaller volumes of water.

Columnaris is a bacterial disease that is more frequent in temperatures above 70 degrees F than at lower temperatures. This bacteria is present in the soils of most ponds and becomes pathogenic when fish are stressed or in crowded conditions. Pond water pH may be increased by liming during the winter months to make columnaris infections less likely.

Other soil-borne bacteria that are common belong to the genus Aeromonas. Aeromanos infections occur when fish populations are overcrowded and under increased stress. Partial oxygen depletion can cause increased infections. If aeromonas is observed in species such as channel catfish, feed Romet medicated feed immediately. For medicated feeds to be effective, feed them for the specified time at a quantity that will deliver the proper dose to the fish. If you are currently restricting feed to your fish, you should increase the feeding rate to the amount that fish will consume in 20 to 30 minutes when feeding medicated feed.

ESC is caused by a bacteria that is carried by most catfish in the U.S. Most ESC infections occur in water that is between 75 and 82 degrees F and are the result of fish being exposed to stressful conditions. Common stressors that encourage an outbreak of ESC are low dissolved oxygen or a rapid change in water temperatures.

Shallow water and crowded fish populations can attract wading birds and other wildlife that may carry diseases. Yellow grub infestations seem to have increased in Missouri the past few years and become more prevalent during drought conditions. Controlling snails in ponds may prevent severe infestations, but control measures may not be practical. Including red-ear sunfish as one of the bream species when stocking ponds may help reduce the danger of a grub infestation; these fish forage on snails and other invertebrates that spread diseases.

To prevent stress, avoid moving fish in hot weather. If fish must be moved, use calcium chloride, calcium carbonate or sodium chloride to harden the fish before transport.

Observe your pond and quickly react to changes

If possible, observe your pond daily during a drought. As discussed, a drought will cause a pond and its water quality to change, which will impact the fish. Your quick reaction to these changes may save your fish or reduce treatment costs. Remember that the water will be hot and that increased temperatures accelerate the chemical and biological processes occurring in the pond. Make a plan for how you will treat various problems so that you will know what to do and can quickly take corrective action when a problem is identified.