Liming acid soils increases yields and provides a number of other benefits. Liming a soil from a salt pH of 4.5 to 6.0 can increase soybean yields by 15 percent (Figure 1). If soybean yields were at about 40 bushels per acre, this would mean an increase of about 6 bushels per acre. Benefits from liming come from increasing the soil pH to a crop's most favorable range for growth.

Other benefits provided by liming soils include: 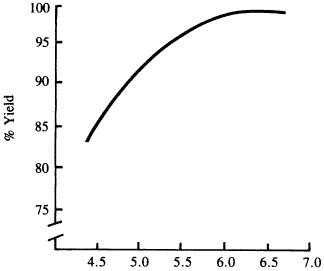 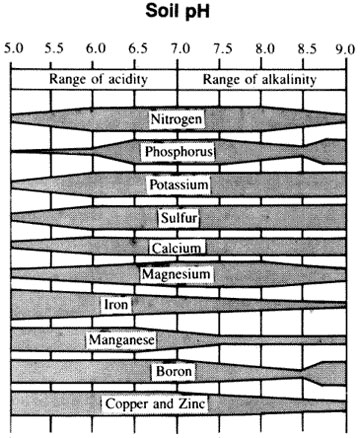 Figure 2
Effect of change in pH on the availability of plant nutrients. (Adapted from Emil Truog, USDA Yearbook of Agriculture, 1943-47.)

What is soil acidity?

Soils can have two types of acidity:

Hydrogen ions in the soil solution are referred to as active acidity. Active acidity can be measured by a salt pH soil test.

Note
The salt pH of soil indicates whether limestone is needed to reduce soil acidity.

Much can be learned simply by knowing the pH of a soil. Most Midwestern agricultural soils have a pH range of 4.0 to 9.0. Soils with a pH of near 4.0 probably have free acids in the soil solution from the oxidation of sulfides or high exchangeable aluminum. Soils with a pH of 5.2 or less have high amounts of exchangeable aluminum and manganese. They are toxic to many crop plants and thus reduce growth and yield.

Soils with a pH of 7.8 to 8.2 have free calcium carbonates (limestone). These soils generally tie up vast amounts of phosphate fertilizer, holding it back from crops and decreasing available supplies of many micronutrients to the point of deficiency for some crops. A soil pH greater than 8.5 indicates high exchangeable sodium and very poor structural condition of the soil. When wet, these soils are greasy and get puddled. They are hard as concrete when dry.

The MU Soil Testing and Plant Diagnostic Services, http://soilplantlab.missouri.edu/, uses an acidity measurement called the salt pH, but many commercial laboratories use a water pH or water pH measurement. This may be confusing if you have used both labs. Most of the time, the water pH is about 0.5 units higher than the salt pH reading.

For example, if water pH is about 6.0, salt pH might be 5.5. You should use caution when converting from one pH reading to the other because the relationship between the two tests is not always consistent. Natural salt levels in the soil affect the amount of difference between the results of the water pH and salt pH tests.

Just about everything people and nature do to the soil tends to create acidity. Soil acidity develops gradually in soils because:

Table 1. The amount of effective neutralizing material (ENM) required to neutralize the acidity produced by 100 pounds of nitrogen from various sources.

Effective neutralizing material (ENM) is a term used to express an amount of agriculture limestone to apply to soil to get the proper change in soil salt pH. A soil test recommendation will call for a given amount of ENM to be applied if the soil is acidic. The recommended amount is based on the crops to be grown and the amount of neutralizable acidity in the soil.

An acid soil reacts slowly with limestone because limestone is not very water soluble. Grinding limestone finer improves its solubility and speeds up reaction with soil.

When limestone reacts with soil, acidity (or hydrogen ions) is removed. Hydrogen attached to the clay is exchanged with calcium from the soluble limestone. The hydrogen is then in the soil solution and reacts with the carbonate, also from the soluble limestone, to form carbonic acid. Carbonic acid is not stable in soils and further breaks down to carbon dioxide gas and water. The hydrogen has then been converted from an acid ion on the clays to a neutral molecule of water. Acidity is reduced (Table 2).

Many people think calcium is the key to reducing acidity. However, without the carbonate, the soil would still contain the acid hydrogen ion and pH would not change. Some people wrongly sell gypsum (calcium sulfate) as an acidity reducer for soils. Gypsum will not reduce soil acidity. Calcium from soluble gypsum does replace hydrogen on the clays. The hydrogen then reacts with the sulfate in soil solution to form sulfuric acid. Sulfuric acid is stable in the soil and remains in the system, thus there is no change in pH. The acid hydrogen ion remains as an acid hydrogen ion.

Numerous products are still sold as pH adjusters to unknowing farmers and homeowners. Many of these are liquid products containing "chelated" calcium. These products, like gypsum, have essentially no effect on soil pH. Always seek research evidence about such products from a reputable university.

Table 2. Adjustments of limestone rates based on the depth of incorporation and neutralization..

Soil acidity begins to affect nearly all crops adversely when the salt pH falls below 5.5. Soil test summaries of MU Soil Testing and Plant Diagnostic Services, http://soilplantlab.missouri.edu/, suggest there is some reduction of soil acidity statewide (Table 3). However, more than a third of the soil samples tested in 1984 still show severe acidity problems. Yield reductions are likely.

Table 3. The percent of soil samples testing below salt pH of 5.5.

Alfalfa is sensitive to soil acidity in Missouri. When seeding alfalfa, you should be sure the soil pH is already above 6.0. To achieve this goal, you may need to apply limestone six to 12 months prior to seeding on very acid soils. On established stands, maintain the pH at 6.0 to 6.5. If you are soil sampling an established stand of alfalfa, apply limestone if the salt pH falls below 5.8. Under very acid conditions where you can only topdress limestone, apply no more than 3 tons of agricultural limestone at one time. Wait one year and apply the remaining lime requirement.

If a soil has a salt pH of 5.3 or less and you haven't applied limestone at seeding, success in establishing alfalfa is unlikely. Under those circumstances, apply the limestone and delay alfalfa seeding until the next planting season.

Corn, wheat, cotton, and sorghum are more tolerant to soil acidity than are soybeans. Plan limestone applications accordingly. Apply limestone six to 12 months prior to growing soybeans. Corn, wheat, cotton and sorghum will all grow well when soil salt pH is at 5.3 or more. However, soybeans do best at salt pH 5.8 or above. Generally, you should apply limestone to bring the soil salt pH to 6.0 to 6.5 range. When a recommended rate of effective neutralizing material equates to 2 or more tons of limestone or the soil salt pH is below 5.5, lime the row crops.

In pure grass stands, soils may become more acid without a noticeable decrease in production. But if you interseed a legume such as red clover, you will need to lime in most cases (Figure 4). Fescue may do well down to a salt pH of 4.8 to 5.0, but red clover will probably show reduced growth at a salt pH below 5.5. 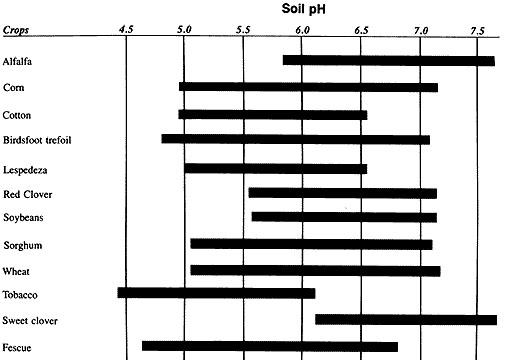 On an extremely acid soil (salt pH less than 5.0) where plans are to grow crops without tillage, the best practice is to apply the full requirement of ag lime and till the lime into the soil.

Herbicide activity and nutrient availability tend to be most critical in the top inch or two of soil in no-till. For maintaining a favorable soil pH, surface application of ag lime has worked well in no-till. The ag lime will increase soil pH in the root zone over time, naturally moving down slowly. The only caution comes with creating too high a pH at the soil surface. This can be avoided by only applying ag lime when soil tests dictate the need and limiting single applications of ag lime to no more than 1,500 pounds ENM per acre regardless of soil requirement. Additional ag lime could be applied a year later if soil pH still dictates the need.