Scorpions make up a small order of arthropods closely related to spiders. They have eight legs, a combined head and thorax called a cephalothorax, and a segmented abdomen. At the front of their bodies is a pair of large pincer-like appendages, which they use for catching prey. Their abdomens are segmented with an elongated tail ending in a stinger, usually carried curved up and over the body.

Several species of scorpions are found in the United States, with most inhabiting drier habitats in the South and Southwest. The only naturally occurring species in Missouri is the striped scorpion, Centruroides vittatus (Figure 1). Adult striped scorpions are 2.5 inches long, yellowish tan with two broad, darkened longitudinal bands on the top of the abdomen. The female produces living young, which she carries on her back for five to 15 days until they leave and become independent. After three to four years, the young reach maturity and may live two to five years as adults.

Scorpions hide during the day and are active at night. Although usually found in drier habitats, they require moisture and may be attracted to moist areas. They tend to live under boards, stones or other objects; or beneath loose bark on trees and logs. They generally do not like extremely high temperatures and, during the summer, may enter the living areas of a home seeking relief from heat and dryness. When they come indoors, they are most often found in crawl spaces and attics.

Scorpions can survive well in terrariums and make interesting pets. They feed on spiders and soft-bodied insects. Small prey may be eaten immediately; larger prey are stung and then eaten after they stop moving. 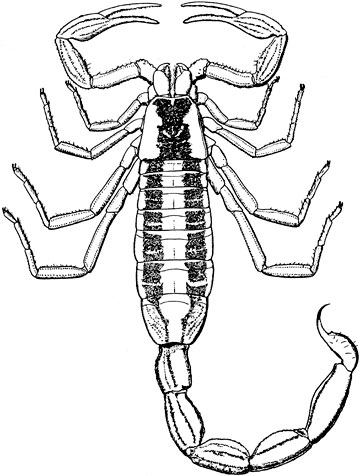 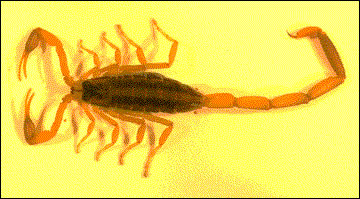 All scorpions have venom glands located in the bulbous last segment of the abdomen, which also bears a stinger. Scorpions rarely sting humans except when pinned against the skin. The sting of the striped scorpion usually results in pain, swelling and redness at the sting site, which lasts for a few hours and has been described as similar to a bee or wasp sting. A sting does not usually require medical attention. Some species of scorpions, found only in southern Arizona and Mexico, have been responsible for human deaths.

To make the area around the house less hospitable to scorpions and block their entrance into the house, take the following control measures: