The boxelder bug, Boisea trivittata, lives outside but may invade homes as temperatures cool in the fall each year. This bug is distinctive in its appearance and coloration (Figure 1). Adult bugs are about 1/2-inch long and 1/6-inch wide. They are black with red lines on the back of the body. One red line runs along each side of the body and diagonal red lines are found on each wing. Immature bugs are mostly red with black only on the head, legs and front of the body. 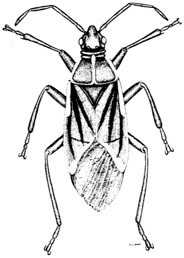 Boxelder bugs typically congregate on a preferred host plant. They may number in the thousands and are more common on female, seed-bearing trees. They feed on the leaves, flowers and seed pods of boxelder trees and other trees of the maple family — particularly the silver maple. They normally cause only slight damage to their host plant, including distorted leaves or damaged seeds, but this is usually of little concern because boxelder maple is not highly regarded because of its weak branches, messy seeds and short life span. Boxelder bugs may also feed on fallen fruit or seeds on the ground.

Boxelder bugs lay groups of about six small, yellow to reddish-brown eggs on leaves and in cracks or crevices of bark. Small red nymphs hatch from these eggs, develop into adults during the summer and mature in August and September. Adults and nymphs congregate in large numbers on trunks of host trees and then fly in search of overwintering sites as temperatures and day-length decrease. They have been known to fly up to two miles. Aggregations cause concern to homeowners when they occur on the side of structures where bugs attempt to enter through cracks and crevices in search of a safe overwintering location.

Once inside, boxelder bugs hide in small cracks and crevices in the attic, walls, doors and window casings. They also hide under siding and clutter around the foundation of the home or in leaves in gutters of the home. They remain dormant during the winter, except on warm days when they move about and may create a nuisance.

In late March to early April, adults leave their overwintering sites. They become a nuisance indoors as they crawl or fly in search of openings to the outside. Fortunately, they produce no odor, nor do they damage or injure wood, cloth, fruits, vegetables, humans or pets.

Wandering bugs indoors can be removed by vacuuming, hand-picking, sticky traps or a fly swatter. Silica aerogels are non-abrasive, chemically inert dust materials that may also be used as dehydrating agents. Drione dust is one type of silica aerogel that has been shown to be effective against boxelder bugs when applied in confined areas such as wall voids when the bugs are overwintering.

Because boxelder trees are the chief source of food for boxelder bugs, homeowners would benefit by removing these trees, especially the seed-bearing female trees. The same strategy would apply to silver maples. Don't plant or allow these species to become established on your property. If you don't want to remove trees, or, if you don't have these trees but are still having a problem with boxelder bugs, you can take the following preventive measures:

When aggregations of boxelder bugs are seen on the trunks of boxelder trees or the foundation and sides of a structure, you can spray the bugs and the area where they are aggregating using over-the-counter insecticides. The following active ingredients are commonly available:

Check the label on insecticide containers to verify that boxelder bugs are listed before using them. Thoroughly apply the insecticide to the surface of the aggregation and to the foundation and sides of the building or trees close to the aggregation. If you have not repaired and caulked cracks and crevices around doors, windows, siding and the foundation where the bugs may enter, you should spray into these cracks and crevices. You may need to repeat spray applications later because all insecticides break down over time due to environmental degradation.

Handle insecticides with care. Follow directions on the label. Keep insecticides off skin and out of eyes, nose and mouth. Wash immediately with soap if insecticides come into contact with skin and after completing any spray application. Store unused insecticides in a dry area out of reach of children and pets. You may also choose to hire a professional pest management company to apply insecticides where needed.