Small branches accumulating on the ground and the presence of clean-cut twigs, and in some cases dangling (flagged) branch tips within a tree, indicate the presence of beetle pests referred to as twig girdlers and twig pruners. Both of these long-horned beetle species (Cerambycidae) attack numerous types of shade, nut and fruit trees. Heavily damaged trees appear ragged and unattractive, and young trees can become deformed by repeated attacks.

Biology
The adult beetle is about three-fourths of an inch long, stout, grayish-brown with a lighter colored band across its elytra (wing covers) and has antennae as long as its body (Figure 1).

Adult beetles typically begin to emerge in mid-August and continue through early October. During this time, the adult female chews a V-shaped groove around a small twig, girdling it (Figure 2). She then deposits an egg beneath the bark in the twig section beyond the cut (severed portion). This is because the larva is unable to develop in healthy sapwood. The cut made by the adult female is deep enough around the twig so that the girdled portion dies quickly and usually falls to the ground, either because of wind or its own weight. 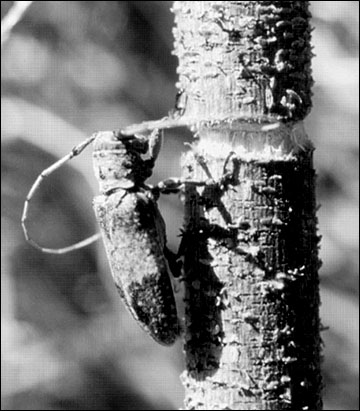 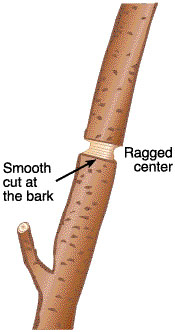 Figure 2
Adult female twig girdler chews a V-shaped groove from the outside inward, leaving a ragged center where the twig breaks and a smooth cut on the outside near the bark.

During the oviposition period, large numbers of girdled twigs often accumulate beneath the tree each day. After hatching from the egg, the developing larva bores into the dead twig to feed. The small larva will overwinter in the fallen twig. During the following spring, the larva resumes feeding, consuming most of the wood.

As the larva grows it bores further down into the twig and fills the tunnel with wood shavings and waste. Pupation occurs in a cavity within the twig. Adults emerge in late summer and early fall. Twig girdlers produce one generation a year.

Control
Homeowners should collect and destroy infested twigs and branches they find on the ground, beginning in September or no later than May. If practical, prune infested twigs still in the tree.

Owners of commercial pecan orchards should look for severed twigs, beginning in August. Apply insecticide carbaryl to trees only if you see damage. In severe cases, you may need to apply insecticide two to three times at two-week intervals. Be sure to follow label rates and directions.

Biology
The adult beetle is about one-half of an inch long, slender, grayish-yellow, with long antennae. It has spines on the first few joints of the antennae and at the tips of the elytra.

During the spring, about the time of budding and new growth, adult beetles start to emerge. The adult female will chew a hole in the bark at a leaf axil near a twig tip and there lay an egg. The larva bores into the twig and feeds on the wood as it tunnels toward the base of the twig.

When full-grown (late summer), the larva begins to make concentric cuts through the wood outward from the center and usually stops chewing at the thin bark layer (Figure 3). The larva moves back into the severed portion of the twig. Shortly thereafter, an infested branch, which can range in diameter from 1/2 inch to 2 inches, usually breaks and falls to the ground. During the fall, small branches with smooth, concave cuts accumulate under infested trees. The larva will continue to feed for a time but will overwinter as a pupa in the fallen twig or branch. Twig pruners produce one generation a year. 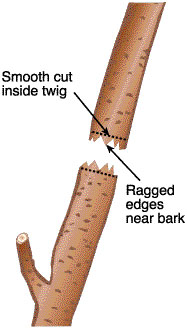 Figure 3
Full-grown twig pruner larvae chew through the wood from the inside outward, leaving a smooth cut on the inside of the twig with ragged edges near the bark where the twig breaks.

Control
During the fall or winter, gather fallen branches from the ground and prune suspected infested branches still in the tree and burn them.