Whiteflies are closely related to aphids, mealybugs and scale, all of which feed by sucking sap from plants. Whiteflies can be found on the undersides of leaves and are active during the daytime when the temperature is warm. When a heavily infested plant is disturbed, white clouds of winged adults fly into the air.

Some species of whiteflies can become serious pests of certain vegetable crops, greenhouse plants or ornamental plants. Two of the most important species are the greenhouse whitefly, Trialeurodes vaporariorum, and the sweet potato whitefly, Bemisia tabaci. In colder climates, whiteflies die outdoors, but in warmer climates, as well as indoors and in greenhouses, they can reproduce throughout the year with several overlapping generations.

Adult whiteflies are about 1/10 to 1/16 inch long and look like tiny moths (Figure 1). They have four broad, delicate wings that are held rooflike over the body and covered with a white powdery wax. Adult females usually lay between 200 and 400 eggs. Sometimes the eggs are deposited in a circular pattern in groups of 30 to 40 because the female will often keep her mouthparts in the plant to feed while moving her abdomen in a circle.

Within about a week, the eggs hatch into flattened nymphs, called crawlers, that wander about the plant. Soon, they insert their mouthparts into the plant and begin to feed. After their first molt, the nymphs lose their legs and antennae. They attach themselves to the undersides of leaves with several waxlike rods coming from their bodies, giving them the appearance of small white oval scale. The nymphs remain fixed to the plant and feed for about four weeks. After a pupa stage, the adults emerge and live for about one month. Within a population, all life stages are present, and generations often overlap.

Also, whiteflies suck out more plant juice than they can digest, and they excrete the excess as a sweet, sticky substance called honeydew. The honeydew covers leaf surfaces and acts as a growth medium for a black, sooty mold. Both the removal of plant juices and the presence of the black, sooty mold growing on the honeydew can interfere with photosynthesis.

In some parts of the country, some species of whitefly can transmit several plant viruses. 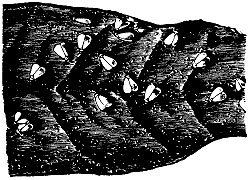 Cultural control
Ornamental plants in or around the home and plants in greenhouses or gardens often become infested with whiteflies through the introduction of infested plants. A slight infestation from one plant can quickly spread to other plants. Inspect all new plants thoroughly, and isolate them for a few days before placing them among established plants. During this isolation period, inspect the plants and treat those infested.

Inspect plants regularly, and remove by hand older leaves that are heavily infested with whiteflies in the nonmobile nymphal and pupal stages.

Biological control
Whiteflies have many natural enemies in the garden setting, such as spiders, lady beetles and lacewings. However, frequent or widespread use of insecticides to control other garden pests prevents these predators from effectively controlling whitefly populations

The tiny parasitoid Encarsia formosa has been used successfully in managing whitefly populations in greenhouses and conservatories for many years. However, in an outdoor setting where favorable temperature and light conditions cannot be maintained, use of E. formosa is limited. E. formosa is available from commercial suppliers.

Mechanical control
The use of traps can be very helpful in controlling light infestations of whiteflies in greenhouses. You can make a trap from a 12-by-6-inch strip of cardboard or strong poster board. Paint both sides bright yellow and coat with a sticky substance, such as Tanglefoot, petroleum jelly, petroleum jelly/mineral oil mix, mineral oil or a heavy-grade motor oil (SAE 90). Hang the trap vertically or support it on stakes just above the plants. The adults are attracted to the yellow color and become trapped on the sticky substance. Whitefly traps are available commercially also.

The use of yellow traps outside may have limited value because of the large number of traps required. One trap for every two large vegetable plants is recommended. Clean the traps periodically to remove insects and other debris, and apply fresh adhesive to the yellow surface. To avoid trapping too many of the whitefly’s natural enemies, use traps when whiteflies first start to appear, but remove them when the whitefly population seems to be decreasing.

Another mechanical technique that can help control whiteflies is to vacuum them with a small, hand-held vacuum cleaner. Vacuum the adult whiteflies in the early morning when the temperature is cool and they are slow-moving. Put the vacuum bag containing the insects (not the vacuum cleaner itself) inside a large plastic bag and freeze for 24 hours to kill the insects. Vacuuming adults is most helpful and effective when an infestation is just starting and when the adults have not laid many eggs.

Chemical control
In many cases, controlling whiteflies with insecticides has been difficult because they have developed resistance to some chemicals. Because of this resistance, a certain product may work well in one area but not in another. Resistance may be delayed by alternating the types of chemicals used. In addition, the eggs and nonfeeding pupae are generally not as susceptible to insecticides as are the nymphs and adults. Consequently, eradication of a whitefly population usually requires four to five applications of a registered insecticide at five- to seven-day intervals. Be sure the applications are made to the lower leaf surface. Apply the insecticide as soon as whiteflies are detected; do not wait until populations become severe.

Before you use any insecticide for whitefly control, make sure that both the site and the target plant are listed on the label. Follow label directions carefully.