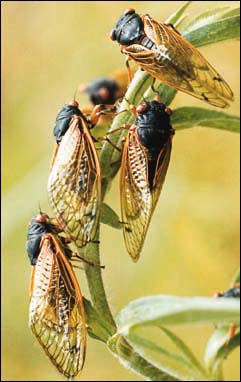 The adult female cicada uses a sawlike ovipositor to cut through the bark of twigs and branches, preferring those less than 1 inch in diameter, and forms a pocket in the wood where she inserts her eggs (Figure 2). She then will move forward, cutting a new pocket, and lay more eggs. This process may be repeated several times and may produce a continuous slit along the length of the twig. Leaves of the attacked branch can wither and turn brown, and smaller infested branches may break off the following year. Such damage can be serious to young transplanted trees in nurseries and orchards.

Cicadas are heavy-bodied, wedge-shaped insects that have large compound eyes and membranous wings held rooflike over the body. Periodical cicada adults range from 0.75 to 1.5 inches in length. They have a brownish-black body, unspotted from the top, and reddish colored eyes, legs and wing veins. They have a 13-year or 17-year life cycle.

After hatching, the nymphs drop from the twigs to the ground, enter the soil and begin feeding on sap from the roots. A nymph will remain underground at a depth of 2 to 18 inches until it is ready for its last molt. Before its final molt to the adult stage, the nymph will emerge from the ground, leaving a finger-sized round hole, and climb up the trunk of a tree, fence post or side of a house and attach itself with its claws. The exoskeleton will split down the middle of the back and the adult will gradually pull itself free, leaving the cast skin still attached to the substrate. The adults can live from five to six weeks.

Occasionally, the cicada nymph, just prior to its emergence, will construct earthen chimneys or towers above the soil surface. These towers are about 2--4 inches tall with a diameter of about 1.5 inches and are sealed at the top. This occasional tower-building habit of the nymph appears to be influenced by shallow soil, the proximity of the nymph to the surface, conditions of unusual warmth which brings the nymph prematurely to the soil surface, or excessive soil moisture. One may find a cicada tower surrounded by holes from which individuals emerged without making a tower.

Male periodical cicadas will begin "singing" shortly after their emergence (from late-May to early-July). This song, a mating call that is different for each species, is a rhythmical shrill that is produced by two drumlike membranes on the sides of the first abdominal segment. During outbreak periods the cadence of the male chorus can be quite loud and incessant. The singing begins at dawn and ceases at evening. As the temperature rises during the day the volume of the singing also increases. 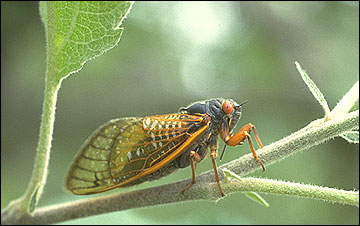 There are six species of periodical cicadas, three with a 17-year life cycle and three with a 13-year life cycle. Broods of cicadas (or groups of individuals that hatch/mature at about the same time) emerge in different years and have different geographic ranges. The 13-year cicadas are generally found in the southern United States and the 17-year cicadas in northern states, but there can be overlap and both life-cycle types may occur in the same woods.

Table 1 shows the occurrence and state distribution of the periodical cicada in Missouri.

Table 1
Occurrence and distribution of the periodical cicada in Missouri.