Pruning is often misunderstood and improperly practiced. Proper pruning is not difficult if a regular maintenance schedule is followed. A plant that has been neglected is difficult or impossible to prune. Therefore, pruning should begin before a plant has reached maximum size for the space occupied. When a plant has become too large for normal pruning, it should be replaced. Using dwarf plants in limited spaces reduces pruning needs.

Hand shears are probably the single most important tool for pruning. They are used to cut out branches up to 3/4 inch in diameter. Twisting shears to cut larger branches will strain and weaken them. The anvil type (Figure 1, left) is satisfactory for general pruning. The scissors or draw-cut type (Figure 1) is preferred for close-cut precision pruning.

Lopping shears (Figure 2) are designed to cut branches 3/4 to 1-1/2 inches in diameter.

Pruning saws (Figure 3) are used for branches larger than 1-1/2 inches in diameter. Pruning saws have narrower blades with coarse teeth that are designed to cut on the pull stroke.

Hedge shears (Figure 4) are used for shearing hedges or formally shaped plants. Hedge shears are not satisfactory for other pruning purposes.

Keep pruning tools sharp so they make smooth, clean cuts. To help prevent spread of disease and decay, disinfect all tools with denatured alcohol after pruning diseased parts of plants.

Shrubs that flower in late spring and summer are best pruned in early spring. Avoid major pruning in late summer and early fall, as this may force late growth that will be damaged by freezing.

Two techniques are used for pruning shrubs. These are called heading and thinning.

Heading. By this method, branches are cut back to healthy buds (Figure 5). This leaves a cut close to a bud from which new growth develops. 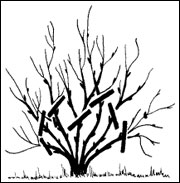 Thinning. By this process, a shoot or branch is completely removed either back to ground level (Figure 6) or back to another main branch or trunk (Figure 7). No prominent stub remains.

Some plants require more of one method than another, but good pruning is usually a combination of both procedures. 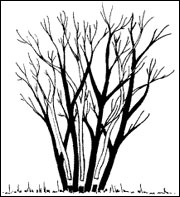 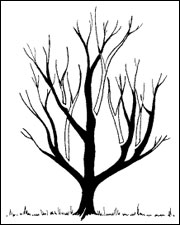 Figure 7
Thinning back to main branch or trunk.

When heading back, always make the cut above a healthy bud. A cut on a slight slant, 1/4 inch above the bud is the correct method (Figure 8). The top bud should be located on the side of the branch that faces the direction preferred for the new growth. Some plants will have two buds opposite each other on the stem. When such stems are cut, it is often desirable to remove one of the buds. If both are allowed to grow, a forked and often weak stem may develop.

Figure 8
When heading, cut above a healthy bud.

Narrow-leaved (coniferous) evergreens
Shrubs. Junipers and yews are the most commonly planted of the narrow-leaved evergreens. Although some dwarf forms are available, most cultivars require some annual pruning to control size, shape and density. More compact plants result when long branches are pruned back to their junction at a lateral branch during early spring. Cuts should be made "back in" so that new growth will soon cover exposed stubs (Figure 9).

Green foliage must remain on any branches of junipers that are cut back. They seldom are able to develop new growth from bare stubs. Yews can be cut back more severely and are often able to survive a 50 percent size reduction. Vigorously growing yews may need a second light pruning later in the summer to remove long shoots that have developed. Severe pruning to either of these types of plants should be done in April, although light pruning may be done at any time of year.

Arborvitae, as well as juniper, develops a dead zone in the center of the plant. When pruning is done either on the tip or the sides, cuts should not be made into the dead zone. Any severe pruning of these plants should be done in March or April. Overgrown arborvitae cannot be pruned back more than 20 percent. 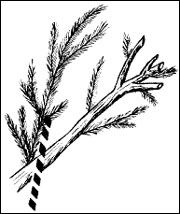 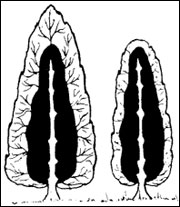 Figure 10
Pyramidal junipers may be shortened by 20 percent, but do not cut into the dead zone (shown here in black). 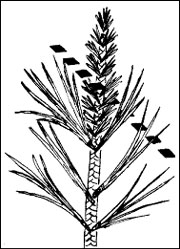 Figure 11
Trim mugho pine "candles" by half to promote compactness. 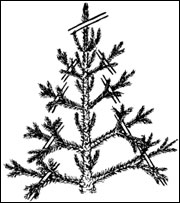 Figure 12
Prune evergreen trees by removing half of new growth. 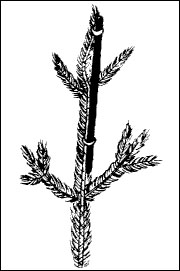 Pyramidal junipers may be reduced in height by about 20 percent (Figure 10) but should not be cut into the dead zone. A new leader cannot develop on plants that have been cut back too far.

Mugho pines may be pruned in the spring when the new shoots, which look like candles, develop. When the "candle" has extended almost to its full length, but before the needles are fully developed, remove about half the length of the "candle" (Figure 11). This will promote compactness of the plant. This method may be used on other pines as well.

For many years, shearing evergreen shrubs has been popular. However, sheared plants produce a formality not suitable for modern, natural landscapes. The shearing process often aids in spreading disease and other plant problems. Once a plant has been sheared, it is almost impossible to restore its natural form. It is, therefore, best to reserve shearing for hedge plants.

Evergreen trees
The narrow-leaved evergreen trees in Missouri are mainly pines and spruce. Fir, hemlock and Douglas fir are also sometimes planted. All the tree forms of these plants grow quite large under good conditions. If planted where they have adequate space for growth, they are seldom pruned. When pruning is necessary, it is done in early summer with the removal of half of the terminal candle (Figure 12). For extra bushiness, terminals of lateral branches may be removed as shown.

Terminal buds of evergreen trees are easily damaged. If more than one shoot develops from a damaged tip, only the strongest shoot should be left to develop into a new terminal. When the entire terminal dies or is removed, a new leader can be developed by tying up a lateral branch where the original terminal had been (Figure 13).

New growth on lateral (side) branches may be cut slightly shorter than that on the leader. Evergreen trees will not recover well if cut back severely.

Rhododendrons may occasionally need some light pruning. It is important to remove flower stems as soon as flowering is finished (Figure 14). Failure to do this promptly can reduce flowering the following year. Carefully cut or pinch out the flower head, leaving the small developing buds at the base of the flower.

Both azaleas and rhododendrons should be pruned after flowering. Never cut into areas of bare stems or sparse foliage. These shrubs will sprout poorly or not at all. When a fairly severe pruning is attempted, no more than one-third of the branches should be cut back in a single season. In three years, the pruning will be complete.

Mahonia and similar plants may develop old shoots with bare stems. These may be removed at ground level and the stumps will produce new growth.

American holly will stand heavy pruning. Most people prefer to prune at Christmas time when the branches can be used indoors. Japanese hollies seldom require much pruning in our area. 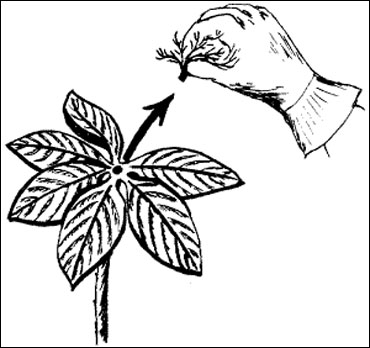 Deciduous shrubs
The majority of plants used in Missouri landscapes are deciduous. Deciduous shrubs are generally divided into two groups — species that produce their flowers early in the spring and those that bloom in summer or fall.

Flowers are produced on these shrubs from buds formed the previous summer or fall. If these shrubs are pruned before they bloom, many of the flower buds will be removed, reducing the flowering display for that season. To ensure maximum flowering, these shrubs should be pruned as soon as possible after blooming is completed. Wounds heal quickly at that time and dead wood can be easily seen.

For easiest pruning, first, with pruning shears remove all weak growth and dead, diseased, split or crossed branches. The form and shape of the shrub can be most easily maintained by starting at the top of the shrub and working down.

Next, use the loppers or pruning saw to remove as many of the oldest canes as necessary at ground level. The previous pruning was necessary to determine which branches could be removed without appreciably changing the overall form or shape of the shrub. One-third to one-fourth of the stems should be removed annually so that the shrub is completely renewed every three to four years. This technique promotes vigorous growth, which forms strong flower buds.

Plants such as pyracantha and Japanese quince produce flowers and berries on branches more than 1 year old. For this reason, these plants should never be pruned excessively at one time.

Summer- and fall-blooming shrubs include such plants as abelia, beautyberry, butterfly bush, rose of Sharon, crape myrtle and summersweet. Most of these plants flower on wood that is produced during the current growing season. These plants should be pruned at any time before new growth begins in spring. The method of pruning is similar to that described for spring flowering shrubs. A few, such as butterfly bush and beautyberry, are often cut back completely to the ground level in spring.

Hedges
A hedge must be pruned regularly to remain attractive. Most hedges need trimming at least twice a year, but some need as many as three and four trimmings a year.

A dense hedge must be developed slowly. Never try to make a hedge reach the desired height in a single season or it will be thin and open at the base. Plants such as privet or barberry need severe pruning immediately after planting and at the beginning of the second year to make them bushy. 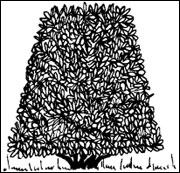 Figure 15
Maintain hedges wider at the base than at the top.

Roses
Popular roses such as the hybrid teas, floribundas, grandifloras, hybrid perpetuals and polyanthas should be pruned in early spring as the buds are swelling but before growth has started. Remove all dead wood by cutting at least an inch below the dead area. In some cases, entire canes may be winterkilled and should be removed.

Vigorous plants that have not been killed back should be pruned to between 18 and 24 inches. Remove all weak, thin wood at the base and select three to five strong canes. Vigorous canes should be cut to a large, strong bud preferably facing outward.

Shrub roses that flower only in spring should be pruned after they have flowered. Generally, this consists of removing old canes, dead wood and dead flowers. They should be allowed to develop in their natural shape.

Fall pruning of hybrid tea roses should consist of removing some of the top, brushy growth. This will reduce the tendency for the bush to be torn loose during the winter by high or persistent winds.

Climbing roses may require two types of pruning. Those climbing roses that are derived from hybrid tea varieties such as climbing Peace or climbing Crimson Glory should not be pruned heavily, and only dead wood, weak wood and bloomed-out flower stems should be removed back to a vigorous bud. Occasionally, old canes may be removed.

The vigorous climbers known as ramblers that flower in the spring only may be pruned after flowering. Remove old, woody canes that have finished flowering at ground level. Allow new canes to remain and head back those that become too large. New canes trained in a somewhat horizontal position generally flower more heavily than those allowed to grow in a vertical position.