Establishment and Care of Buffalograss Lawns 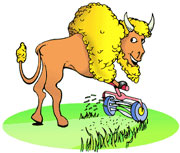 Buffalograss (Buchloë dactyloides) is the only grass native to North America that is used widely for turfgrass. Fossils discovered in Kansas show that buffalograss existed in that region at least 7 million years ago. It was the principal forage grass for the American bison, hence the name. Buffalograss is well adapted to the drylands of the western prairies and plains, and new varieties have been developed that extend its natural area of adaptation.

Buffalograss is a warm-season grass that spreads by aboveground stems called stolons. Reproduction is dioecious — female and male flowers are located on separate plants. Stamen containing pollen on male plants are located high in the turfgrass canopy, whereas female flowers are found near the base of the plant. Because male flowers extend above the canopy in unmowed turf, selecting a cultivar with both male and female plants (Table 1) can be an aesthetic consideration. The female burrs, or protective shells, each containing one or more seeds, are difficult to harvest because of their location deep in the turfgrass canopy. For this reason, buffalograss seed is more expensive than the seed of most other turfgrass species.

Buffalograss adapts best to full sun, but acceptable turfgrass can be grown with 6 to 8 hours of direct sunlight a day. It is one of the most heat and drought tolerant of turfgrass species. During extended dry periods without moisture, buffalograss goes dormant to avoid drought stress and will remain dormant until moisture is available. Buffalograss has better cold tolerance than other warm-season turfgrasses, but the degree of cold tolerance varies among cultivars.

Buffalograss may be seeded or it may be vegetatively established using sod or plugs, or both, depending on the cultivar (Table 1). Seeded cultivars will have both male and female flowers; sodded types are predominantly female.

The best time to plant is late spring or early summer, although sod and plugs may be planted as late as August or early September, assuming that the weather remains warm enough for a root system to develop before winter. Success with a late-summer planting also depends on cold hardiness of individual cultivars.

Plugs should be set at least 2 inches in diameter and 21/2 inches deep. Plugs may be planted on 6-inch to 24-inch centers, depending on how fast coverage is needed. Prerooted plugs that have been allowed to develop roots in pots for several weeks are preferred and will establish more rapidly than plugs that are not prerooted.

Fertilize the newly planted area with 1 pound of nitrogen per 1,000 square feet using a 10-10-10 or similar fertilizer. Water often enough to prevent moisture stress. Careful use of herbicides is needed during the establishment period to minimize plant competition to the new buffalograss planting. Begin mowing when plugs are well rooted. Mow often enough to only remove about one-third of the vertical growth at each mowing. Frequent mowing will also help to reduce competition from weeds.

Sodding is more expensive than plugging but will give instant turfgrass canopy in areas that must be used immediately or on slopes where erosion may occur. Soil to be sodded should be moist before the sod is installed. Sod should be placed so that the end seams of adjacent strips are staggered as in brick laying. Place sod pieces snugly against adjacent pieces, and lightly roll or tamp to ensure good sod-to-soil contact. Post-installation care for sodded areas is the same as that for plugged areas.

Buffalograss seed burs should be planted at a rate of 1 to 3 pounds per 1,000 square feet. Seeding at the higher rate should provide complete lawn coverage in one season. Seed should be planted at a depth of 1/2 inch or less. The seedbed can be prepared using a power rake, verticutter or a slit-seeder machine that opens grooves in the soil and then deposits seed during one operation. Seed may also be broadcast on the prepared seedbed using a drop spreader. Gently rake the seed into the soil surface and then roll to ensure good seed-to-soil contact.

Before planting seed burs, prime them for germination by soaking them in potassium nitrate to weaken the coat. Hulled, deburred seed is sometimes available but is much more expensive than burs.

After seeding, apply straw or other mulch at a rate of one bale per 1,000 square feet. Lightly water the seedbed daily when there is no rain. As seedlings emerge and develop, water less frequently but often enough to prevent drought stress. Mow seedlings at a height of 2 inches when the new seedlings have reached a height of 3 inches. Try to remove no more than one-third of the vertical growth at each mowing. About six weeks after seeding, apply a slow-release nitrogen fertilizer at a rate of 1 pound nitrogen per 1,000 square feet.

Patience and perseverance are often key to establishing a buffalograss lawn. Buffalograss does not germinate as a dense stand like tall fescue. One seedling per square foot is enough because buffalograss becomes progressively thicker each year as the stolons spread. During the first and second years, persistent attention to weed control may be required. Weeds may be removed by hand or by spot spraying with Roundup.

Buffalograss is a low-maintenance grass and will fail if overmanaged. Established buffalograss requires only 1 or 2 pounds of nitrogen per 1,000 square feet per year. Select a fertilizer with a nitrogen-to-phosphorus-to-potassium (N-P-K) ratio of 3-1-2 or 4-1-2 and at least 35 percent slow-release nitrogen. Apply fertilizer at a rate of 1 pound nitrogen per 1,000 square feet in June and again in late July or early August.

Water buffalograss only enough to maintain growth and prevent dormancy, if desired. Buffalograss will survive extended drought but will lose color as it enters dormancy. Overwatering will promote weed competition and may increase the incidence of disease.

There are several options for mowing buffalograss. Where moderate- to high-quality turf is desired, mow once per week at a height of 2 to 3 inches. For low-maintenance areas, mow at 3 to 4 inches every three to four weeks. Buffalograss may also be unmowed except for an annual spring mowing at 3 to 4 inches to remove old growth.

Keys to weed control in buffalograss

Buffalograss does not compete well with weeds because of its low density, so stands of buffalograss tend to be weedy.  Annual weeds may be controlled with spring applications of preemergence herbicides labeled for use on buffalograss, such as Dimension, Ronstar G or Surflan. Other preemergence herbicides may give equally effective annual weed control. Broadleaf weeds, including dandelions and plaintains, may be controlled with any of several products that contain 2,4-D and are labeled for buffalograss. For control of winter annual weeds and invasive cool-season grasses, such as tall fescue or Kentucky bluegrass, spray Roundup on dormant buffalograss in winter before spring greenup begins.