Establishment and Care of Zoysiagrass Lawns

Zoysiagrass was introduced into the United States from Korea about 1900. A Zoysia japonica seedling with improved winter hardiness was selected from early plant collections and was released in 1951 under the name 'Meyer'. This variety has better low-temperature tolerance than most other zoysiagrass varieties and is still the best choice for the Midwest transition zone. Zoysiagrass is adapted to the southern two-thirds of Missouri, where it is used primarily for home lawns or golf courses where a dense, low-cut turf is desired.

Zoysiagrass is a warm-season grass that spreads by both rhizomes and stolons. Stems and leaves are tough and stiff. It requires only occasional irrigation and may give excellent-quality turf from mid-May through mid-September. Although zoysiagrass is a good choice for hot weather, it goes dormant as soon as fall frosts arrive and stays brown until weather warms in spring.

Zoysiagrass grows best in full sun and requires at least six to eight hours of sunlight. It will tolerate moderate shade, but the turf will be thinner and less competitive in shady areas. Zoysiagrass requires less supplemental irrigation and fertilization than most other turfgrasses. It grows best when maintained with low to moderate nitrogen fertilization. Established zoysiagrass competes well with weeds and other turfgrasses. 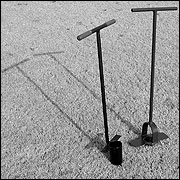 Figure 1
Use a long-handled bulb planter, or plugger, to remove soil cores before planting zoysiagrass plugs. 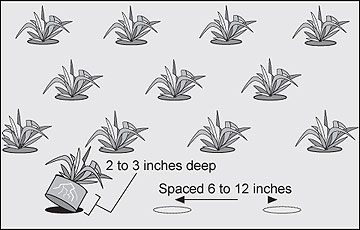 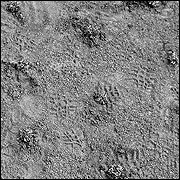 Figure 3
Press the plugs into the holes by foot or by light tamping or rolling to ensure good contact with the soil.

Zoysiagrass lawns generally are established vegetatively with plugs (small cores of sod), sprigs (stolon or rhizome sections), sod or strips of sod. Zoysiagrass can also be established by seed. However, the varieties that are currently available often display variable leaf width, color and require further evaluation in the Midwest for winter hardiness. The best time to vegetatively establish a zoysiagrass lawn is during late spring to early summer. Late-summer (mid-August) plantings may not allow sufficient time for complete establishment making turf more susceptible to winter injury. Plugs and sprigs should be planted between late April and June. Sod can be laid as late as September as long as temperatures are warm enough for the sod to root into the soil.

Proper soil preparation will lead to successful establishment and easier care of your lawn during succeeding growing seasons. Twelve steps for zoysiagrass establishment are listed below. These steps may not all be required to successfully establish your lawn. For example, soil need not be completely tilled where grading and soil amendments are not required and when soils are not excessively compacted.

While sodding is the most expensive method of zoysiagrass establishment, it does result in an "instant" turf. Although several weeks are required before a newly sodded turf can withstand traffic or play, sodding does provide an established turf cover. For this reason, it is often the preferred method of planting on erosion-prone sites.

Sodbeds should be moist, but not wet, at the time of sodding. If soil is excessively dry, especially under high temperatures, rooting may be poor regardless of subsequent irrigation practices. Sod should be laid so that the ends of adjacent strips are staggered. Individual strips should be fitted firmly against adjacent strips and lightly tamped or rolled to provide uniform contact with the soil. When laid on sloping terrain, sod strips should be secured in place with stakes until rooting is sufficient to stabilize the sod.

Strip sodding
Strip sodding is a variation of complete sodding in which sod strips 6 to 12 inches wide are laid 1 to 2 feet apart and allowed to spread together. Strip sodding is less expensive than sodding, but the turf must be managed properly to achieve full coverage in a reasonable amount of time.

Plugs are small pieces of sod, two or more inches wide with 2 to 3 inches of soil and roots.

A specially designed tool called a plugger or a long-handled bulb planter should be used to remove cores of soil the same size as the zoysiagrass sod plugs. This will make planting easier and ensure better soil contact with the plug. A starter fertilizer, such as 8 pounds of 12-12-12 per 1,000 square feet, may be raked into the upper inch of bare soil before planting. The plugs should be kept moist before they are dropped into the holes. They are inserted into the soil, usually at 6- to 12-inch spacing, so that the tops of the plugs are flush with the soil surface. Closer spacing will give more rapid coverage. Plugs may be pressed firmly into the holes with the foot or lightly tamped or rolled after planting to ensure good soil contact. With no competition from other grasses, expect two growing seasons for complete coverage.

Keeping plugs moist for the first two or three weeks after planting is essential to prevent the roots from drying out.

The term "sprig" refers to a portion of the zoysiagrass plant that includes a short piece of the stolon or rhizome, roots and leaves, but not soil. Sprigging is less expensive than plugging and may give a faster rate of cover. However, sprigs require more initial and post-planting care than do plugs and are less likely to survive under adverse conditions.

The individual sprigs may be purchased from nurseries or separated from pieces of sod. Approximately 2 to 3 square yards of mature zoysiagrass sod will be needed to sprig 1,000 square feet of lawn surface. Late spring is the best time for planting sprigs. A starter fertilizer may be applied before sprigging.

Plant the sprigs in rows about six inches apart. Narrow furrows, 2 or 3 inches deep, can be made with a sharp spade or hoe. Do not let the sprigs dry out during planting. When planted in the furrow, one end of the sprig should be at least 2 inches below the surface of the ground, but part of each sprig must be above the ground. The furrow may be closed with a light roller or by walking on it to ensure good soil contact.

An alternative to planting sprigs in rows is to simply broadcast the sprigs onto a prepared bed. Water frequently (as many as 3 or 4 times a day) to prevent sprigs from drying out. A straw mulch (1 bale per 1,000 square feet) will also help prevent drying.

Converting an existing lawn to zoysiagrass

Plugging and strip sodding can be used not only in planting zoysiagrass in bare soil, but in introducing it into an existing turf. For example, a Kentucky bluegrass lawn can be converted to zoysiagrass by planting plugs into the bluegrass turf. The conversion process is usually slow, but it can be accelerated by adjusting cultural practices to favor the zoysiagrass. Keep the lawn mowed short (1 inch) to help the zoysiagrass spread. Fertilize on a schedule (May to August) to favor the zoysiagrass. Apply light applications of nitrogen fertilizer (about 1 pound of nitrogen per 1,000 square feet) every four weeks during the active growing season. It will take two to five years for the zoysiagrass to take over under normal circumstances. Excessive fertilization and irrigation will increase competition of existing grasses and will slow the spread of zoysiagrass.

Under most conditions, sprigging into an existing lawn is generally not as successful as plugging due to competition from the existing grass. Therefore, the planting area is prepared by killing the existing sod or weeds with a nonresidual herbicide, such as glyphosate or glyfosinate-ammonium, and sprigged five to seven days later. This procedure will also speed establishment by plugging or strip sodding.

Fertilizing
Established zoysiagrass requires less fertilizer than many other species for healthy, attractive turf. A seasonal total of 2 pounds of nitrogen per 1,000 square feet is ample. Excessive or untimely fertilizer applications can lead to problems such as fewer roots, more thatch, diseases, and more topgrowth that requires increased mowing.

For best results, soil testing is recommended before fertilizing. A soil test will indicate major nutrient deficiencies and the acidity or alkalinity (pH) of the soil. Slightly acidic soil pH (6.0-6.5) is best. Lime should be applied only if the pH is less than 6.0.

Established zoysiagrass should be fertilized from May through August. Early spring (March/April) fertilization benefits weeds and promotes premature topgrowth before roots begin to grow. Late fertilization (September) may interfere with the natural hardening process before winter.

Where soil test indicates low phosphorus or potassium levels or where basic fertility levels are not known, use a fertilizer with a ratio that more closely approximates 1:1:1 or 2:1:1.

Mowing
Zoysiagrass is mowed at a shorter cutting height (1-2 inches) than Kentucky bluegrass or fescue. In the spring of the year, zoysiagrass lawns may be mowed at the lowest setting on your mower to remove dead leaf tissue. This increases the greenup rate and allows easier and more uniform mowing during the growing season. The mowing height should be raised in September by 1/2 to 1 inch in preparation for fall.

When mowing, never remove more than one-third of the leaf blade at any one time. Clippings need not be collected if they do not remain as clumps on the lawn surface.

Watering
Zoysiagrass is a drought-tolerant lawn grass that requires less water than Kentucky bluegrass to remain green and actively growing during the summer months. Watering usually is not necessary except during prolonged dry periods.

Cultural practices, such as proper fertilizing, mowing and thatch control, can go a long way toward building a drought-tolerant lawn.

Thatch is a layer of decomposed and partially decomposed roots, stems, stolons and rhizomes. Thatch appears as a distinct horizontal layer of brown spongy or feltlike material just above the soil surface. Zoysiagrass is prone to thatch accumulation because of its thick network of rhizomes and stolons and coarse, tough stem tissue. When managed properly, clippings returned to a zoysiagrass lawn contribute little, if any, to the thatch layer.

Lawns should be dethatched when thatch exceeds 1/2 inch in thickness. A spring-tine power rake or vertical mower will accomplish this task.

If thatch is greater than one inch, do not attempt complete removal in one year. Instead, remove the thatch over a period of two or three years. Intensive coring should also be considered since this causes much less damage to the turf than does power raking or vertical mowing.

Thatch buildup can be minimized through good cultural practices, including the following:

A properly managed zoysiagrass lawn is very competitive with weeds. However, winter annuals, such as chickweed and henbit, can be a problem when the grass is dormant. Weeds will also invade turf after it has been damaged or weakened by insects, disease or intense dethatching.

Winter annual weeds are best controlled in the fall rather than the spring, when they bloom and set seed.

Grassy weeds, such as crabgrass, generally are not a problem in established zoysiagrass lawns. An early spring application of a crabgrass preventer may be desired while new lawns are being established or on close-mowed or regularly irrigated turf.

In general, zoysiagrass has few insect or disease problems. White grubs and billbug are the primary insect problems. Early detection and proper timing of insecticide applications is essential in preventing serious damage.

Zoysiagrass is not especially susceptible to disease, however, some diseases do appear in zoysiagrass lawns. Diseases usually can be avoided through proper cultural practices, especially mowing, fertilizing, watering and thatch control.