Pruning, or training, is one of the most important and most neglected practices in home plantings of grapes. Grapes need some form of support, and pruning is necessary to develop the plant and to maintain it on the support provided. Regular, purposeful pruning is essential for controlling the number, position and vigor of fruiting canes and the yield and quality of the fruit.

Grapes should be pruned during the dormant season, late December to March. Late-winter pruning is generally preferred because fruiting canes are likely to experience some extent of winter injury. If pruning is delayed until near bud swell, the cuts commonly ooze sap abundantly. Though not desirable, such “bleeding” seems to be of minor importance.

Some knowledge of grapevine parts is helpful in understanding pruning details (Figure 1).

Figure 1
Mature grapevine depicting summer vine growth on left and, on right, spurs with buds after pruning in March.

Numerous training systems can be used for grapes. However, the bilateral cordon system is useful for many grape cultivars because it allows excellent light and spray penetration, yields high-quality fruit, is easy to prune and pick, and requires minimal tying.

Grapes trained to a bilateral cordon system require a trellis. The end-posts should be wooden, at least 6 inches in diameter and from 8 to 81/2 feet long. When end posts are set about 3 feet deep and properly braced, the wire can be stretched fairly tight. Other posts may be smaller and need not be set as deeply as end posts. Oak posts treated with a preservative are satisfactory. Steel posts may be used for all except the end posts.

The trellis wire should be smooth, galvanized, 10- or 11-gauge wire. Post spacing, wire height and other details are shown in Figure 2.

Immediately after planting a dormant vine, remove all but one shoot (Figure 3A). Cut the remaining shoot back, leaving only two buds. Tie a string from the base of the plant, near the soil surface, to the trellis wire. About a month later, train the strongest-growing shoot up the string and let the other shoot grow along the ground.

When the vine reaches the trellis in year one or two, pinch off about an inch of the terminal shoot to force the vine to branch. Train and tie the two lateral branches to the wire to form two cordons (Figure 3B). Remove all flower clusters in year two.

During the  next dormant season, in early March, prune the lateral growth on the cordons (Figure 3C). Select 1-year-old canes spaced 6 to 12 inches apart along the cordon to form the spurs, and cut each back to four buds. Leave a renewal spur between each pair of spurs. Cut each renewal spur back to two buds. After the danger of frost has passed, growth from one or two buds per spur can be removed if vines are growing vigorously and were undamaged by low temperatures.

Generally, during the third growing season, growth from the lateral-growing cordon produces the “curtain” (Figure 3D). If vines are spaced 8 feet apart, each cordon should be maintained at a 4-foot length. Position the growth from the cordons downward during the growing season, and allow only one cluster of fruit to set during this year. In following years, eliminate the old spurs during dormant-season pruning and use renewal spurs to develop the curtain.

The cordons require periodic renewal, especially if one has been severely injured by low temperatures, insects or disease. Simply train another well-positioned shoot that arises near the base of the old cordon on the trunk, grow the new shoot for a year, and remove the old cordon the next year. 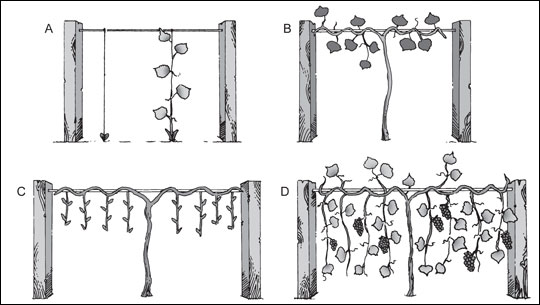 The fan system is useful for training grapes to walls and fences or to a special trellis or arbor (Figure 4). A plant pruned and trained to this system has several upright canes branching from arms on a very short trunk. This system is ideal for plants that naturally grow upright or for weak vines.

Prune the newly set plant to a short two-bud spur. If the plant grows well in the first season, both of the canes (one from each bud) may be left after shortening each to three or four buds. A weaker plant may be left with two spurs of two buds each.

At the beginning of the third season, the plant may have four or more good canes. Select three or four of the best for fruiting canes. If others are present in a fairly low position, leave two or three of them as two-bud spurs and remove any others. Shorten the fruiting canes to the height of the trellis, and tie them at the tip. Position the canes in a spreading fanlike arrangement.

The number of fruiting canes may be increased to six or eight in later years, depending on the length of the canes, or number of buds, and plant vigor. Select fruiting canes from renewal spurs where possible. Otherwise, select them from near the base of last year’s fruiting cane and, if possible, leave three or four spurs for use the following year.

Figure 4
Plant pruned to fan sysem at the beginning of third season.

Many people prefer to grow grapes on an arbor, thus combining the benefits of fruit production, shade and ornamental effects (Figure 5). Vines grown on arbors generally produce less low-quality fruit than traditional systems do. An almost endless number of arbor designs are suitable for training grapes. More important than design is that the arbor be constructed of durable materials requiring minimal maintenance.

In general, plants are placed on both sides of an arch-like structure and trained to grow up and over to about mid-point of the top. Providing this amount of foliage cover requires a larger and taller plant than is necessary for an ordinary trellis. In this situation, the tendency is to prune too lightly, if at all. Often the result is a tangled mass of multiple trunks, numerous canes, weak growth and poor fruit production. Training the plants to a single trunk and leaving relatively short horizontal fruiting canes is a suitable method for most situations.

Develop a portion of the trunk each year by tying an uppermost vigorous cane in a vertical position. At the same time, select fruiting canes at intervals of 2 to 3 feet. These should be limited to five or six buds to favor development of the upper trunk and canes. The selection and use of renewal spurs is also valuable for maintaining a source of fruiting wood close to the trunk.

Figure 5
Grapes trained and pruned on an arbor.

For tying vines, use a material that will last the entire season. Binder twine or a lighter jute twine is satisfactory.

Tying should be done during relatively mild temperatures, but before buds have swollen or started growth. Buds that are quite swollen are easily broken off. Canes that are very cold or frozen are brittle and easily broken. Such breakage is particularly likely when sharply bending the canes.