Brambles are biennial plants with two types of canes: primocanes and floricanes. For fall-fruiting raspberries and blackberries, berries are harvested in August or September from 1-year-old canes called primocanes. For summer-fruiting brambles, primocanes are 1-year-old vegetative canes, and 2-year-old canes called floricanes produce the fruit. Canes that produce fruit die after the fruit matures and will need to be pruned. Various brambles are pruned differently, and some need to be tipped during the growing season.This guide describes how to prune brambles to maintain annual cropping.

The first growing season, primocane-fruiting raspberry and blackberry plants may produce a few fruit in the fall. During the dormant season (before new spring growth), remove all canes at the soil surface (Figure 1). During the summer, new canes grow and produce a fall crop. Primocane-fruiting cultivars can be pruned to produce a small summer and fall crop. However, if a summer harvest is desired, more berries can be produced by planting cultivars that only bear a summer crop. 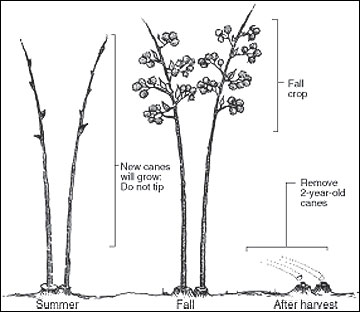 Figure 1. Prune primocane-fruiting raspberries and blackberries in the winter by removing all canes at the soil surface.

Figure 2. Prune summer-fruiting red raspberries in the winter by removing the old floricanes and thinning the remaining canes.

Summer-fruiting black raspberries, purple raspberries and erect-growing blackberries are pruned differently than red raspberries. During the first growing season, cut off tips of black raspberry primocanes (removing about 1 to 2 inches) when plants reach 30 inches in height. Summer tip purple raspberries and erect-growing blackberries when they reach 36 to 40 inches (Figure 3). Summer tipping encourages branching and increases subsequent fruit set. Because canes grow at different rates, summer tipping is done several times during the summer.  During the winter, remove old floricanes at the soil surface. Thin the remaining canes to 3 to 6 per plant, and prune the lateral branches back to 12 to 15 inches long.

Figure 3. Prune summer-fruiting black raspberries, purple raspberries and erect-growing blackberries by removing primocane tips in the summer and thinning in the winter.

Semierect-growing blackberries are pruned like erect-growing blackberries except that they require a trellis to support the canes. During the first growing season, select 8 to 10 canes per plant to fan out, and tie them to horizontal wires along a 6-foot tall trellis (Figure 4). When primocanes are slightly over 5 feet tall, prune 2 inches off the tip to enhance lateral branching.  During the dormant season, prune lateral branches back to 12 inches. In the second growing season, remove floricanes after fruiting. Tie up new primocanes and summer tip them at 5 feet. During the winter, prune back lateral branches to 12 inches.

Trailing blackberries are not grown extensively in Missouri because canes are often killed by low winter temperatures. The first growing season, leave primocanes on the ground. In late November, mulch plants or cover them with a foam-like blanket to protect the canes from winter injury. The first week of May, tie the canes to a trellis with wires about 40 inches from the soil surface. Remove winter-injured canes at the soil surface. After harvest, remove the old fruiting canes and leave the new primocanes on the ground during the growing season until winter protection is needed.

Figure 5. Cover trailing blackberries in winter, and prune them in spring.

Gooseberries, currants and elderberries produce new growth from underground crowns annually. For the first three growing seasons, leave gooseberry and currant plants unpruned. In subsequent seasons, remove the oldest canes at the soil surface during the dormant period, leaving 3 each of 1-, 2- and 3-year-old canes per plant.  The continuous replacement of new canes ensures annual bearing.  Like gooseberries and currants, elderberries produce fruit on 3-year-old or younger wood.  For  a prolonged summer harvest of fruit, selectively prune the oldest canes at the soil line during winter, leaving 2 to 3 canes each of 1-, 2- and 3-year-old wood.  However, if a concentrated harvest with large fruit is desired, annually prune all canes at the soil surface before new growth begins in spring. 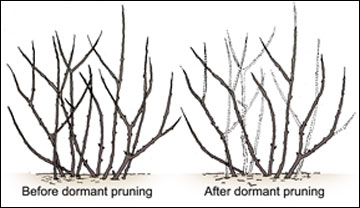