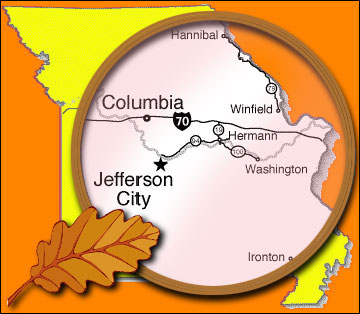 The spectacular parade of colors associated with the Indian summer days of autumn is created by a complicated series of interactions involving pigments, sunlight, moisture, chemicals, hormones, temperature, length of daylight, growing location and genetic traits. A precise clockwork within the leaf cells sets the forests of Missouri ablaze when early fall days are bright and cool, and nights are chilly but not freezing.

A favorite route for fall foliage watching in eastern Missouri is Highway 79 along the Mississippi River between Winfield and Hannibal.

Good colors can also be found on the bluffs along the Missouri River Trail in the central part of the state around Columbia and the Piedmont area around Ironton (Figure 1). 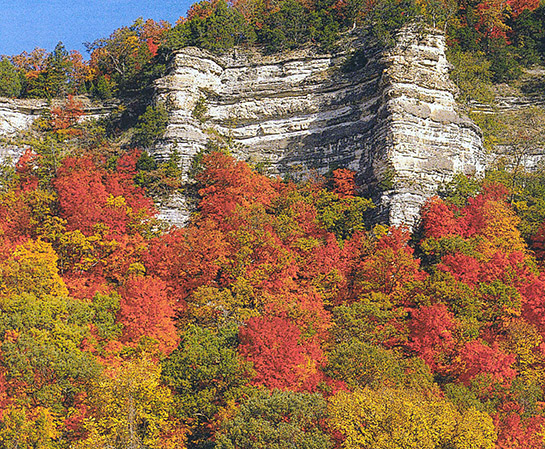 Figure 1
The white limestone bluffs along the Katy Trail in central Missouri provide a striking contrast to the autumn colors of surrounding forests.

The leaves of the growing season are green because of the formation of chlorophyll, a pigment found in minute leaf structures called plastids. Chlorophyll is the change agent for food making in green plants. These green pigments use energy from sunlight, carbon dioxide from air, and water from the tree itself to produce simple sugars that feed the tree in a delicate process known as photosynthesis.

Yellow and orange pigments called carotenoids are also present in the leaves during the warm weather of the growing season, but are "masked" by the greater amounts of the green pigments (Figure 2). Autumn's dropping temperatures and decreasing day length stop the production of new green pigments and cause existing chlorophyll to degrade at an accelerated rate. The yellow pigments are then "unmasked" as the green pigments disappear, accounting for the brilliant coloration of Missouri hardwood species such as hickories, birches, cottonwood, sassafras, poplars and hackberry.

These autumn environmental stimuli also cause the leaves to form a hormone called abscisic acid. The abscisic acid induces the plant to form weak layers of new cells at the base of the leaf stem. These abscission zones eventually break apart from wind or other physical disturbances, often causing the leaf to fall before the yellow and red pigments have deteriorated.

The pigments responsible for the vivid red and purple autumn colors of persimmons, dogwoods, maples, sumacs, sweetgums and ashes come from another group of cell pigments called anthocyanins (Figure 2). Anthocyanins develop in the sap of leaf cells in late summer and are stimulated by lowering temperatures and high light levels. If the tree's sap is acidic, the leaves become red; alkaline sap causes purple coloration. Anthocyanin formation in the leaf depends on a simultaneous increase of sugars in the presence of bright light and a decreasing level of phosphate caused by the chemical moving out of the leaf into the stem. Mild drought conditions also stimulate production of the red pigments. 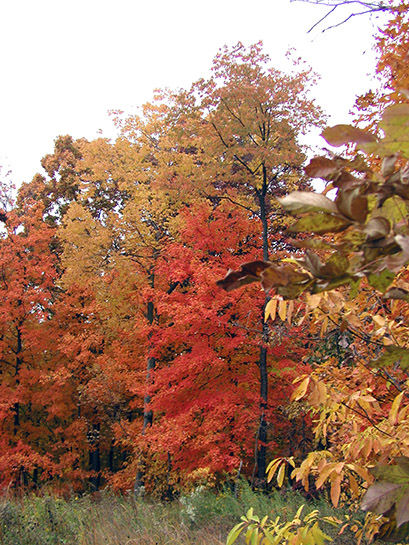 Figure 2
The orange and yellow colors of autumn throughout a hardwood forest result from the unmasking of pigments called carotenoids, while another group of pigments, called anthocyanins, creates the vivid reds and purples.

Carotenoids and anthocyanins often combine in leaves to give the deep oranges, fiery reds, and bronzes typical of many hardwood species. Brown autumn leaf color of oaks and beech is due to the presence of the brownish tannin compounds in combination with the carotenoids.

Several environmental factors can diminish the fall foliage colors. Very warm weather conditions encourage late season chlorophyll production and vegetative growth, which discourages initiation of autumn colors. An early frost before abscission kills the leaf before the pigments reach their maximum development, causing it to simply shrivel and fall to the ground. Long periods of wet, cloudy weather in fall produce a drab coloration because of low light intensity.

To summarize, cool but not freezing temperatures, mild late-season drought and sunny days are necessary ingredients for creating the brightest fall colors of the Missouri woodlands.

The fall colors displayed by 32 common deciduous trees native to Missouri are listed below.