Smooth bromegrass (Bromus inermis) is a cool-season grass introduced into the United States from Hungary in 1884. Smooth bromegrass was widely used in the upper half of North America during the late 19th and early 20th centuries, with distinguishable northern and southern varieties. Interest in the species flagged for a time but re-emerged when smooth bromegrass proved to be more resistant to the Depression-era droughts than many other introduced grasses. Testing stations from Missouri to Alaska examined its merits. 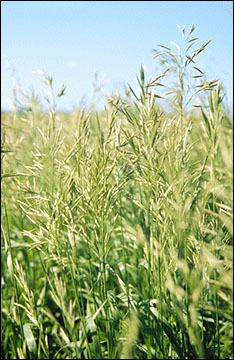 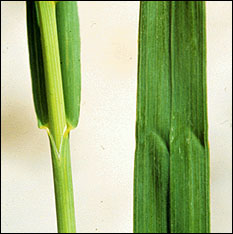 This leafy and sod-forming perennial spreads aggressively through both seeds and rhizomes. It grows 15 to 30 inches high and flowers during late spring and early summer in an open panicle (Figure 1). The presence of a w-shaped watermark midway between the collar and the tip of the leaf blade is also an identifying characteristic (Figure 2).

Because of its highly developed root system, smooth bromegrass is resistant to temperature extremes and drought. It grows best on deep, well-drained silt or clay loam but may also establish itself in sandier soils. The forage quality of smooth bromegrass is higher than that of most other cool-season grasses such as orchardgrass or tall fescue; crude protein levels in smooth bromegrass often exceed 12 percent if it is harvested in the boot stage.

However, smooth bromegrass recovers poorly from cutting because its tiller apices, or tips, are vulnerable to removal. This leads to lower yields after a first cutting and poor seasonal distribution of yield. In addition, older stands may easily become dense and sod-bound, resulting in markedly lower productivity.

Despite its disadvantages, smooth bromegrass lends itself to a variety of purposes, especially when combined with a legume such as alfalfa or red clover. It is one of the most useful cool-season grasses throughout its range, valuable for hay, pasture, silage and green chop. Its rhizomes and tough root network also make it worthwhile for ground cover and erosion control.

Almost all smooth bromegrass seed sold in Missouri is common seed. This strain, derived from the Lincoln cultivar, is probably the best choice. Although other private varieties do exist, they have not been proved effective enough to justify the increased cost.

In Missouri, smooth bromegrass may be planted from late February through early April and in September. Of these, a September planting is the most likely to be successful. Seedlings of smooth bromegrass experience less competition from weeds in the fall and will become fully established the following spring, enabling them to endure the next summer.

The seedbed must be prepared carefully. Several weeks before planting begins, germinating weeds should be discouraged through light disking, herbicide application or other preventative measures. To ensure that the seedlings establish themselves properly, the soil should be fertilized with 30 to 40 pounds of nitrogen (N) per acre. The soil should also be tested to determine if it is too acidic or deficient in potassium (K) and phosphorus (P). Ideally, the pH of the planting area should be above 5.5, the K level between 220 and 225 pounds per acre, and the P level between 30 and 40 pounds per acre. The best way to accomplish this is to take a soil sample, send it in to a laboratory and follow their recommendations.

Drilling, which ensures more consistent coverage, is the preferred method for seeding smooth bromegrass. Because the seeds contain little stored food, they should be planted 1/4 to 1/2 inch deep. This method requires 10 to 15 pounds of pure live seed per acre. However, the light, chaffy seeds of smooth bromegrass often cause feeding problems in standard drill mechanisms. Because of this, a native-grass drill is the best way to drill smooth bromegrass. This kind of drill has a toothed picker wheel rather than a fluted wheel, which enables it to accommodate chaffy seed.

Smooth bromegrass must be fertilized with nitrogen (N) to avoid becoming sod-bound. Although smooth bromegrass responds positively to nitrogen rates of up to 275 pounds per acre, applying between 80 and 150 pounds per acre usually produces the highest economic return (Figure 3). This N may come from any one of a number of sources, such as liquid nitrogen solutions, urea or ammonium nitrate. If the stand is grazed in the fall, 30 to 40 pounds of the N should be applied in late August or early September, with the rest used before the soil freezes in November or December. However, liquid nitrogen and urea may volatilize if applied before November or after February. In addition, excessive fertilization may lead to problems ranging from lodging during harvest to grass tetany and nitrate-N toxicity. The soil of a bromegrass stand should also be tested at least every other year to determine if it has become phosphorus- or potassium-deficient. 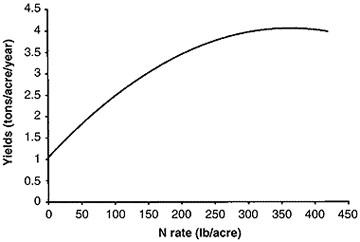 Figure 3
Maximum economic return from the application of nitrogen to smooth bromegrass occurs between 80 and 150 pounds per acre.

Weeds such as musk thistle and johnsongrass may also cause problems, particularly if the stand is to be harvested for seed. The best way to prevent these problems is to keep the stand healthy and able to compete, through fertilization and proper management. Roadsides and boundaries around fields of smooth bromegrass should be mowed to prevent infiltration. Burning postharvest residue may help eliminate an existing problem in a seed field.

Managing a stand of smooth bromegrass must be done with some care. The grass is vulnerable to overuse during its stem elongation and heading stages. Due to the destruction of shoot apices, grazing or mowing at this time will lead to thinner stands and decreased regrowth. Furthermore, summer pasturing will result in overgrazing unless the brome pasture has been understocked throughout the spring. Close grazing in fall may also cause depletion problems the next spring.

Rotational stocking, particularly in conjunction with a pasture of warm-season grass for summer use, is the best grazing method (Figure 4). Animals should be concentrated in one pasture for a period of time determined by forage availability. Such a strategy ensures the use of a greater amount of forage and permits the smooth bromegrass to recover more completely, so that the pasture will provide adequately when it is grazed again. It also enables pastures of warm- and cool-season grasses to be used at times of maximum nutrition.

Figure 4
Beef cattle grazing smooth bromegrass and orchardgrass. Rotational stocking in conjunction with a pasture of warm-season grass for summer use is recommended. Photo by Mike Collins, Iowa State Press.

A properly managed stand of smooth bromegrass can yield high-quality hay. This forage is best if it is cut between early heading and full bloom, typically around mid-May. Smooth bromegrass left much beyond this period will decrease rapidly in nutritional content. By the dough stage, the grass will be nutritionally inadequate. Also, smooth bromegrass should never be cut below a height of four inches or its regrowth potential will be greatly reduced.

Seed production is another alternative. Smooth bromegrass seed should be harvested when the culm, or stem just below the seed head, has matured and dried out, ideally on a day when the humidity is less than 50 percent. Once it has been collected, the seed should be turned daily to prevent heating. The stubble can also be collected but is much less nutritious than earlier-season hay. Seed yields typically range from 300 to 1,000 pounds per acre, but a stand older than two years may exhibit production problems. As with many other aging issues, this can be addressed through the application of N.

In summary, smooth bromegrass can be a valuable cool-season grass, especially in conjunction with a legume such as alfalfa. However, smooth bromegrass is slow to recover from poorly timed or extreme grazing or mowing. Older stands require N fertilization to remain productive. It should not be grazed or cut shorter than four inches and works best as part of a rotational-grazing program.

Matthew Bassford contributed to the development of this publication.