Odor and gas emissions from large commercial swine operations can be a nuisance. The source of odorous emissions from some swine confinement buildings is hydrogen sulfide (H2S) and other gases, especially from deep-pit buildings with long-term manure storage. Although confinement barns installed with frequent flushing systems tend to have lower overall emissions, the flushing process can cause sudden bursts of H2S gas, which can cause nuisance odors for short periods. During these periods, odor concentration can increase to about three times the baseline concentration before flushing occurred.

Manure scrapers are a practical and cost-effective option for mitigating odor and gas emissions from confinement livestock operations. Manure scrapers have been used successfully to reduce odors at free-stall dairies and to reduce H2S emissions at research-scale swine facilities. Recent evaluation of a scraper system at commercial tunnel-ventilated swine barns in northwest Missouri showed odor concentrations in a scraper barn were significantly lower than those in flush barns. Unlike flushing, the scraping process does not cause significant increases in odor concentration. In addition to offering a practical alternative to flushing for odor control, a scraper system aids in collecting manure for biogas production by anaerobic digestion.

Scraper systems can be incorporated into existing deep- or shallow-pit flushing barns, or they can be designed for new construction. The cost of installing a scraper system in an existing 1,000-head finisher building is about $7,200, and the time spent on maintenance of the system is estimated at three hours per week. Assuming that each scraper system operates 12 times a day at an electricity rate of $0.08 per kilowatt-hour (kWh), the monthly cost of electricity consumption by the scraper system is $8.20 per barn.

What is a scraper system?

In free-stall dairies, the most popular scrapers are skid-steer or tractor-driven types. Recently, many large dairies have replaced vehicle-mounted mechanical scraper systems with automatic scrapers. For swine facilities, equipment suppliers can provide parts, service and design for various types of scraper systems.

In northwest Missouri, a manure scraper system was retrofitted into 1,100-head flush barns, each of which had four flushing gutters. One scraper unit was installed in each gutter. Each scraper unit consisted of two scrapers 8.5 feet wide connected to a common stainless steel cable looped through several pulleys (Figure 1). The scrapers and cables were driven by a bidirectional 0.8-horsepower (0.6 kW) electric motor. When one scraper blade was pushing manure to the end of the gutter to drain, the other scraper blade was returning to the upstream end of the adjacent gutter. The scraper blades were designed to rotate onto suspended legs so that they pass over the manure on the upstream traverse (Figure 2). 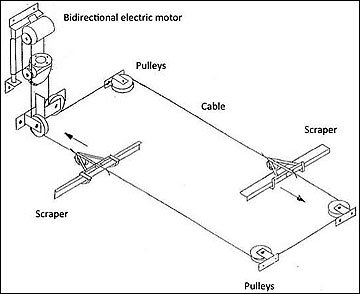 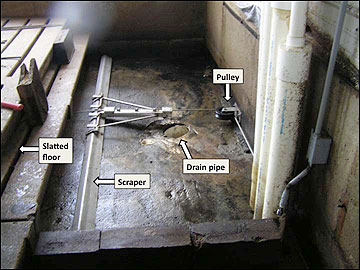 Figure 2
Manure scraper, pully and 8-inch drain in the gutter of a flush barn.

In most commercial swine operations, pigs are raised on slatted floors. Manure falls through the slats to a storage space below. The manure may be stored up to a week in barns with a pull-plug system or several months in a deep-pit barn. For some barns equipped with a flush system, manure is removed by flushing several times daily. With pull-plug and flush systems, the wastewater flows by gravity to the treatment lagoon. A mechanical scraper system allows for frequent removal of manure while reducing gas production inside the building and eliminating potential emissions from flushing activities.

Research comparing flush and scraper barns in northwest Missouri showed that scraper systems can reduce measured odor concentrations by 59 to 87 percent. The average overall reduction in odor concentration over a seven-week period was 76 percent (Figure 3). There were no significant differences between scraper and flush barns for intensity, or perceived strength, of emitted odors. 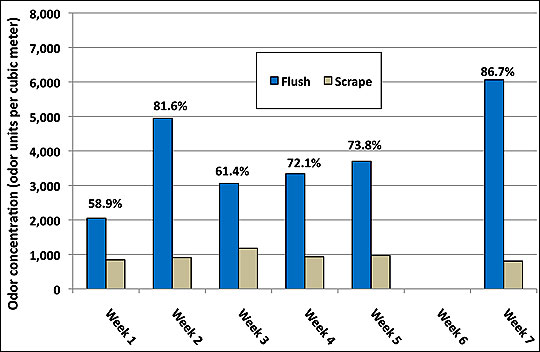 How to select and install a scraper system

A critical part of designing a scraper system is to match the system to your operation. Consider the cost, maintenance requirements and overall function of the system to fit your needs. Some manure equipment suppliers can design a scraper system to meet specifications of particular barns. It is important to consider the services and parts that local suppliers can provide and to construct your system from commercially available scraper components (see below).

Depending on the length and width of the scraper, multiple scrapers can be driven by one drive unit (motor and gearbox). Multiple scrapers per barn are often needed for swine facilities because of the layout and design of the building. When designing a scraper system, it is important to consider the maximum load, or amount of manure to be scraped, by each drive unit. This load is determined by the total length and width of the scraper system and the frequency of operation for each drive unit.

The scrapers and cables are usually powered by a drive unit consisting of a motor and gearbox. Other components of the scraper control system may include an automatic timer and safety devices to shut off operation when the scraper motion is blocked. The electric and control parts should be installed above the pit to avoid exposure to corrosive gases and to provide easy access for control and maintenance. Thus, a practical place to install the controllers and drive unit would be at either end wall of the building, where they will be protected from the animals (Figure 4).

Depending on the design and location of the manure drainpipe, some manure may accumulate and become the source of odors. To minimize the accumulation of solids, concrete diverters (as shown in Figure 5) can be installed to aid the gravity flow of manure into the drainpipe. 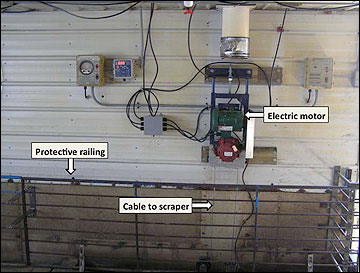 Figure 4
The drive unit and automatic controller installed on an end wall of a swine finishing barn, with protective railing in place. 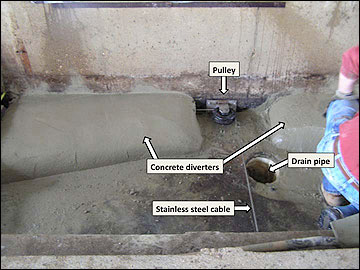 Table 1 identifies components and the potential cost of shipping and installing a scraper system for a 1,000-head finishing barn. Depending on the scraper system design and setup, there may be differences in equipment and cost. The total cost for this system, including parts, shipping and installation, is approximately $7,200 per finishing barn with two drive systems. The shipping fee is the same for up to three barns. After the installation of the first barn, the installation labor is reduced by 5 to 10 hours for each additional barn. Thus, the cost per barn will decrease with installations in multiple barns.

Table 1. Components and prices of a scraper system for a 1,000-head finishing barn.

The operational cost of the motors to work a scraper system in a standard 1,000-head finishing barn is estimated to be low. The travel speed of the scraper system is usually slow. In a commercial barn using two drive units, one scraper unit moves the scraper blades from one end of the barn to the other on even hours, and on odd hours the second scraper unit operates. This allows each gutter to be scraped every two hours, or 12 times a day. On average, seven minutes are required to scrape a single gutter, so in any 60-minute period the scraper is idle for 53 minutes. The total amount of electricity needed daily to operate each motor in the system can be calculated as 0.6 kW/unit x 12 cycles/day x 14 minutes/cycle = 1.7 kWh/day, or 3.4 kWh/day for both units. Assuming an average electricity cost of $0.08 per kilowatt-hour, the power cost to run the system would be $0.27 a day, or $8.20 a month.

As part of the standard operating procedure at the facility, the barn and scraper system were cleaned and pressure-washed between turns of pigs. Cleaning of the scraper system avoids potential odor production from long-term buildup of manure on the scraper and should increase the useful life of the system. The cables usually last one to four years. Preventive maintenance (replacing the cable) in a timely fashion is recommended to minimize the effort and trouble of locating and pulling the loose ends when a cable breaks during scraper operation.

When necessary, accumulated manure in the gutter can be discharged first by pulling the plug to the drain. Some of the outlet drains are plugged between scraping cycles to prevent pulling odors and gases from the drain by negative pressure in the barn.

For flush and shallow-pit barns, it is expected that the existing lagoons or manure storage areas will be able to receive and store the same manure amounts once the scraper system is installed. For deep-pit barns retrofitted with scraper systems, an additional manure storage or treatment facility (such as an anaerobic digester) is needed for the manure scraped daily from the barn.

In the finishing barns that were tested for odor reduction, manure was stored temporarily in pits located at the end of the scraper barn. Manure flowed by gravity through 8-inch PVC pipe (varying from 1.8 percent to 7 percent slope) and into two underground concrete pits (10 feet x 5 feet x 5 feet) located outside the barn. Manure was collected daily from the storage pits using a vacuum truck and transported to a treatment facility. Because the storage pits were closed, except when manure was being removed, odor emissions directly from the pits were minimal.

Safety is a concern when working in the manure storage pit because manure can release significant amounts of gas that can accumulate in the storage pit. To minimize risk when entering a confined manure storage space, follow procedures outlined in standard S607, “Ventilating manure storages to reduce entry risk,” published by the American Society of Agricultural and Biological Engineers.

Reviewers of this publication were Joe Zulovich, Robert Broz and Debi Kelly, Food Systems and Bioengineering, University of Missouri.