Antibiotics and Other Additives for Swine: Food Safety Considerations

Another way to compare antibiotics is to look at their scope of effectiveness.

Antibiotics have a short history. In 1929, Alexander Fleming discovered penicillin by accident when a small amount of penicillin fungus landed on a petri dish loaded with staphylococci. During the 1930s, penicillin could be obtained only from government sources and was used to treat soldiers with infections or gangrene. Penicillin was first used in the U.S. general public in 1942 to combat staphylococci among victims of a nightclub fire. Over the next 50 years, scientists and health professionals learned to make use of the therapeutic and prophylactic qualities of many antibiotics as they became available. In swine production, the development of a large number of antibiotics and other additives has helped increase gain and reduce the feed required per unit of gain. 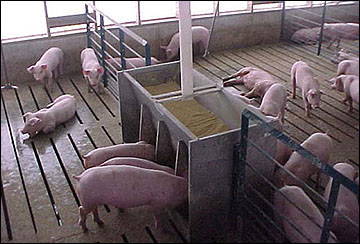 Chemotherapeutics are organic compounds with bacteriostatic or bactericidal properties similar to those of antibiotics. But, unlike antibiotics, these compounds are produced chemically rather than microbiologically. Anthelmintics, or dewormers, are also organic compounds added to swine diets generally for short intervals to help control worms in growing-finishing swine and the breeding herd.

Other additives with potential for swine feeds are also commonly used, such as carbadox and sulfas. New products are likely to continue to be developed and approved.

The referring veterinarian commonly uses feed-grade antibiotics at therapeutic levels to treat an acute disease outbreak following a diagnosis. In this way, the antibiotic sensitivity of the bacterial pathogen causing the observed clinical signs is treated with an antibiotic to which the pathogen has a demonstrated susceptibility. This mode of specific pathogen treatment results in a bactericidal or bacteriostatic effect; that is, the treatment either kills the pathogen or prevents it from spreading.

In many instances, antibiotics are used to promote growth, or weight. It is generally accepted that antibiotics aid in the promotion of quality pork growth through a direct metabolic effect, by sparing use of nutrients or by controlling low levels of endemic pathogens.

The effects of antibiotics on nutrition have been the subject of extensive research since the early 1950s. In hogs, the action of antibiotics in a nutrient sparing role is confined to the effect on the microbial population of the intestinal tract, particularly the large intestine and the lower regions of the small intestine. Microbial activity affecting nutrition in the stomach is very limited.

Antibiotics can influence nutrition in the following ways:

By suppressing disease-causing organisms, including toxin producers, in the animal's environment, antibiotics may reduce the incidence of clinical and subclinical diseases that hinder performance. Producers may see these disease control effects in a greater response to antibiotics in the following situations:

The metabolic effect of an antibiotic is defined as a response that alters the rate or pattern of some biochemical process at the tissue (muscle) level. Most growth-promoting antibiotics are not present in high enough concentrations at the tissue level to have a bacteriostatic or bactericidal effect on bacteria.

Also consider your farm's environment, management conditions, and the stage of production cycle when choosing a feed additive. These things will cause the specific feed additive and the level needed for the best response to vary.

The first few weeks of the pig's life are by far the most critical in terms of nutritional needs or health protection. Born with no protection against disease organisms, the pig enters an environment saturated with a variety of bacterial organisms.

The first milk, colostrum, of the sow will supply the pig with antibodies against the disease organisms in the surroundings, if the sow has been previously exposed to the organisms for enough time to synthesize the antibodies and concentrate them in the colostrum. However, by three weeks of age, this acquired immunity begins to disappear. The pig does not begin producing antibodies until five or six weeks of age. Thus, between three and five weeks, the young pig is most vulnerable to disease, especially to any new, infective organism that enters the pig's environment.

Also, during the early weeks of a pig's life, it is exposed to several stress conditions that render it more susceptible to diseases: castration, weaning, treating for anemia, ear notching, vaccination, climatic stresses, and exposure to internal and external parasites. Research has shown marked responses to antibiotics during these early production stages. By the time the pig reaches 40 to 50 pounds body weight, its own disease protective system — antibody formation — is functioning well, and it has adapted to environmental stresses. This is why a practical feed additive program calls for a reduction in levels as the pig develops or progresses to market weight. Fast-growing, healthy pigs may not benefit from antibiotics or chemotherapeutics during the finishing phase. However, on high health farms, improved average daily gan can be observed when low concentrations of antibiotics are fed to alter the enteric flora and prevent subclinical levels of enteric diseases that reduce nutrient absorption, such as the endemic presence of Lawsonia (ileitis) or Salmonella species.

Notes for Tables 1 and 2

These feeding recommendations are for growing and finishing swine unless specifically noted.
Feeding duration should not exceed the number of days specified, but proper withdrawal time should still be observed.
"x" implies the specific bacteria targeted.
"and" implies two different compounds approved for use at the same time.
"+" implies a ready-made manufactured combination.
1 Control of swine dysentery claim with 90 grams per ton inclusion level.
2 BMD for control of clostridium perfingens in suckling pigs when fed in sow ration from 14 days pre-farrowing and 21 days post-farrowing.
3 Can be fed to baby pigs, growing-finishing pigs and sows during gestation and lactation.
4 Virginiamycin should be fed at a rate of 100 grams per ton for 14 days followed by 50 grams per ton for treatment of swine dysentery up to 120-pound pigs and 100 grams per ton for 14 days for nonbreeding stock larger than 120 pounds.
5 Should be fed to the breeding female.
6 (Table 2) Should be fed to prestarter and starter pigs.

Proper use of feed additives

Consumers are increasingly concerned about bacterial resistance and drug residues in animal tissues. Producers should use extreme caution and follow feeding directions on the label exactly. The Food and Drug Administration regulates the use of feed additives. The Animal-Plant Health Inspection Service of the U.S. Department of Agriculture and the state feed regulatory agencies are responsible for compliance with FDA regulations and are actively initiating more rigid controls for monitoring feed and pork at packing houses for residues of feed additives. Producers should abide by the FDA regulations on removal of certain additives before selling hogs for slaughter. Disregarding these regulations could cause costly losses to producers because of tissue residues and the loss of certain effective compounds for use as feed additives.

If you use medicated feeds:

Although the responses to additives are more variable in gestating-lactating sows, you can expect a response during breeding and just before and after farrowing. Research has shown that feed additives in the breeding ration will increase conception rate and litter size, and additives in the farrowing ration increase pig survival and performance.

For certain diseases and parasites, feed additives can control a specific problem through short-term use of higher levels than those allowed for growth promotion. Correctly diagnosing the trouble and matching the additives to the problem are important. Table 1 contains a list of specific diseases and the feed-grade antibiotics that have proved effective in controlling or treating the problem.

Producers should have their own feed additive programs as prescribed/defined by a veterinarian. Some may need to feed a certain antibiotic or chemotherapeutic compound during all stages of growth and development. Others may need to feed a certain additive or combinations for a certain period, then discontinue or change to another additive for additional growth periods only (pulsating). Each of these programs can be effective as long as you maintain a standard feeding program, using certain antibiotics or chemotherapeutics for growth promotion while reserving others for disease outbreaks. Table 2 presents some recommended levels and compounds of antibiotics for improvement in growth performance and feed efficiency.

This does not mean that you should stay with one antibiotic or chemotherapeutic year after year, but you should avoid continual switching every two or three weeks or using a number of different antibiotics within a short period. By following a standard antibiotic or chemotherapeutic program, you and your veterinarian can plan and adapt a treatment or a preventive medicine program accordingly.

All pork processing facilities will be expected to have a Hazard Analysis Critical Control Point (HACCP) plan in place that will ensure that pork processed in the United States is free of salmonella contamination. There will also be a greater emphasis placed on surveillance of pork carcasses for antibiotic residues when the HACCP plans are initiated. Therefore, as producers or advisers it is imperative that you have an understanding of the reasons that a feed additive will be formulated into the ration. The table included in this guide serves as a reminder of the legally approved use of the described feed-grade antibiotics and the mandatory withdrawal periods required for each compound. It is critical that the proper feed-grade antibiotic is selected according to the history of the farm or based on recommendations of a veterinarian for the specific pathogen or condition to be treated. It is also important that the proper withdrawal time for the feed-grade antibiotic or feed additive is strictly adhered to.