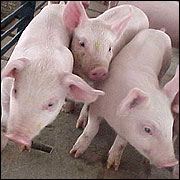 A balanced diet of required nutrients is vital in the operation of a profitable swine production. A nutritionally complete diet provides all the necessary nutrients required by the growing pig or reproducing female. Because feed is the most costly element in swine production, there is a distinct advantage in using the least expensive feed ingredients available while ensuring all nutritional requirements are met. However, producers must exercise caution when feeding some lower cost ingredients that may be of lesser quality, to avoid the increased excretion of nutrients and subsequent impact on the environment. Studying the effects of different types of mineral supplementation on animal growth can aid swine producers in developing a feed program that yields desirable gains while lessening detrimental effects associated with excretion of excess nutrients.

Minerals play an important role in animal growth and are routinely used to supplement swine diets. Minerals are divided into two categories:

The addition of microminerals (trace minerals) to swine diets benefits the growth and reproductive performance of pigs under certain conditions. (See list.) Zinc and copper are known as "gut conditioners" which alter intestinal morphology and improve absorptive capacity, reduce scours and enhance growth performance. However, copper and zinc together do not have an additive effect on growth performance. These minerals should be supplemented separately at recommended concentrations for the desired growth performance. Zinc is also important to protein, carbohydrate and lipid metabolism, it is also a required component in the synthesis of greater than 200 enzymes. Copper is needed for the synthesis of hemoglobin and for the synthesis of enzymes needed for normal metabolism. Copper and zinc function as antioxidants, which destroy free radicals and prevent oxidative damage to the cells. Selenium helps maintain the integrity of cellular membranes. There is a narrow range between nutrient requirements and toxicity of selenium. The concentration of selenium added to swine diets is regulated by the U.S. Food and Drug Administration (FDA) at 0.3 ppm.

Conditions for supplementing trace minerals to growing and reproducing pigs

Copper (After 2 weeks of supplementing zinc)

For the swine producer, zinc and copper are widely available as feed additives in two main forms, organic and inorganic. "Organic" simply means that the mineral is bound to an organic material. These materials are generally amino acid complexes, proteinates, chelates, polysaccharide complexes, and propionates. Conversely, the trace mineral in an inorganic supplement has been combined with an inorganic salt, such as zinc carbonate, zinc sulfate and zinc chloride. Although both organic and inorganic forms of copper and zinc supplements are in common use, important differences exist in the bioavailability and environmental concerns associated with the two forms.

Swine producers who recognize the need to limit excretion of nutrients fed in excess will also recognize the importance of nutrient balancing on the farm. When exploring these issues, the producer must focus on the nutrient inputs to the farm as a whole. Because the amount of nutrient excreted is directly related to its concentration in animal feed, the producer must exercise caution when selecting the concentration of particular nutrients in the diet. While the diet for pigs must meet requirements for growth and production, it must also be designed to prevent additional excretion of these nutrients. The swine producer will incur unnecessary cost when wasting feed nutrients through excessive supplementation.

The main advantage of feeding organic trace minerals is their higher bioavailability to the animal. For minerals such as zinc and copper, producers can achieve the same production goals by feeding small amounts of nutrients from organic sources as they can by feeding relatively large amounts from inorganic sources. By formulating their feed programs accordingly, producers can minimize nutrient excretion and reduce the cost of rations while maximizing swine growth for a more profitable operation.

Table 2
Suggested feed concentration of zinc and copper for all phases of production.