Body condition scoring (BCS) of cattle allows cattle producers to assess the level of fat reserves of cows during various production phases. When regularly used, this information can be used to formulate management and feeding decisions.

The aim of BCS is to obtain a simple and reliable measure of the level of body reserves in live animals. Though live-weight gives an indication of body size, it can be markedly affected by gut fill and stage of pregnancy. Careful training of scorers and periodic standardization have shown BCS to be accurate and useful on a within-herd basis.

Beef and dairy herds can use BCS so feeding and management can be regulated to ensure that breeding cattle attain the appropriate BCS at different stages of their production cycle. Action can then be taken to alter the condition of those cows not in the correct condition at critical stages of the cycle.

In both beef and dairy herds, BCS can be carried out regularly and easily in circumstances where weighing may be impossible or impractical. The technique is easily learned and is most useful when practiced regularly by the same person in the same herd over several years.

Variation in the BCS of beef cows has a number of practical implications. The condition of cows at calving is associated with length of post-partum interval; subsequent lactation performance; health and vigor of the newborn calf; and the incidence of calving difficulties in extremely fat heifers.

Condition is often overrated as a cause of dystocia in older cows. The condition of cows at breeding affects their reproductive performance in terms of services per conception, calving interval and the percentage of open cows.

Body Condition Scores (BCS) are numbers on a scale used to describe the relative fatness or body composition of the cow. The scoring system in Missouri has a range of 1 to 9, with 1 representing very thin cows and 9 representing very fat cows. A cow with a BCS of 5 is said to be in average condition; however, descriptions of an "average" conditioned cow vary. For BCS to be most helpful, producers need to calibrate the 1 to 9 system under their own conditions. See Table 1.

Keep the system simple. A thin cow looks very sharp, angular and skinny while fat cows look smooth and boxy with bone structures hidden from sight or touch. A description of BCS is given in Table 2.

Two animals of similar live weight may differ considerably in BCS. As an example, an 1,100-pound cow may be a 1,000-pound animal carrying an extra 100 pounds of body reserves, or a 1,200-pound cow that has lost 100 pounds of body reserves. These two animals would differ markedly in both biological and economical response to the same feeding and management regimen with possible serious consequences. 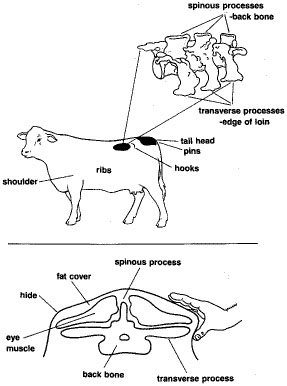 Calving interval is defined as the period from the birth of one calf to the next. To have a 12-month calving interval, a cow must conceive within 80 days of the birth of her calf. Such cows produce a pound of weaned calf cheaper than cows that take longer than 80 days, making them more profitable.

Calving intervals in excess of 12 months are often caused by nutritional stress at some point, either before the calving season or during the subsequent breeding season, which results in thin body condition and poor reproductive performance. 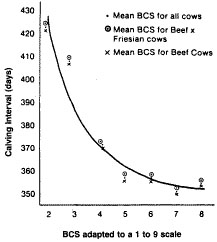 The influence of nutrition before calving is a major factor that controls the length of time between calving and the return to estrus. Cows with a BCS of 4 or less at calving, as a result of low levels of precalving nutrition, will have longer intervals from calving to first estrus than cows in BCS of 5 or higher. Young cows require about one BCS higher to achieve the same reproductive performance as mature cows, since they have the added requirement of growth.

It is much easier to increase condition in cows before rather than after they calve. High nutrition after calving is directed first toward milk production. Feeding cows to gain condition early in lactation therefore leads to increased milk production but has little effect on body condition.

The acceptable BCS prior to calving is 6 or higher. These should be the target figures at calving for all cows in the herd. Anything higher than 7 may or may not be helpful. Scores at calving of less than 5 will impede reproduction.

The influence of nutrition after calving is a major factor that controls the fertility of a cow's estrus cycle during the breeding season. A lower conception rate has been shown in cows losing condition from calving through breeding than in cows that maintain or gain condition during this time.

Many producers believe that long breeding seasons are necessary to achieve good reproductive performance. Evidence in Figure 3 indicates that this is not true. The data represented in Figure 3 were compiled from a 1980 survey of beef cow reproductive performance in 22,000 cows from 230 herds in Missouri. The average size of herds reporting was 97 cows and the average percent calf crop weaned was 80 percent. Figure 3 shows that longer breeding seasons do not necessarily increase the pregnancy rates in beef herds. 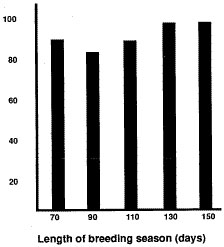 Figure 3
Relationship between length of breeding season and pregnancy rate.

In a fall calving herd, cows should be in BCS of 6 or higher at calving. In general, if pastures are adequate during the summer, this is easy to achieve. Cows in BCS of 6 can afford to lose one BCS between calving and breeding without adversely affecting reproduction.

Because cows are lactating between calving and breeding and pasture quality is declining, a loss of one BCS is typical. These cows may lose one more BCS after breeding and before pasture turnout in the spring. They will be lactating during this time and likely to be eating harvested forages. Their BCS should increase when they go to grass, particularly after the calf is weaned, so that they reach BCS of 6 at calving to begin another yearly cycle. Figure 4 illustrates changes in BCS in a fall calving herd. 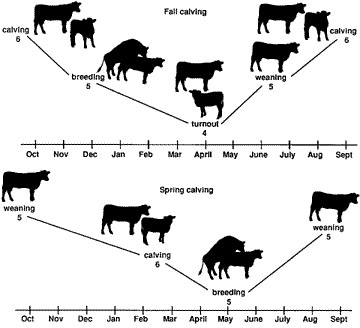 Spring-calving cows should be in BCS of 6 or higher when they calve. Lactation and the fact that the cows are still consuming harvested forages will generally result in loss of one BCS following calving. This loss is not detrimental if cows are in moderate to fleshy condition (BCS 6 or 7) at calving. But thin- to borderline-conditioned cows (BCS 3 or 4) will show decreased reproduction if they lose further condition during this period. Cows in BCS of 5 at breeding should be able to maintain their condition until weaning. They will need to gain one BCS between weaning and calving so that they reach calving at a BCS of 6 (Figure 4).

Immature cows continue growth until approximately 4 years of age. These young cows should be maintained through the yearly cycle about one BCS higher than mature cows to achieve the same reproductive performance.

Dairy cows generally are in a negative energy balance until 9 to 12 weeks of lactation. Managing body condition can help get them bred back. In dairy cows, the roughage and concentrate feeds are needed for a substantial production of milk, which typically peaks five to eight weeks after calving.

In addition, as in beef cows, feedstuffs are used for maintenance, live weight gain and fetal growth in pregnancy. Ideally, body condition scoring should be done on each cow five times a year:

More feed to the newly calved dairy animal tends to be converted primarily into milk. First-calf dairy heifers should have a BCS of 5 or 6 at calving. Calving difficulties increase when heifers are fatter. Fetal death, bruising of the birth passage and pinched nerves leading to lameness may result. Also, overconditioned cows are prone to ketosis, a condition caused by an unusually high amount of ketone (acetone) substances in tissues and fluids.

Cows with a high BCS at calving (7 or above) have been found to have a lower 305-day yield than dairy cows with a BCS of 5. Overconditioning of dairy cows at the end of lactation and in the dry period should therefore be avoided.

Table 5 shows the target body scores and timing of scoring in dairy cows.

Portions of this guide were adopted from Texas Agricultural Extension Service Bulletin B-1526, "Body Condition, Nutrition and Reproduction of Beef Cows;" Dennis B. Herd and L.R. Sprott.