Complaints about livestock odors have increased as growth in the number of large livestock operations, especially swine operations, increases the concentration of animals in small geographical areas. Many of these large operations store manure for long periods under anaerobic conditions in open manure storages or lagoons. Migration of urban residents seeking the perceived benefits of country living, such as quiet solitude and clean air, has increased the population density surrounding many livestock operations. The odor plume moving from a source tends to stay about the same width as the source and to disperse upward. Thus, the combination of large sources of odor and large populations downwind increases the likelihood that odors will affect one or more residences. Surface application of manure can result in a very wide odor plume. Liquid manure, especially, can have high concentrations of odorous compounds. Dry manure tends to emit fewer odors.

Odor complaints are more common when the humidity is high and the air is still or when the prevailing breezes carry odors toward populated areas. When the air is still, odors may flow down slopes much as water does. Surface application of relatively fresh solid manure, or a manure slurry, without immediate incorporation can cause high odor levels. Odors emanating from feedlots, manure storage ponds and undersized lagoons may lead to complaints. For this reason, site selection and control of a large land area surrounding large livestock operations to minimize close proximity of downwind neighbors are of utmost importance. Perception of nuisance odors at a given distance from a confinement facility is less common with poultry operations and most common with swine operations. In the early planning stages for such facilities, operators should check local and state regulations for separation distances required for various sizes of new or expanded confinement facilities. 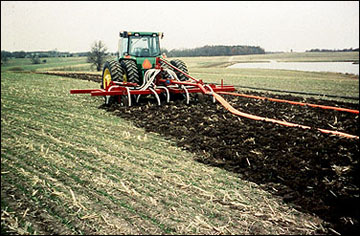 Figure 1
This hose-fed machine practically eliminates the odor from land application of liquid manure by injecting the manure into the soil.

Table 1 shows the buffer distances (the minimum distance between the nearest confinement building or lagoon and any public building or occupied residence) required by the Missouri Department of Natural Resources (MDNR).

Most objectionable odors from livestock operations are the result of volatile compounds generated during the decomposition of manure. More than 200 of these odor-generating compounds have been identified. The wide range of odorous compounds from manure adds to the complexity of odor control solutions. Commonly reported odorous compounds associated with manure and waste water are those containing sulfur (e.g., hydrogen sulfide and mercaptans), those containing nitrogen (e.g., ammonia and amines), volatile organic acids, phenols, and alcohols (Table 2). Ammonia and hydrogen sulfide are easily measured but do not necessarily correlate well with odor complaints from neighbors, although hydrogen sulfide levels from feedlots are regulated in Minnesota. Meeting ammonia emission limits might be as difficult for poultry and dairy operators as meeting hydrogen sulfide emission levels is for pork producers. Research indicates that the transport of odors is also associated with dust particles or aerosols. Therefore, controlling dust or aerosol emissions will help control odors. 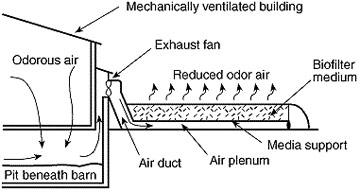 Figure 2
Passing the exhaust air from a livestock building through a biofilter (a bed of organic material, such as straw or compost) can greatly reduce odors. Source: University of Minnesota Extension Service. 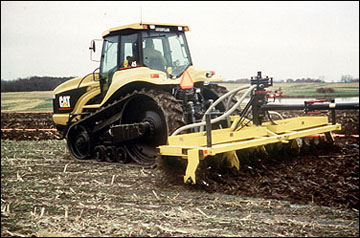 Figure 3
Liquid manure pumped from a manure storage facility is incorporated into the soil by rotating tines. This method reduces odors associated with surface application of manure.

Agitation of liquid manure storages during pumping is recommended to prevent a buildup of solids and to increase the value of the nutrients applied to the land. However, agitation of pits under buildings occupied by animals or humans can be fatal because of the release of gases that are either toxic or capable of displacing the oxygen in the building. The gases of major concern are hydrogen sulfide (H2S), ammonia (NH3), carbon dioxide (CO2) and methane (CH4). Hydrogen sulfide is the most toxic of these gases. Like carbon dioxide, it is heavier than air and can displace the oxygen in the building. Methane is explosive at mixtures between 5 and 15 percent. To prevent loss of life, animals and workers should not be in the building during pit agitation.

Because of the risk of exposure to noxious gases, avoid entering a manure pit if possible. Carbon dioxide and hydrogen sulfide tend to accumulate above the liquid in the pit and may fill an empty pit. If you must enter the pit, ventilate it with fresh air before entering and wear a harness with a lifeline to outside helpers who can pull you out if you are overcome by the gases.

This publication was printed with funds provided to MU by the U.S. Department of Agriculture through Grant number U-5-37989, Air Quality Regulations and Missouri Agriculture.