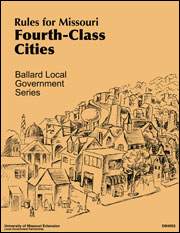 This manual is, first and foremost, the work of the late John Ballard. This edition would not be possible without the original manual that John conceived and wrote. One mark of John's authorship is his use of stories to teach. Several of those stories are included here, as John wrote them.

Practitioners of local government across Missouri also contributed to the update: Rick Purdon, former mayor of Laurie; C.J Dykehouse, Boone County counselor; Kevin O'Keefe, principal, Curtis, Heinz, Garrett, and O'Keefe P.C.; and Gary Markenson, executive director of the Missouri Municipal League. Many others provided advice and comments that greatly improved the quality of the update. We express our deepest appreciation to all who contributed to the work. They provided the quality, any errors are ours alone.

We hope this effort is useful to those who make city government work. This material is current through August 2008. However, laws change and errors slip into even the best efforts. Always check for updates and changes since publication. The following is a list of useful websites for this purpose: