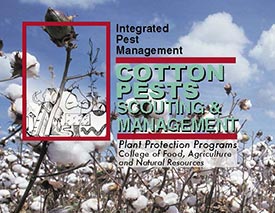 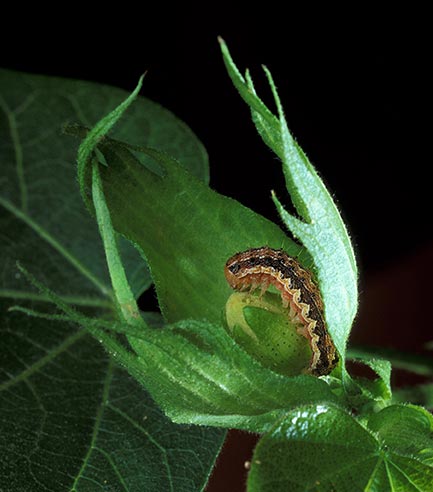 The cotton bollworm is the most destructive Lepidopterous pest in southeast Missouri. Besides cotton, bollworms feed on 350 other host plants, including corn and soybeans. Also called corn earworms and soybean pod worms, bollworms overwinter in the soil under leaf litter as pupae. They first emerge as moths in May. Female moths typically lay 1,000 eggs. Assuming that half of the first generation is female, there will be 500 daughters from one spring-emerged female. These 500 daughters quickly mate and lay 1,000 eggs each. That is 500,000 caterpillars — worms — to feed from a single female. The second generation after the spring emergence is often the pestiferous one. Of that first female’s 500,000 offspring, 250,000 are female. These 250,000 moths will be laying 1,000 eggs each within one month of being an egg themselves. That second generation will hatch 250 million caterpillars from one overwintered female.

Though small and laid singly so they are flat against the leaf, these dome-shaped moth eggs with radial ribs are visible to the naked eye. The eggs hatch in three to five days, depending on the temperature. The newly hatched larvae, which look like a period pulling a piece of thick silk, grow to 1½ inches in two weeks.

This growth rate requires an enormous amount of food, such as cotton bolls, soybean pods and ears of corn — not to mention tomatoes and peppers.

Most Missouri cotton fields are planted with transgenic varieties, which produce Bt toxins. Bollworms have developed resistance to some Bt technologies; fields should be treated if surviving larvae exceed thresholds. Pyrethroids are not recommended for controlling tobacco budworms.