Tall fescue (Festuca arundinacea) is Missouri's most widely used forage crop. It is insect and nematode resistant, tolerates poor soil and climatic conditions well and has a long growing season. Unfortunately, tall fescue also has a downside. Most tall fescue in the state is infected with a fungal endophyte, Neotyphodium coenophialum (formerly called Acremonium coenophialum) that is toxic to animals.

Tall fescue was brought to this country from Europe in the late 1800s. It was officially discovered in Kentucky in 1931, tested at the University of Kentucky and released in 1943 as "Kentucky 31." It became popular with farmers in the mid- to late-1940s and 1950s, spreading quickly throughout the midwestern and southern United States. Today it is accounts for well over 40 million acres of pasture and forage land in this country. In Missouri alone, tall fescue covers approximately 17 million acres.

Early producers of tall fescue were excited by the ease with which they could establish and maintain a stand. Soon, however, conflicting reports began circulating. For some reason animals were not performing well when allowed to graze tall fescue. Research into the causes of poor animal performance resulted in the discovery of a small fungus that grows between the cells. This fungus came to be known as the "endophyte" because it was "in" (endo) the "plant" (phyte). Follow-up research revealed that this endophyte could produce ergot-like alkaloids under certain conditions.

How the endophyte affects grazing animals

The toxins that result from the endophyte create a number of problems for the grazing animal. Animals do not gain and can actually lose body weight despite constant grazing. They also experience reproductive problems such as low conception rates and poor offspring survival. In addition, cattle grazing infected tall fescue have elevated body temperatures and loss of blood flow to the extremities, causing "fescue foot" and other symptoms. In all, it is estimated that the losses to the beef cattle industry alone are well over $609 million a year (1990 data).

Research from across the southern United States shows that the endophyte can reduce weight gain by more than 50 percent in steers fed on pasture (Table 1). It also shows that the seed head is the most toxic portion of the plant.

Agalactia — a diminished ability to produce milk — is especially severe when cows graze tall fescue during the last trimester of gestation. Agalactia leads to thickened placentas, aborted fetuses and, if the offspring should survive, a lack of colostrum and milk for the calf.

Tall fescue fertilized with high levels of nitrogen can also lead to bovine fat necrosis. As hard masses appear in the fatty tissues surrounding the intestines, this condition causes digestive problems and can also interfere with calving. High nitrogen rates also increase concentrations of toxic alkaloids such as ergovaline.

Table 1
Effect of the endophyte on weight gain in steers

Foals that survive in utero will generally be larger than normal, have overgrown hooves, poor suckling reflexes, incoordination and lowered body temperatures. Foals may also have poor immunity due to the lack of colostrum produced by the mare. Because horses are sensitive to the toxins in endophyte-infected tall fescue, even the lowest levels of endophyte can produce equine fescue toxicosis.

Sheep appear to be less affected by the endophyte in tall fescue, possibly because they are inherently hardy. However, sheep are prone to "fescue foot," hyperthermia, poor wool production and reproductive problems as well as lowered feed intake and the resulting poor weight gains.

Life cycle of the endophyte

It is important to understand how the endophyte spreads — from inside the plant (Figure 1). In its natural setting, it does not form spores and infect other plants from the air. Thus, a well-established field of endophyte-free tall fescue will not become reinfected unless the stand thins, thereby creating an opportunity for infected seed to germinate and become established. 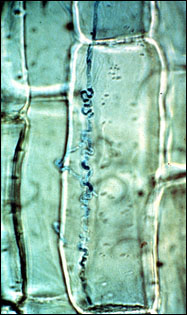 Figure 1
The tall fescue endophyte fungus inside a leaf sheath cell. The fungus is not found in a leaf blade

How to determine the presence of endophyte-infected tall fescue

Tall fescue is a hardy, perennial bunch grass with short, slow growing and spreading rhizomes. It tends to be well-rooted and forms a dense sod. Tall fescue is similar in appearance to ryegrass but has a folded leaf during the bud stage. Under ideal growing conditions, tall fescue may reach 48 inches or more in height with a loosely branching panicle for a seed head. Leaf blades are 1/8 to 1/2 inch wide and from 4 to 24 inches long. Leaves may be a yellowish to dark green color and have a dull upper leaf surface with distinct veins running the length of the leaf. Lower leaf surfaces are smooth and glossy and slightly keeled. Leaf margins are usually rough.

Is the endophyte present?

The most obvious method of determining the presence of the endophyte in tall fescue is poor animal performance and the characteristic health problems described above. However, because the endophyte grows within the plant tissue, it is necessary to submit a sample to a laboratory for testing to verify the presence of the endophyte. There are several laboratories throughout the United States that will test for the endophyte. Contact your local MU Extension center for further information on testing laboratories in your area. Follow the sampling instructions of the laboratory you contact.

Although endophyte-free cultivars of tall fescue are available, the decision to switch from endophyte-infected types is not clear-cut. The data present both sides, defining the "good news, bad news" about each type of tall fescue. With infected Kentucky 31 tall fescue, producers can expect a 50 percent reduction in animal gains, poor calving, and many other health problems. However, their pastures will probably persist. On the other hand, if they switch to endophyte-free tall fescue, they will experience excellent animal performance, but may lose stands to drought, overgrazing, insects or diseases.

Alternative tall fescue cultivars are those infected with the "novel" endophytes. These cultivars are currently being released as a compromise between infected and endophyte-free cultivars. The novel endophytes are special strains of fungus that contain much less toxin than the old endophyte. They are inserted into the plant to increase persistence.

In making management decisions, producers should consider the suggestions listed below The first suggestion is to replace infected Kentucky 31 tall fescue with endophyte-free tall fescue or another forage. The other suggestions are based on managing infected fescue.

To replace infected Kentucky 31 tall fescue, follow the "spray-smother-spray" recipe. This recipe involves spraying the infected field with an effective herbicide, seeding a smother crop, and replanting the new forage. For spring seedings of the new forage, the preceding smother crop should be a winter annual small grain, such as wheat. For fall seedings, the preceding smother crop should be a summer annual, such as sudangrass.

Caution must be exercised in the process of renovation. If the land is drought-susceptible or heavily grazed, total renovation is not wise. It is more prudent to renovate a small portion of the farm. If the land is productive, larger renovations are appropriate. In three independent studies conducted in the midwestern and southern United States, replacement with endophyte-free fescue has been cost-effective.

For several reasons, moving cattle off of fescue during the hot summer months greatly increases animal gains. First, fescue is not productive during the summer months, so moving cattle to a summer pasture simply gives them something to graze. Second, high temperatures can intensify the toxic effect of infected fescue, so moving cattle to a nontoxic pasture usually eliminates summer slump. Research in Missouri suggests that 88 degrees Fahrenheit may be a threshold for significantly decreased gain. After moving, cattle should remain off of infected tall fescue for the entire summer; researchers in other states report a residual effect of toxicity, suggesting that rotating off of tall fescue for only one to two weeks will not greatly reduce summer slump.

Dilute infected Kentucky 31 tall fescue with legumes. In Missouri, common grazing legumes for interseeding are red clover, white clover, annual lespedeza, alfalfa and birdsfoot trefoil. Each of these legumes differs in its persistence, but all can be maintained with proper management. Annual lespedeza must be allowed to reseed in late August and early September. Red clover and birdsfoot trefoil will require occasional reseeding if they are not allowed to reseed naturally every two years. Legumes should be inoculated, and mixtures should not receive much nitrogen (0 to 30 pounds per acre) unless stocking rate is high or hay is cut.

Some studies have shown that nitrogen increases ergovaline, a major toxin produced by the endophyte, and probably contributes to the nutrition of the endophyte. High rates of nitrogen can also decrease the legume component in a mixed sward. For these reasons, fertilizing for the legume is the proper approach to managing infected tall fescue.

If fescue toxicosis is more of a concern than forage yield, graze infected Kentucky 31 tall fescue closely. When it is allowed to develop seed heads, it becomes more toxic. This occurs because seed heads contain much more ergovaline than do other plant parts. In addition, mature tall fescue contains less protein and more fiber than leafy, immature fescue.

Ammoniation of hay is treating hay with ammonia. There are excellent reasons to ammoniate low-quality hay. First, ammonia breaks cell wall linkages and increases digestibility. Second, ammoniation requires hay to be covered; therefore, it indirectly provides an excellent storage facility for hay. In the case of toxic feed, a third reason to ammoniate that because ammonia can reduce the effect of endophyte toxins. (In grain crops, ammonia has the same effect on alfatoxins.) Ammoniation of toxic fescue can increase daily gains and prolactin (milk hormone) levels by at least 50 percent; this is not a response from merely improving digestibility.

In summary, although tall fescue is a viable and important forage for grazing animals, not all tall fescue cultivars are alike. Each must be managed with an understanding of the endophyte status. Those fields infected with a toxic endophyte will require management of the animal for weight gain, reproduction, and milk production. Those cultivars that are endophyte-free will require a similar level of management, though most of the effort will be directed toward plant persistence. New cultivars infected with "novel" endophytes may offer improved animal performance and plant persistence.