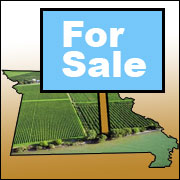 It is not always feasible to get an appraisal on a piece of land, particularly when a historical value is sought. A historical land value is often needed to calculate taxes and settle estates. When appraisals are not feasible, estimates from the U.S. Department of Agriculture (USDA) data might be an acceptable option.

The USDA updates the state average market value of Agricultural land, including buildings every year. This update relies on surveying a subset of farmers, select Realtors and others who have direct knowledge of land sales in each state. The published results do not have county values. The annual survey reports values for these four land classes: 1) All Cropland, 2) Non-Irrigated Cropland, 3) Irrigated Cropland, and 4) Pastureland. These land classes are not reported on a county basis in the Census of Agriculture. Table 2 provides the average market value of these agricultural land classes for the state of Missouri since 1950.

Every five years, in the Censuses of Agriculture, USDA reports Ag land, including buildings, for each county. Houses, barns, sheds and other buildings on the land are included in the reported asset value. This value merges all types of land, such as irrigated, non-irrigated and pastureland, together.

The USDA estimates are for either an entire county or the entire state. However, the value of land can vary considerably within any one county. More productive land is worth more than less productive land. Cropland is worth more than pastureland. Land adjacent to certain highways may be worth more than land farther from those highways. None of these factors are reported in the county and state estimates of land and buildings. For this reason, the estimate may not provide an acceptable estimate of the value an individual piece of land.

The reports provide a consistent record of trends in land values. Since the methodology is consistent over time, the annual changes reported are likely to reflect what happens on individual pieces of land. However, changes over time may cause the values of certain pieces of land to differ from the USDA reported average. For example, land 20 miles out of city limits may have been considered for only agricultural purposes in 1970. By 2020, that land may be much closer to city limits and people want to purchase that land for a house site. That may drive its value much higher than the state or county average.

The Census of Agriculture values are most useful for estimating specific land values because they provide county level estimates. The annual survey data of state land values by type is helpful for observing trends in land values in the years between Censuses. The reported values for various types of agricultural land in Missouri are very highly correlated (correlation coefficient of .95 to .99) with the reported value for Ag land, including buildings. A correlation of 1 indicates perfect correlation.

When an historical estimate of value for a particular piece of land is needed, it is advisable to start with the county level data reported in the Census of Agriculture. Because county data are reported every five years, methods of estimating the value in intervening years have been developed.

If the percent change in the annual reported state value for Ag land, including buildings accurately reflects the change for land in each county, this percent change can be applied for years when no county level data exist. The steps below indicate how a county level estimate for land value could be obtained for any year.

Step 1: Find which Census of Agriculture immediately precedes the year for which you are interested in finding a value.

Step 2: Locate the value of ag land in the county in that Census data (see Table 1).

Step 3: Locate the values for ag land in Missouri for the years between the year of the Census and the year of interest (see Table 2).

For example, if you wanted to know the value of ag land in Adair County in 2010, perform the following steps.

The estimate of county land value can be modified to account for expected value differences by following the steps below.

Step 6: Obtain an appraisal of the market value of the land. An appraisal done at any time can be used but more recent appraisals are best. The value of recently built structures should be removed from the appraisal so that only land valuation is being considered.

Step 7: Estimate the county value of the land for the year in which the appraisal was made. This would be accomplished by Steps 1-5 above.

The County Land Value Estimator spreadsheet (XLSX) was developed to accompany this guide. This tool contains the data found in tables 1 and 2 of this guide and provides a tool to estimate land values. Users can enter the county year of interest to receive estimated county values. County values can be modified to more closely approximate the value of a particular piece of land.

Table 1. Average market value (in dollars per acre) of farmland and buildings for Missouri counties.

Source: U.S. Census of Agriculture
a. St. Louis City and County are included in 1959 and 1964; all other years are county only.
b. 1997 data have been reweighted to reflect the new methodology used in the more recent censuses.
c. This is the federally recognized value for this year, yet it is abnormally high compared to peer counties and land values in subsequent years. We recommend users instead use 1,347 (average of land values in 1997 and 2007).