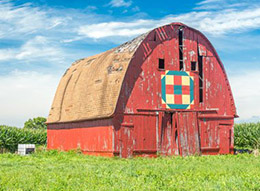 Missouri Century Farms Awards certificates to landowners with farms that have been in the same family for 100 years or more. Learn more