History of Extension in Harrison county

Recently, a booklet was found about the first 50 years of extension in Harrison County Missouri. The report titled “Excerpts From History 1919–1969,” contains information on the first 50 years of Extension. Many of the entries were amusing and gave some perspective about how the Extension service has impacted Harrison County. We wish to update the history of the extension center, which will celebrate its 100th anniversary in 2019. The booklet is included on this webpage in a PDF version of its original form. If you have any stories or information about the history of MU Extension in Harrison County in specific, please contact us. 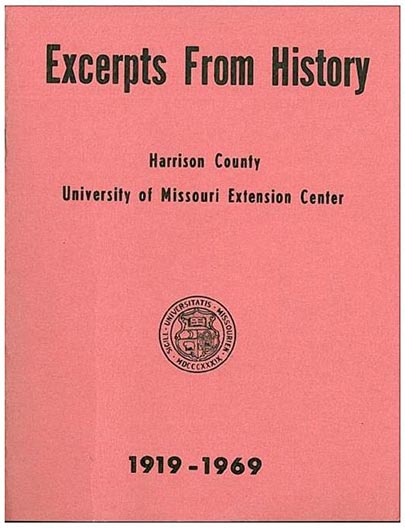 Examples of the excerpts

Mr. P.O. Salmon recalls one time when County Agent Glenn Hensley was called out to the farm which Mr. Salmon was operating for Dr. Groomer, an Economics professor at the College of Agriculture. They had some pigs that were coughing. The County Agent told them it was lung worms — which they doubted. To prove that he was right, Mr. Hensley knocked a pig in the head with a tire tool, took a sharp knife from his pocket, opened up the pig and showed Dr. Groomer and Mr. Salmon the lung worms — then told them the worms were caused from the dusty bedding.

Mr. Hensley also got them interested in raising bees to help in pollinating their fields of sweet clover. Mr. Hensley could handle the bees, but when he left the farm, the bees stayed to eat on Mr. Salmon and Dr. Groomer. This project was not considered a success.

“Our assistance to farm women was very limited for we had no Home Demonstration Agent. Mrs. Hensley, assisted by a specialist from the College, gave numerous demonstrations in the making of paper dress forms. The women found these forms of great value in improving the fit of their home-made dresses.”

“Among my more amusing remembrances are that of the farmer who came in to tell me that after I had supervised the terracing of a hillside field, he was convinced that I was running the water uphill. Unable to sleep that night, he got up, dressed and carried two buckets of water out to pour in the terrace to see which way it would run. To his utter surprise, it ran the right way and he went back to bed to sleep contentedly.”

The Harrison County Soil Testing Laboratory was opened to test soil in Harrison County. It was located in the basement of the court house on the south side. Later it moved to a room on the west side. In 1968 it was moved to a room adjoining the Extension Office Meeting Room. At that time, new cabinets were built and remodeling was completed making it one of the finest soil testing laboratories anywhere in Missouri.

The Harrison County Livestock Marketing Association organized the first feeder pig sale under the direction of John Cross. There have been fourteen pig sales held since, with an average of 1,500 pigs sold at each sale.

Fifty years of Extension in Harrison County shows us again that the present is a product of the past. We know that a knowledge of the people and events of yesterday helps us in understanding and interpreting the events and movements of today. It makes it possible to participate in them intelligently and to have a hand in their direction. We understand the past and learn from it, so we can make a maximum contribution to the work of today, which with that of yesterday constitutes the great force we call progress.