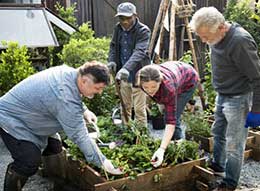 In-depth horticulture training for Missourians who wish to spread their knowledge of gardening.

Master Gardeners are trained volunteers with gardening backgrounds ranging from hobbyist to professional, from beginner to experienced, from young adult to senior citizen. The common bond is a love of gardening, learning and sharing. After training, Master Gardeners serve as a resource with University of Missouri Extension to give county residents research-based answers to their gardening questions. The primary purpose of a Master Gardener is to volunteer, but members rate camaraderie and learning opportunities as important reasons for participating. To become a Master Gardener, call 417-881-8909.

Call the hotline directly at 417-874-2963 with gardening questions. Master Gardeners are available from 10 a.m. to 4 p.m. Monday through Friday, March through October, except holidays. At other times, leave a message. Calls are returned with 24 hours.

Master Gardeners of Greene County send out a monthly newsletter – Sign up to stay in touch!

Use Tab key to loop through the section below. Press Enter or Space to enter content for each tab button. Press Esc key to exit and to go to the next section at any time.

SPRINGFIELD, Mo. – University of Missouri Extension horticulturist Kelly McGowan is on the hunt for the elusive Ozark woodland swallowtail, a pollinator unique to the Ozark region of southern Missouri and northern Arkansas.McGowan works on a ...

SPRINGFIELD, Mo. – Those who have planted gardens feel that they have “done something for the good of the whole world,” wrote American author Charles Dudley Warner in 1871.For Greene County Master Gardeners Maryfrances DiGirolamo and James ...

SPRINGFIELD, Mo. -- Volunteers in Ash Grove are continuing to work with University of Missouri Extension specialists and city officials on the development of a secure community garden. A planning meeting was held online via Zoom on Friday, May 1 to ...

Readers can pose questions or get more information by calling 417-874-2963 and talking to one of the trained volunteers staffing the Master Gardener Hotline at the University of Missouri Extension Center in Greene County located inside the Botanical ...

Get the latest version of The Garden Spade newsletter and browse previous versions.