Flowering and Fruit Characteristics of Black Walnuts: A Tool for Identifying and Selecting Cultivars

Black walnuts (Juglans nigra L.) are valued for their uniquely fruity flavor and are often used as an ingredient in baked goods and ice cream or are eaten as a snack food. Although black walnuts can be harvested from wild trees, several cultivars have been selected for such characteristics as ease of cracking, size of kernel and thickness of husks and shells. Other characteristics, such as date of budbreak, time of flowering, length of season and date of harvest, are also important as there is considerable variation within the species.

The MU Horticulture and Agroforestry Research Center (New Franklin, Mo.) maintains a repository of more than 40 named cultivars of black walnut valued for their kernels (rather than timber). The identities of each of these cultivars have been confirmed by "DNA fingerprinting." Cultivars maintained in the repository are used in a breeding program focusing on nut improvement.

This publication is intended to help walnut growers identify walnut cultivars by the appearance of the husk, shell and kernel and to select cultivars on the basis of various growth characteristics. In addition to a photo gallery of black walnuts, this publication lists the average date of budbreak, flower type, bloom period, pollination date, season length and harvest date for more than 40 black walnut cultivars. Data were collected over a four-year period from 2002 to 2006 at New Franklin, Mo.; dates reflect the growing season in central Missouri and should be adjusted for other regions. 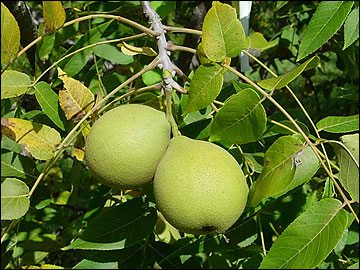