Storing Food in the Freezer 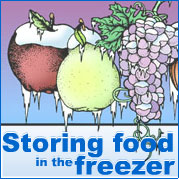 Freezing is the best way to preserve the fresh-like qualities of food. Per capita consumption of commercially frozen foods has steadily increased since 1937. The amount of home-prepared frozen foods and purchased foods frozen at home is also gaining popularity.

The colder the better

Many refrigerator-freezer compartments cannot reach or maintain 0 degrees Fahrenheit. Keep frozen foods no longer than a week in such a compartment. This kind of freezing unit usually has no separate outside door.

Use only moisture- and vapor-proof materials such as heavy-duty aluminum foil, polyethylene bags, freezer film wraps, glass, plastic and metal containers. The shrink-film wrap on meats in self-serve counters allows air to enter the package and is not suitable for freezer storage beyond two weeks. Overwrap these packages with a moisture- and vapor-proof material to prevent freezer burn.

Some foods purchased thawed, especially meats and poultry, have been previously frozen. As long as they were commercially frozen, quality changes are minimal when these foods are refrozen at home.

Generally, the faster the freezing rate, the better the quality is preserved. Commercial freezing is much faster than home freezing. With quick freezing, cells break down less. When water, a component of all food, freezes rapidly, tiny crystals form. Slow freezing forms large ice crystals which cause cells in food to rupture. Moisture leaks out and quality is lowered.

When refreezing foods that were initially frozen at home, expect quality changes. Those changes will be more extreme for texture than for color or flavor. The food, however, should still be acceptable to use.

Why packages say "Do not refreeze"

Frozen food packers want their products to have a good image with shoppers. Because quality can deteriorate if interior product temperatures rang up to 40 degrees Fahrenheit, many manufacturers do not recommend refreezing such thawed food because they cannot guarantee quality under such conditions.

A freezer (a chest or upright unit that maintains a temperature of 0 degrees Fahrenheit or below) offers convenience and flexibility, but it can rarely be justified only on the merits of saving money. To get the greatest use out of your freezer, keep it fully stocked. A rapid rate of turnover-once every six months-is recommended to greatly reduce the operating cost per pound of food.