Elderberry rust is a fungal disease that infects elderberry (Sambucus sp.) and sedge (Carex sp.) plants in the eastern United States (Figure 1). The disease is caused by the fungus Puccinia sambuci (Schwein.) Arthur. All American and European elderberry cultivars tested in Missouri are susceptible to rust. At least 12 species of sedge are known to be hosts of elderberry rust. This disease does not kill elderberry plants, but fruit yield and plant growth is often reduced at medium to high levels of infection. 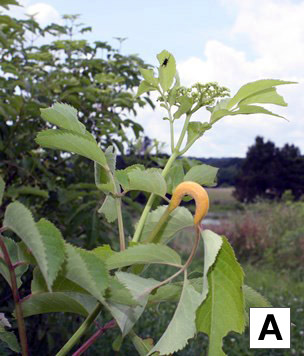 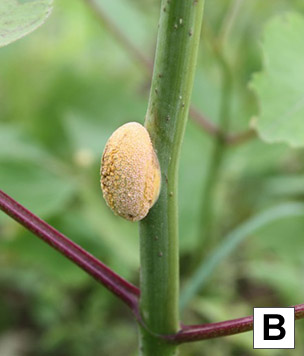 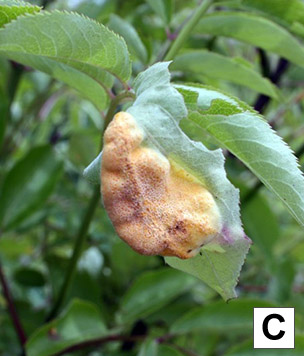 Figure 1
Symptoms of rust (Puccinia sambuci) on (A) petioles, (B) stems and a (C) leaflet of an elderberry plant.

Symptoms of rust can be observed on the leaves, petioles, stems and flowers of elderberry plants in early spring (Figure 2). In early April, bright orange lesions, or pustules, appear on the upper side of elderberry leaflets. When heavily infected with rust spores, leaflets become distorted and often defoliate during the summer months. Stem twisting, bending and curling also occur when numerous rust pustules are present. Flower in cymes may also be covered in gold-colored rust spores during the spring, reducing berry formation and yield. During summer, lesions comprised of aecial cups of rust spores are visible on the underside of elderberry leaflets. By late summer, irregular brown rust spots or lesions surrounded by chlorotic halos can be found on leaves of nearby sedge plants (Figure 3). 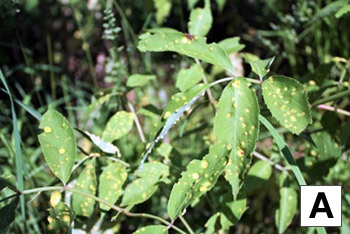 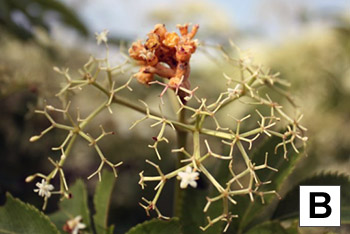 Figure 2
(A) Gold-colored rust pustules on heavily infected elderberry leaflets. (B) Flowers in a cyme covered in rust spores. 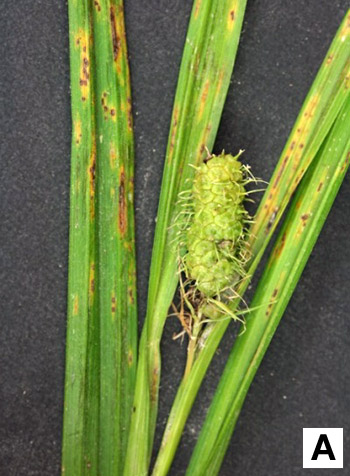 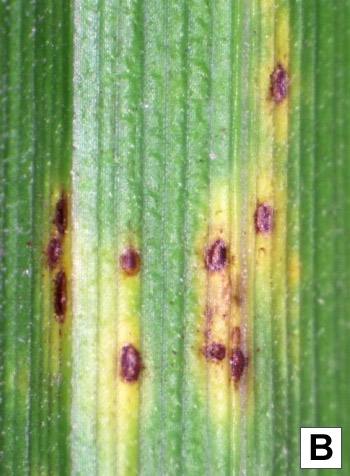 Two host plants, elderberry and sedge, are necessary for disease development. The disease cycle has five spore types: pycniospores, aeciospores, urediniospores, teliospores and basidiospores (Figure 4). In early spring, basidiospores germinate on a sedge plant and are wind-blown onto elderberry plants. Under favorable conditions (air temperatures from 48 to 65 degrees F and elderberry plant tissues remaining wet for three or more hours), rust infection occurs on elderberry. Fruiting structures, known as pycnia form on the upper side of elderberry leaflets during infection and contain pycniospores. By May, long chains of aeciospores form within aecia on the undersides of elderberry leaves. Aeciospores are then released into the air, drifting onto sedge plants. These spores germinate, and urediniospores soon develop within uredinia, forming reddish-brown lesions on the upper side of sedge leaves. Urediniospores continue to infect sedge plants, spreading the rust disease to nearby sedge plants. Later in summer, teliospores are produced with thick cell walls to withstand cold winter temperatures. In the spring, each cell of a teliospore germinates and produces a basidium. Basidiospores subsequently germinate and are wind-blown from sedge leaves to infect elderberry plants. 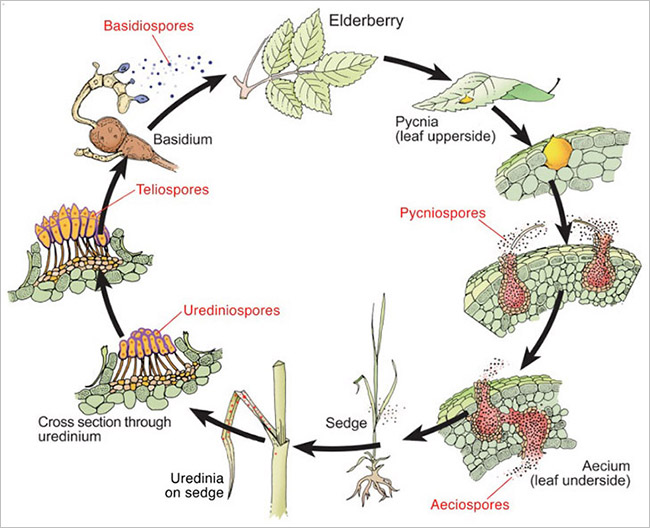 When few elderberry rust pustules are present (less than six per plant), control measures are not necessary. Under heavier disease pressure, control strategies are necessary to prevent elderberry fruit loss. One potential control measure may be eradication of the alternate host (sedge) from the area. However, sedge control is difficult due to sedge’s persistent underground stems called rhizomes, which produce new shoots and roots. Once established within elderberry rows, sedge is impossible to remove mechanically or by hand. Mowing sedge plants regularly to limit seed formation on culms, or stalks, will help limit seed dispersal. Young sedge plants may be suppressed with repeated spot-applications of glyphosate.

For small elderberry plantings, rust-infected plant parts may be pruned and removed from the site. Organic fungicides such as neem oil or Regalia + JMS Stylet oil may provide control when applied to elderberry plants beginning just after leaves emerge from buds in early spring. Fungicides such as Abound, Manzate, Pristine, Propimax or Quash will protect elderberry plants from becoming infected when applied just after leaflet emergence. Fungicides should be reapplied at intervals according to label instructions until mid-May or when temperatures exceed 75 degrees F.

Note
The University of Missouri intends no endorsement of products named herein nor criticism of similar products that are not mentioned.