Summer patch, sometimes referred to as frogeye patch, is a destructive disease of Kentucky bluegrass maintained for golf course fairways, green surrounds, parks and residential landscapes. The disease usually appears two to three years after turf establishment from seed or sod and then reappears in subsequent years in the same location. Summer patch is also a problem on annual bluegrass on putting surfaces. Summer patch was recently reported as a disease of creeping bentgrass in North Carolina. 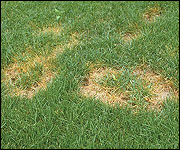 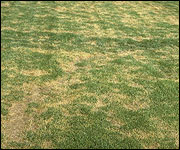 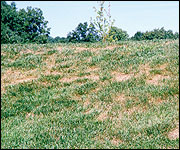 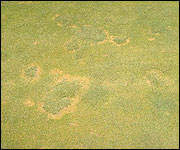 Aboveground symptoms of summer patch in Kentucky bluegrass initially develop in June through August as small patches of turf, 2 to 6 inches in diameter. Grass blades in the patch change to a dull reddish brown, then tan, and finally a light straw color. In the final stages of the disease, circular patches of dead grass form throughout the turf area. Healthy grass often occurs at the center of the patch, resulting in a characteristic frogeye pattern (Figure 1). Circular patch symptoms develop because the fungus grows radially from a central infection point.

When weather conditions are ideal for disease development, affected areas may overlap, resulting in large areas of affected turf (Figures 2, 3). In mixed stands of grasses, the pattern of symptoms is much more irregular.

Roots and crowns of infected plants are discolored (Figure 5). With a compound microscope, darkly pigmented runner hyphae are visible in and around infected roots (Figure 6).

Symptoms of summer patch can be confused with leaf and sheath spot, insect damage (grubs, billbug), or drought stress. These possible causes should be eliminated before a diagnosis of summer patch is made. The best means of confirming this disease is to submit a turfgrass sample along with images of the symptoms to a plant disease diagnostic lab for confirmation. The turfgrass sample should be cut from the margin of the patch that contains both healthy and diseased turf. Ideally, the sample should be 6 inches square and deep enough to include much of the root system.

Although aboveground symptoms of summer patch don't appear until summer, Magnaporthe poae colonizes grass roots and crowns in the spring. It first grows on the root surface (ectotrophically), but later invades the inner root tissue. Conditions in spring are optimal for turfgrass root growth, and even though fungal colonization is occurring, the turfgrass is able to absorb water and maintain growth.

Infected roots either die or become dysfunctional during the hot, dry summer months. Disease symptoms can be particularly severe on south-facing slopes. Infected roots are no longer able to supply adequate water to the foliage and plants exhibit aboveground symptoms of moisture stress. Severely damaged plants may die. In others, recovery is slow because generation of new roots is inhibited by high soil temperatures, and plants cannot rapidly replace diseased roots.

Summer patch is a difficult disease to control. The causal fungus can survive for many years in the soil, and symptoms often develop yearly in the same location. For this reason, on high-profile, high-visibility Kentucky bluegrass stands and annual bluegrass putting surfaces, a preventive fungicide program is recommended. Refer to Table 5 for a list of fungicides labeled for control of summer patch.

Chemical control has not been completely effective in managing the disease but can reduce disease severity if used in conjunction with good turf management. Timing of fungicide applications is critical for effective control. The first preventive application should be made in the spring when soil temperature at a depth of 2 inches remains above 65 degrees F. Timing varies with geographic location, but generally it will be in mid-April in the Midwest. A second application should be made one month after the first.

Summer patch is more difficult to control with chemicals once symptoms develop. Although fungicide at this time may inhibit the fungus, plants are slow to recover because of high temperatures. A light application of nitrogen may be just as beneficial at this time as a fungicide application.

Mowing heights should be maintained above 2 inches on residential lawns. Thatch reduction is important for suppressing disease development, and problem lawns should be dethatched or core-aerated yearly.

Diseased turf should be lightly watered (syringed) daily in the early afternoon to cool the plants and provide moisture for the diseased roots.