Rhizoctonia zeae, which forms pink to orange bulbils (resting structures), received little attention as a turfgrass pathogen until the early 2000s. Since then the fungus has been observed with increasing frequency. There is ongoing research and debate on the identification of these isolates. In preliminary DNA sequencing studies, Tisserat has identified isolates from annual bluegrass from Kansas and Colorado and an isolate from Kentucky bluegrass from Missouri as R. zeae. Others have reported that isolates from annual bluegrass are an unknown Rhizoctonia sp. with a Waitea sp. sexual stage. In this section we are reporting our experiences with this disease. 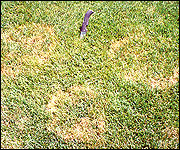 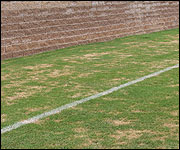 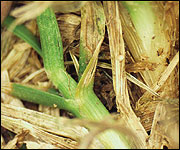 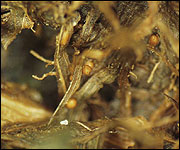 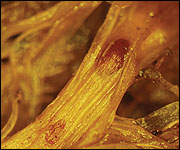 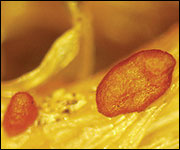 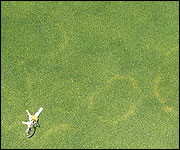 The symptom on Kentucky bluegrass usually appears as sporadic, dinner-plate-sized rings of yellowed grass (Figure 1). The grass to the inside of the patch is usually darker green in color. Sometimes the disease appears to be more of a general blight (Figure 2). Sheath blight symptoms are commonly visible on individual plants at the margin of a patch (Figure 3).

The hyphae (individual fungal strands) of Rhizoctonia zeae have the characteristic right-angled branching pattern typical of other Rhizoctonia species. Additionally, numerous bulbils have been observed in association with this disease on Kentucky bluegrass, perennial ryegrass and tall fescue. The pink to orange bulbils are about the size of BBs and range in shape from round to irregular. Bulbils have been observed on the surface of decaying grass tissue and embedded in leaf tissue (Figures 4 and 5 top).

R. zeae has also been reported to cause yellow ring symptoms on creeping bentgrass and annual bluegrass on putting greens. On mixed greens, the disease usually occurs on one or the other species and not both. Bright yellow rings reaching several feet in diameter form in May and June under moderate temperatures (Figure 6). Leaves and leaf sheaths may not exhibit extensive symptoms, but fungal mycelium characteristic of Rhizoctonia spp. is usually present on tissue. Bulbils have rarely been observed in association with the yellow ring symptom on bentgrass or annual bluegrass in contrast to the disease on Kentucky bluegrass, perennial ryegrass and tall fescue. Symptoms on putting greens may resemble those of fairy ring or yellow patch. Laboratory examination may be necessary for confirmation.

Little is known about the conditions favoring disease development on Kentucky bluegrass, except that in Missouri it has been observed under high temperatures in August. In contrast, ring symptoms on putting greens tend to occur in late spring or fall during relatively mild temperatures.

Cultural management strategies used to suppress other disease caused by Rhizoctonia spp. should be helpful in managing leaf and sheath spot. For example, core cultivation in the fall will help improve infiltration rates and prevent saturated conditions at the surface. Avoid overwatering, especially late in the day. Managing the thatch layer to avoid excessive buildup should also help to manage leaf and sheath spot. Avoid large amounts of quick-release nitrogen when the disease is active.

On athletic fields or other sites with a history of leaf and sheath spot occurring at high temperatures, a preventive fungicide application should be made just before the historic onset of symptoms. For the most part, fungicides used to suppress other Rhizoctonia diseases should also be effective in controlling leaf and sheath blight, although the MBC group has been reported to be ineffective. Variability in efficacy against R. zeae has also been reported among other groups of fungicides. Check local recommendations for recommended fungicides. To date, no products have R. zeae specifically listed on the label.