Pythium foliar blight is one of the most feared turfgrass diseases, because the disease develops rapidly during periods of high temperature and high relative humidity. If left untreated, extensive loss of turf can occur in a few days. The disease is most destructive on perennial ryegrass and tee- or fairway-height creeping bentgrass. Pythium foliar blight is rare on creeping bentgrass putting greens. Kentucky bluegrass and tall fescue are less commonly affected. 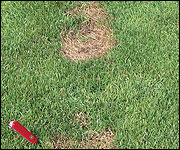 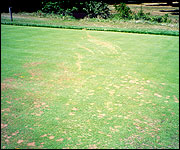 Figure 4
Spread of Pythium foliar blight in direction of water movement across the surface. 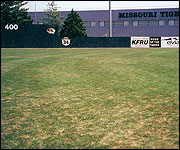 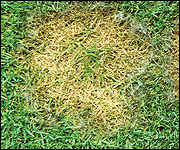 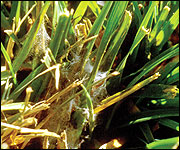 Figure 8
A lobate sporangium (reproductive structure of a Pythium sp.) and hypha with no cross walls.

On creeping bentgrass and perennial ryegrass mowed at fairway height, Pythium foliar blight first appears as scattered patches up to 4 inches in diameter (Figure 1). The patches often have a pinkish to red hue and a frogeye appearance, with greener grass in the center (Figures 2 and 3). The patches may merge and form streaks because the causal agent is readily spread by water movement in drainage patterns or by mowing equipment (Figure 4). Diseased plants eventually turn straw color and wither, resulting in craterlike depressions in the turf (Figure 5).

Pythium foliar blight occasionally affects tall fescue and Kentucky bluegrass during hot, humid weather. Softball-sized patches of water-soaked turfgrass form during hot, wet conditions. Diseased grass blades within the patch tend to stick to one another and have a mushy texture. Spots may coalesce and streaks may also form. Affected plants eventually wilt and die to the crown. However, crowns and roots may not be killed, and plants may recover after several weeks.

When Pythium foliar blight is active, the margins of the patches are gray, and cottony mycelium may be evident, especially early in the morning (Figures 6 and 7). Lobate sporangia (reproductive structures) and hyphae with no cross walls are characteristics of Pythium spp. (Figure 8).

Pythium spp. are also a common cause of damping off and seed rot during turfgrass establishment.

Water management is the key to controlling Pythium foliar blight. Improve drainage in areas where water is likely to stand for any length of time. Avoid overwatering, especially during hot, humid periods. Promote rapid drying of turfgrass by proper spacing and pruning of shrubs and trees. Irrigate between midnight and early morning to reduce the number of hours that grass leaves remain moist.

Preventive applications of fungicides labeled for Pythium blight should be made during the summer months on perennial ryegrass or creeping bentgrass fairways and tees. Refer to Table 5 for a list of fungicides labeled for control of Pythium foliar blight. Although Pythium foliar blight is rare on greens-height bentgrass, an application of a fungicide labeled for Pythium can be made at the onset of Pythium-favorable weather as added insurance. Newly sodded lawns, which must be kept constantly wet until rooted down, may benefit from a preventive fungicide application.