Biological and Integrated Control of Musk Thistle in Missouri

Musk thistle, Carduus nutans L., is a European weed introduced accidentally into the eastern seaboard of the United States in the mid- to late 1800s. It has since spread throughout most of North America, where it has become a weed of considerable economic importance.

Musk thistle spreads by the dissemination of airborne seeds on the wind and by the movement of seed-contaminated hay to noninfested areas. The first report of an infestation of musk thistle in Missouri came from Palmyra (Marion County) in 1941. Its status as a weed pest in Missouri was recognized in the early 1960s, when it became abundant in pastures, primarily in northwest and south central Missouri. This weed, with its showy, reddish flowers, now occurs throughout the state and in 1979 was declared a noxious weed by Missouri state statute (Figure 1). 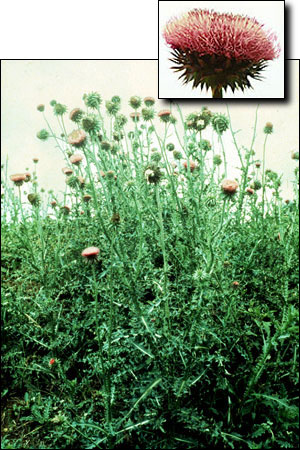 Figure 1
Musk thistle was accidentally introduced into the United States in the late 1800s and is now a noxious weed.

Like most of its close relatives, musk thistle is covered with sharp spines. These grow along the leaf margins and extend down the branches and stems. Leaves are deeply and irregularly indented, with a smooth waxy surface or a somewhat hairy surface. They are grayish green along the outer edge with a lighter green midrib area. Height varies from 2 to 6 or more feet.

The life cycle of musk thistle in Missouri is variable. Although it is generally classed as a biennial (two growing seasons needed for a plant to mature), musk thistle can develop as an annual, biennial or winter annual, depending on local environmental conditions.

Musk thistle reproduces entirely by seed. Seeds generally germinate in the fall or spring, but may germinate anytime moisture is sufficient. About 70 percent of seeds germinate the first year and 20 percent the second year; the rest either blow away or germinate later.

The seed is disseminated by wind currents and can be carried many miles from its original site. Musk thistle produces an average of 10,000 seeds per plant, but under favorable conditions can produce even more.

After seed germination, the plant develops into the rosette stage (Figure 2). The rosette grows and increases in diameter until the onset of cold weather. Then a fleshy taproot develops, allowing the plant to overwinter. The next spring, new leaves originate from crown buds. 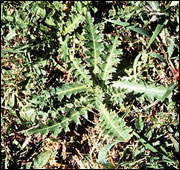 The bolting stage begins when the seed stalk starts to form and continues until the first flower head appears. The plant begins flowering in early to mid-May and continues through August. Flower color varies from purple to a deep reddish pink. The flowers of musk thistle are large, solitary and beautiful. Each flower head is located at the tip of a long stem or branch, which bends or nods and twists as the flower increases in size and matures. The plant dies after all its seeds mature.

Musk thistle is not a serious weed problem in crops requiring a spring seedbed preparation. Tillage easily eradicates rosettes established during the preceding summer or fall.

Musk thistle, however, can be a problem in fall-planted grains, alfalfa or clover if conditions are favorable for seedling establishment and winter survival. The weed is found most commonly along roadsides, railroad rights-of-way and fence borders and in wastelands and pastures. Check fencerows, ditch banks and waste areas periodically for musk thistles. Newly established thistle rosettes are inconspicuous and you may not see them until they bloom the following year.

Missouri landowners spend between $750,000 and $1 million annually to control musk thistles with herbicides. Chemical control can be effective if properly timed. Apply or other registered herbicides to the musk thistle rosettes in either fall or spring. Applications made after the plant bolts are too late for good control. Although treated plants may appear to be injured, with wilted leaves and twisted stems, the plants will nevertheless flower and produce viable seed. For optimum control, apply herbicides while musk thistles are in the rosette stage or pre-bud stage.

Infestations of musk thistle often occur in areas difficult to reach and may escape notice until after flowering. Farmers are usually busy in the spring and may postpone chemical application until they are caught up with field work. Since musk thistle seeds are long-lived in the soil, it is important to prevent plants from producing seed until new rosettes are no longer produced. The effective eradication of this weed pest from an infested pasture requires dedication and perseverance because of the longevity and viability of seeds (five to seven years) in the soil.

Specific natural enemies of musk thistle can aid in regulating the spread of this weed. Such natural enemies include the musk thistle rosette weevil and the musk thistle flower head weevil (Figures 3 and 4) and a musk thistle rust fungus (Figure 9). The larvae of the rosette weevil feed on the underside of the leaves of the rosette and on the leaves and stems of bolted plants; larvae of the flower head weevil feed in the base of the developing flower of the thistle. The two weevils are compatible with each other as biological control agents because they do not compete with each other. Natives of Europe, the weevils were studied extensively to ensure that they would not damage economic plants in this country. Entomologists with the USDA Agricultural Research Service Biological Control of Insects Research Laboratory in Columbia, Missouri, released flower head weevils in 1975 near Marshfield in Webster County; rosette weevils were released in 1979-80. In areas of the state where the weevils have been present for the longest period of time, a 70-90 percent reduction in thistle population has occurred (Figure 5). Populations of the musk thistle weevils have increased throughout the state through natural dispersion and through collection and recolonization. 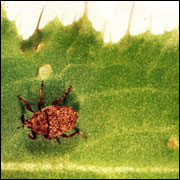 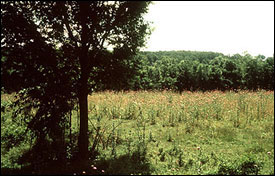 Figure 5
Musk thistle dominated this field, left, in 1975, before introduction of the flower head weevil. 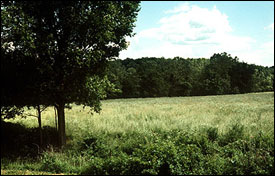 By 1985 the field was nearly clear of musk thistle. 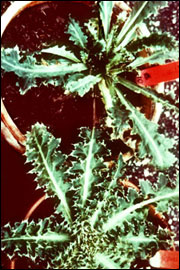 Figure 6
Rosette weevil larvae feed on the growing center of the top plant, producing a necrotic area. A healthy plant is below.

The rosette weevil is about 1/8 inch long with a narrow snout. It undergoes one generation per year. Adult weevils emerge from estivation (summer hibernation) in early October. They feed on the underside of rosette leaves by puncturing leaf tissue. Mating takes place shortly thereafter, and subsequent egg laying occurs during the fall and on warm days during the winter. These same adults overwinter and resume egg laying the following spring until about May 1. The eggs are usually laid in the midrib on the underside of rosette leaves or placed directly in the rosette crown. In late spring, some egg laying can be found in secondary buds.

Hatching larvae from eggs laid on the rosettes burrow their way to the growing center or crown bud. There they feed on the meristemic tissues, producing a necrotic area that enlarges and becomes evident by spring. Larval feeding can kill a rosette outright or it can change the growth pattern of the thistle, giving rise to a shorter plant that produces fewer flower heads that are smaller and contain less seed. After the larvae have completed their development, they leave the rosette and pupate in the soil. The emergence of new-generation adults occurs from mid-May until mid-June.

The flower head weevil is about 1/4 inch long. After overwintering as adults, the weevils emerge in early spring and feed on the leaves of musk thistle rosettes. Mating takes place shortly thereafter, and by the time musk thistles begin to bolt, the females are ready to lay eggs. By mid-May, most musk thistles have budded or flowered.

Flower head weevils lay eggs on the bracts of developing flowers (Figure 7) and cover each egg with a secretion of chewed plant material. This secretion gives the eggs a dirty, scale-like appearance. Each female lays an average of 100 eggs during its lifetime. 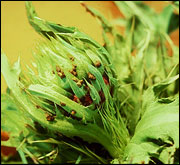 The eggs hatch in six to eight days. The larvae tunnel into the receptacle, the swollen base of the thistle flower, where they feed (Figure 8). As many as 40 larvae have been found per terminal head. The number of larvae per head decreases as more flowers develop. Some flower heads turn brown prematurely because many larvae are feeding in the receptacle or because larvae are feeding in the stem just below the receptacle. If you see incompletely filled flower heads with dead plant tissue in the center, you might suspect that musk thistle weevils are present. 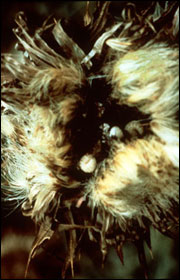 Figure 8
Flower head larvae feed in the base of the flower head, exposed here.

Larvae take about 25 to 30 days to complete development. They stop feeding and begin a resting stage, called pupation, which lasts another eight to 14 days. The pupa rests in an excavated cell in the receptacle, where it transforms into an adult.

The adults emerge in July and seek overwintering sites under new musk thistle rosettes and ground litter and in wooded areas, where they will remain dormant until the following year. For this reason, the insect is said to produce only one generation per year in Missouri.

A third biological control agent for musk thistle is a rust fungus. This exotic disease of musk thistle was introduced from Turkey and released in Virginia in 1987. By 1997 it was detected in 37 counties in Missouri. The disease appears as brown pinpoint pustules first on the leaves (Figure 9) and then on all parts of the musk thistle plant. Although the disease does not kill the plant or reduce its seed production, it coexists with the musk thistle weevils and apparently does not interfere with their feeding on the thistle. 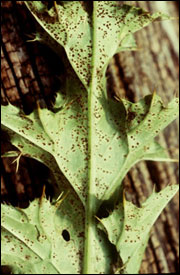 Figure 10
An integrated control program for musk thistle takes into consideration the life cycle of the musk thistle weevils and the seasonal development of the plants.

An integrated pest management approach to musk thistle control takes into consideration the life cycle of the musk thistle weevils in relation to the seasonal development, or phenology, of the thistle (Figure 10). To minimize adverse effects on the flower head weevil, herbicides can be applied from mid-March to late April, mowing can be done in mid-July, and herbicides can be applied again in September and October. Where the flower head and rosette weevil are considered together, mowing can still be practiced in mid-July, but spraying should be restricted to a narrow period from September to mid-October. This approach maximizes thistle control and is least disruptive to the weevils. Pasture management practices such as seeding and fertilization to increase grass and forb production increase competition with the thistle and can be substituted for spraying.

Musk thistle weevils are widely distributed in Missouri. You can determine whether you have infestations of the flower head or rosette weevils by looking for larvae of these insects at the appropriate season (Figure 10). Flower head weevil infestations are easiest to find when the musk thistle is blooming (June). Find several of the flower heads that formed earliest. While grasping a flower head on each side, break it in half. In the region of seed development, small, white, grublike larvae should be present if the thistle plant is infested with flower head weevils.

If both flower head and rosette musk thistle weevils are present, mow in mid-July and spray rosettes in September and October for best weed control and least harm to the weevils.